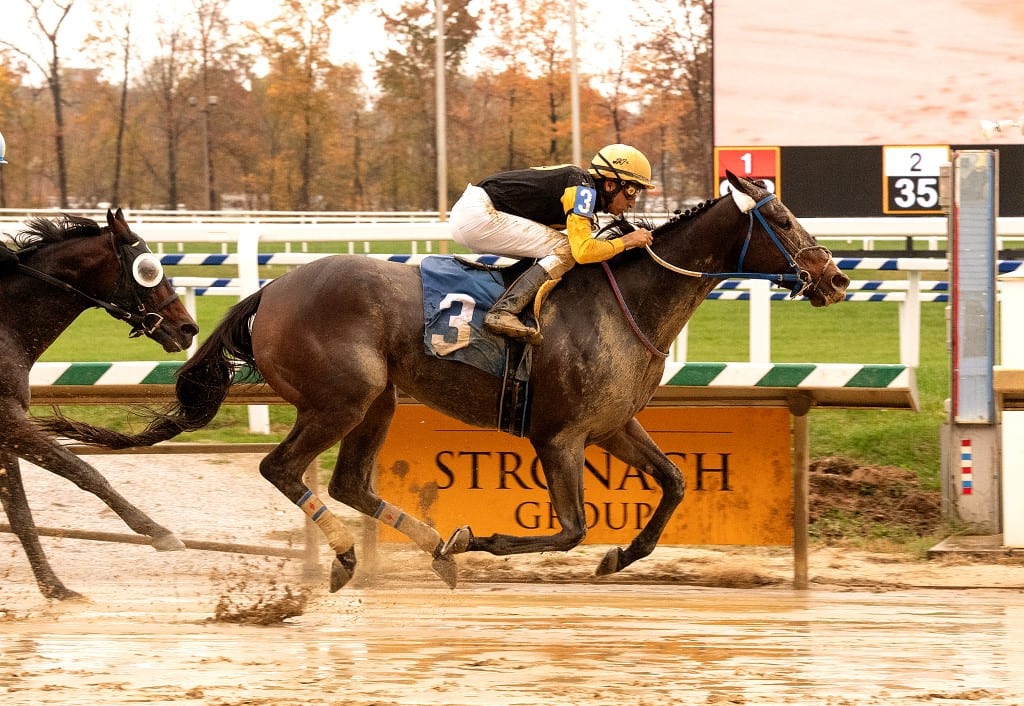 Caonabo Stable’s multiple stakes winner Clubman, beaten as the favorite in the $150,000 Maryland Million Classic Oct. 19, bounced back with a 1 ¼-length victory in Thursday’s feature as live racing returned to Laurel Park.

Thursday’s 10-race card was the first at Laurel since Oct. 20. The last live programs scheduled for Oct. 24 to 27 were cancelled to repair a broken water pipe on the apron along the outer rail of the main track.

Ridden by Julian Pimentel for trainer Rodolfo Sanchez-Salomon, Clubman ($7.20) ran six furlongs in 1:09.93 over a sloppy main track in the open $55,000 allowance for 3-year-olds and up. It was the 10th career win in 35 starts for the 5-year-old Not For Love gelding, and first since the Maryland Coalition Stakes Aug. 24 at Timonium.

Old Time Revival led the way through fractions of 22.62 and 45.69 seconds tracked by multiple graded-stakes placed Vorticity, racing for the first time since August 2018. Pimentel put Clubman into a contending position on the turn, swooping to the lead in mid-stretch and pulling away.

Clubman has made 11 starts this year, seven in stakes, also winning the Russell Road April 20 at Charles Town. Thursday was only his second non-stakes start since mid-March.

“We’ll go back in an allowance or look for another stake,” Shankle said. “We’ll see how he comes back…”

Daniel Green’s Here Comes Mongo took the lead rounding the far turn and extended it through the stretch to pass the wire 5 ½ lengths in front and give 20-year-old Union Bridge, Md. native Taylor Leatherman her first career riding victory.

Here Comes Mongo ($24), a 3-year-old gelding trained by Ann Merryman, won the Longines FEGENTRI Championship race in 1:42.35 over a sloppy main track. The $22,000 maiden claiming event for 3-year-olds and up was originally carded for 1 1/16 miles on the Exceller turf course.

In addition to the farm, Leatherman has also worked as an exercise rider and member of the pony team for the Maryland Jockey Club at Laurel and Pimlico Race Course. In 2017, she galloped Preakness contender Royal Mo for California-based trainer John Shirreffs at Pimlico prior to the colt’s career-ending injury two days before the race…

Shortleaf Stable’s homebred Tale of the Cat colt Crocketts Bluff, with Forest Boyce aboard for Hall of Fame trainer Shug McGaughey, graduated in his second career start with an 10-1 upset of Thursday’s sixth race, a $40,000 maiden special weight for 2-year-olds. The winning time for one mile was 1:39.22…