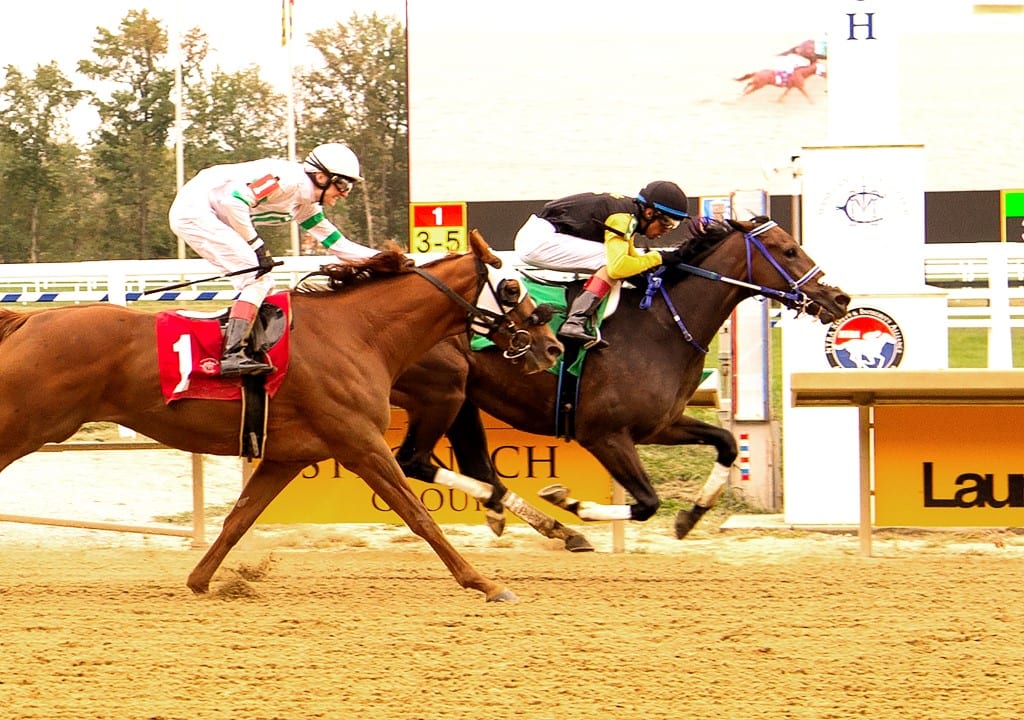 When Empty Tomb made his debut, in August at Colonial Downs, bettors made him the 9-10 favorite, and why not? A son of Speightstown, he was a $190,000 auction purchase for China Horse Club, which co-owns him with WinStar Farm, and the owners had given him to the hard-hitting barn of Arnaud Delacour.

He didn’t run especially well that day, making a belated move to finish a non-threatening third behind Speed App, and the bettors don’t seem to have forgiven him since.

The sophomore colt was nearly 6-1 in his follow-up, a one-mile contest which he won easily at Laurel Park on September 8, and he was the 2.70-1 third choice today in a first-level allowance at Laurel. Maybe now — after he pressed the early pace, grabbed the lead after three-quarters of a mile and went on to win by three parts of a length — the bettors will start to take notice.

“He keeps improving,” Leigh Delacour, assistant trainer to her husband Arnaud, said after the race. “He’s still very green, but that was a good effort.”

Top Me Off, a 10-1 outsider, grabbed the early lead in the 1 1/16-mile contest, and Jorge Vargas, Jr. was able to move Empty Tomb up to press that rival while in the clear. The pair were two lengths apart, with no other runners in shouting distance, after a half-mile in 47.94 seconds.

:I wanted him to be awake out of the gate,” Delacour said. “He’s very much the big baby. If you don’t ask him to do it, he might not.”

Vargas and Empty Tomb moved up to even terms rounding the turn, took command nearing the lane, and opened up a tw0-length advantage  in mid-stretch. Absolved, the 9-5 favorite, mounted a late rally and was chopping into the lead late but was never a threat to get to the winner.

Empty Tomb now has two wins from three starts and earnings of $52,740. Delacour said she and the team would wait to see how her charge had come out of the and to talk with the ownership group before determining their next move.

LAUREL PARK NOTES Xmasinthecity won a maiden special weight to kick off the card, taking the 5 1/2-furlong grass race by a neck in 1:02.73 for trainer Mike Trombetta and owner/breeder R. Larry Johnson… Running time of Empty Tomb’s race was slightly slower than the 1:42.22 recorded by Harpers First Ride for the same distance in winning a Maryland-bred allowance two races prior…