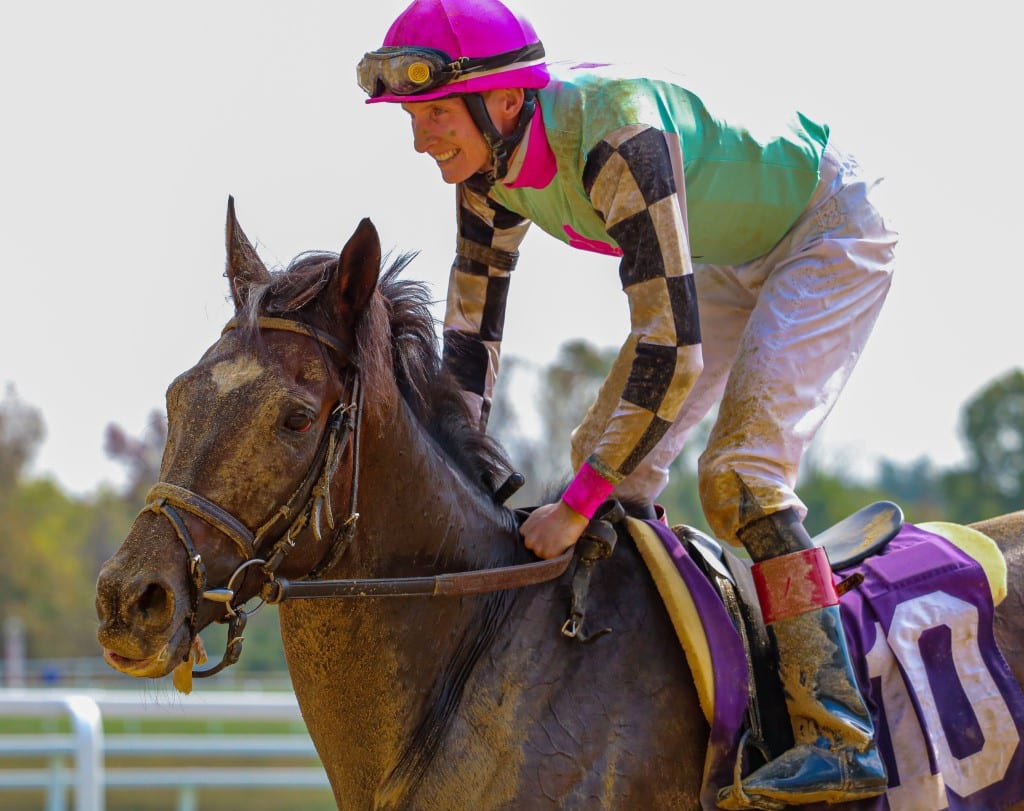 Trevor McCarthy was all smiles after Tiz He the One took the Challedon. Photo by Dottie Miller.

On a day when horses of all ages and both genders were asked to display their talents on turf and dirt at Laurel Park, it was jockey Trevor McCarthy who proved to be the most adaptable when he steered home five winners, four of them in the stakes on Saturday afternoon.

Tiz He the One kicked off the stakes portion of the card on Saturday by rallying from well off the pace under McCarthy to capture the $75,000 Challedon for older runners that had never won a stake. A five-year-old Tiz Wonderful gelding trained by Linda Rice for the Lady Sheila Stable and Iris Smith Stable, Tiz He the One notched his fifth win in six starts over the Laurel Park track by getting the seven furlongs in 1:22.17. It was his fifth win in 11 career outings, all of which have come over the Laurel main strip.

“He’s always been one of my favorite horses to ride,” McCarthy said. “I remember giving up a whole card of mounts here to go ride him at Oaklawn Park. He’s such a cool horse. I was glad to be aboard him today when he got his first stakes win. I know every time he ships in here he’s going to run well. He loves this track and I’ve always being able to ride him.”

Then one race later on the card, McCarthy steered Miss J McKay to a handy, five-length score in the $100,000 Anne Arundel Stakes for two-year-old fillies on the turf. A juvenile daughter of Hanover Kid trained by Cal Lynch, Miss J McKay has actually crossed the wire first in all three of her starts – she was disqualified from first and placed third after taking the $70,000 Colleen Stakes at Monmouth Park – but rebounded to take the Anne Arundel and next appears likely for the Maryland Million Lassie on the main track.

“We had to wait a few minutes in the gate before they turned us loose, but that happens,” McCarthy said. “She was ready to run today. She just pulled me up to those other horses on the far turn. She finished really well and I never really had to get after her. She showed her class today.”

Then one race later in the $75,000 Shine Again for older fillies and mares that had never won a stake, McCarthy steered Our Super Freak to a mild 5-2 upset when she rallied widest of all to score by two lengths while getting the seven panels in 1:22.98. A sophomore daughter of Mineshaft trained by Jamie Ness for owner Jagger Inc., Our Super Freak recorded her second win in 11 starts this year and now owns a 4-6-4 slate and $235,000 banked from 17 career outings.

“She broke well, but I was able to sit well off the pace with her today,” McCarthy said. “When I asked her to run on the far turn, she was really going well. We were a little wide on the far turn and through the lane, but she had plenty of kick when I set her down turning for home. She’s usually run well when I’ve gotten on her in previous races at Delaware Park.”

McCarthy capped the stakes portion of the card by steering So Street to a three-length score in the $100,000 Howard County for two-year-olds on the grass. The juvenile son of Street Magician trained by Jamie Ness notched his third win in five starts and punched his ticket to the Maryland Million Nursery while getting the 5 1/2 furlongs in 1:03.55.

“I thought this colt was going to sit just off of them down the backside,” McCarthy said. “But he was really sharp down the backside and he just pulled me right to the front. I was fortunate to have a lot of really good mounts today. Hats off to the guys who get aboard the horses in the morning and have them ready for me. It’s tough just to win one stakes on any given day, but to be able to win four of them on one day is special. It’s definitely a first for me. I’ve had some really good days here over the years, but four stakes is a new best for me anywhere.”

McCarthy had kicked off the card by steering Strike Me Down to a 4-5 tally in the opener, a two-turn allowance on the grass for older horses for trainer Graham Motion. McCarthy had finished second aboard the four-year-old Tapit gelding in the $60,000 Tale of the Cat Stakes 15 months earlier at Monmouth Park in his only previous mount aboard the Motion trainee. Strike Me Down had been idle since running fourth in the Grade III Ontario Derby last October, but debuted with a victory under McCarthy in the Saturday opener at Laurel.