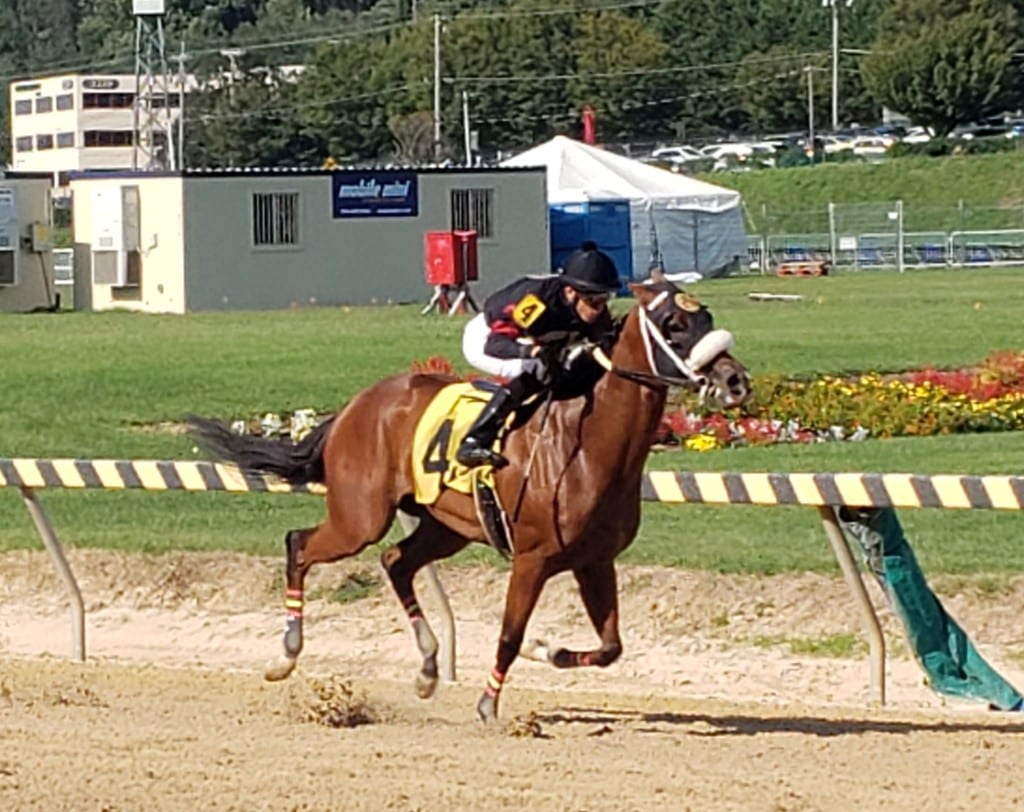 Marvelous Martina dominated in winning a Timonium allowance. Photo by The Racing Biz.

Heading into Friday’s featured eighth race at Timonium, trainers Jose Corrales and Anthony Farrior had had almost the exact opposite experience during the 2019 meet.

But the roles switched in the featured allowance, with the Corrales-trained Marvelous Martina powering to a 3 ½-length victory over Farrior’s Turkmenistan, who was second under Arnaldo Bocachica.

“I love that filly,” said winning rider Luis Batista, also winning for the first time at the meet. “She’s a nice filly.”

Marvelous Martina had just a single win from 10 career starts entering the contest, but she had kept the right sort of company after breaking her maiden at first asking; all nine of her subsequent starts had come in allowance company, in which she had been second or third five times.

In Friday’s 6 1/2-furlong first-level allowance, it was the Gerald Brooks-trained Dance Or Stroll who sped to the early lead, with Marvelous Martina her nearest pursuer, perched just a length back while three wide on the course.

They were one-two through a quarter-mile in 23.20 seconds and a half in 47.44, with Farrior’s Turkmenistan just behind them after a half-mile.

But Marvelous Martina seized command shortly thereafter and widened her lead easily while under a drive in the lane. The three-year-old daughter of Awesome Again stopped the timer in 1:18.04 to earn the victory. Turkmenistan was a hard-trying second, while Dance Or Stroll held third. Favored The Factor’s Fact, in her first appearance since January, was never much involved and finished fifth in the five-horse field.

Marvelous Martina returned $5.60 to win as the second choice, and the exacta was good for $7.60 on a one-dollar wager.

“Everything went perfect like we wanted,” Batista said. “She was much the best. She’s a classy filly.”

BIG T NOTES Apprentice rider Avery Whisman lodged his first two victories of the meet on the Friday card, while Ashley Castrenze and Alcibiades Cortez each won one race to up their meet totals to four, one behind meet leader Arnaldo Bocachica. Cortez had just one win on the season prior to opening of Timonium… The day’s most impressive win may have been that of three-year-old Hargus. The Robbie Bailes-trained sophomore won a $16,000 never-won-two claimer by six lengths under Castrenze while stopping the clock in a sharp 1:17.10 for 6 ½ furlongs… Trainer Cal Lynch scored with Two Step Sis in the fifth race Friday, giving him three wins in four starts on the meet… Saturday’s feature is the $75,000 Timonium Distaff for Maryland-bred or -sired fillies and mares…