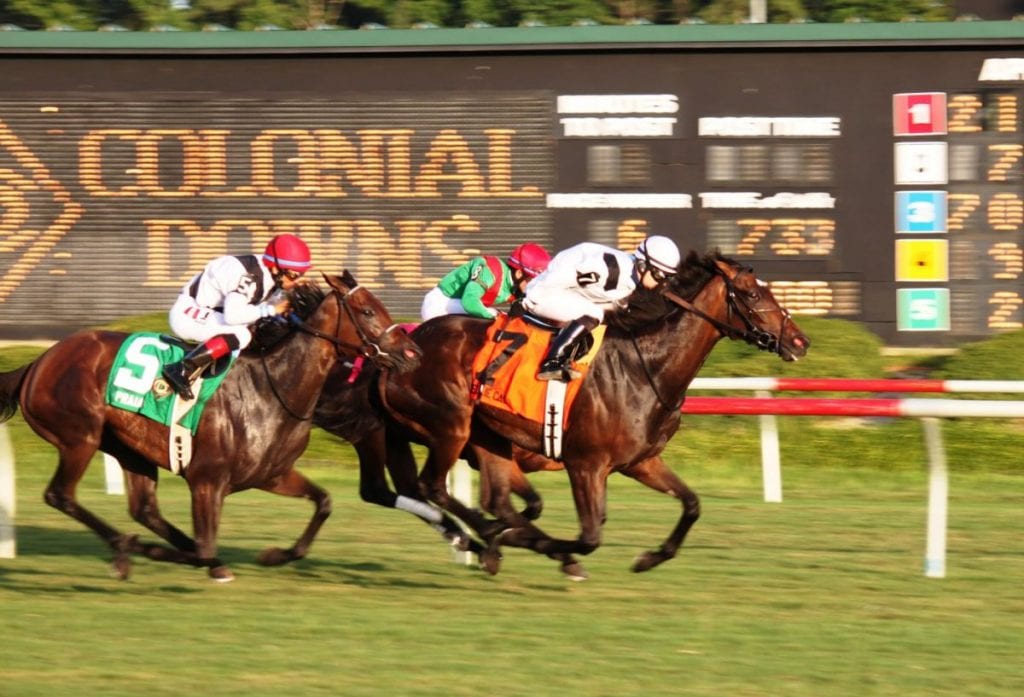 Forest Boyce, aboard Nellie Cashman, upset the Virginia Oaks in 2013, the last time it took place at Colonial Downs. Photo by Nick Hahn.

A field of nine will compete in $150,000 Fasig-Tipton Virginia Oaks, highlighted by Virginia-bred Tasting the Stars who is the early 5-2 choice. The Bodemeister filly is a perfect 3-for-3 in her young career and won the $75,000 Just Jenda Stakes July 28 at Monmouth. The Mike Stidham trainee will be ridden by Horacio Karamanos. Out of the Awesome Again mare, Pink Champagne, Tasting the Stars was bred by Audley Farm Equine.

Lael Stables’ Gardenista is the second choice in the morning line at 9-2. The Curlin filly has finished third or better in seven of eight starts including an allowance win at Laurel last out.

The Graham Motion-trained Mercilla captured her first two wins on turf in France last November and at Pimlico on May 23. She most recently finished a distant fifth in Delaware Park’s Christiana Stakes June 19 but the race was taken off the grass and held on dirt.

“I wanted to kick myself afterwards for running the horse on dirt,” said Motion. “Since that race, I decided to wait for the Virginia Oaks at this distance.” Mercilla is by Arch out of Junkinthetrunk by Top Account.

Ionic and Zonda follow next at early odds of 6-1. The former, trained by Arnaud Delacour is 2-for-3. Her only blemish was a runner-up effort at Laurel April 27 where she lost by a nose. The latter is conditioned by James Lawrence and prevailed opening night at Colonial Downs. The Scat Daddy filly won by a neck with Trevor McCarthy up but Feargal Lynch gets the call Saturday.

Rounding out the field (with trainers listed) are Solar Kitten (Ian Wilkes), Sweeter Than Wine (Anthony Margotta), Carnival Colors (Mike Stidham) and Agi’s Cait (Mike Campbell). The Oaks is the eighth race on the card and will go to post at 8:15 PM.