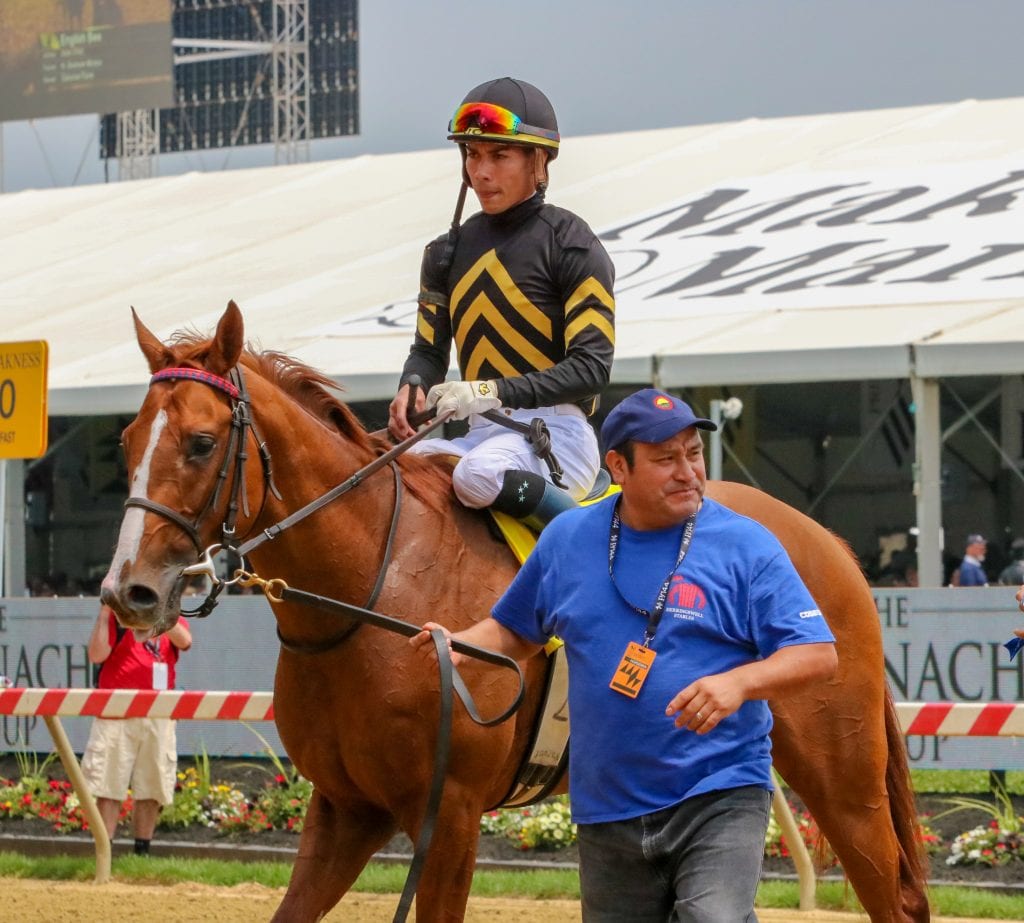 Calumet Farm’s English Channel colt English Bee and their Street Sense colt Tracksmith lead a field of nine 3-year-olds that will compete over 1 1/8 miles Saturday in the 17th running of the $250,000 New Kent County Virginia Derby (Gr. 3) at Colonial Downs. The Virginia Derby along with the $150,000 Fasig-Tipton Virginia Oaks headline a stakes laden card of racing that begins at 5 PM ET. The undercard features the Exacta Systems Rosie’s Stakes and the Thoroughbred Aftercare Alliance Kitten’s Joy Stakes, each of which carry a purse of $100,000. All four stakes will be contested over the Secretariat Turf Course.

Racing fans around the country can enjoy Derby Day action from Colonial Downs on TVG and via the Horse Racing Radio Network (HRRN). Gabby Gaudet will broadcast on site from the New Kent track for TVG on the 30th and 31st. HRRN will be broadcasting live from Colonial 8-10 AM on Derby morning and again Virginia Derby night.

Through the investment of the Colonial Downs Group, a subsidiary of Peninsula Pacific Entertainment, Colonial Downs has experienced a racing revival for the 2019 season, and Saturday’s program will feature the return of the Derby and the Oaks after a six-year hiatus.

Trainer Graham Motion has entered a trio that includes 5-2 morning line favorite English Bee, who raced against his stablemate and Derby entrant Shootin the Breeze in the James Murphy Stakes May 18 at Pimlico. English Bee won the black-type stakes while Shootin the Breeze was third. Most recently, he was fourth in the Grade 2 National Museum of Racing Hall of Fame Stakes August 2 at Saratoga and 10th in the Belmont Derby Invitational Stakes July 6. For the year, he has two wins from five starts and a bankroll of $100,650. Overall, the Kentucky-bred has $132,150 in earnings from eight starts. English Bee is out of the Kitten’s Joy mare, Evil Kitten.

Tracksmith, a perfect 2-for-2 this year with earnings of $101,008, is fresh off a half-length win in the Frisk Me Now Stakes at Monmouth on July 27. The Joe Sharp trainee, who is 3-1 in the morning line, was best by a head in a Churchill Downs allowance one month prior. Last summer, he won a maiden special weight at Ellis Park and missed by a head in the $400,000 Kentucky Downs Juvenile Stakes. Overall, Tracksmith has won 3 of 6 starts for earnings of $204,033. All but one of his starts has come on turf. The lone dirt effort was a sixth-place finish in the Grade 2 Kentucky Jockey Club Stakes over a sloppy track at Churchill.

Credit Swap is the third choice in the early line at 4-1 and is fresh off a four pack of in-the-money finishes. The 3-year-old Exchange Rate gelding started the streak at Fair Grounds last November and after a seven-month layoff, followed with runner-up efforts in the Stanton Stakes at Delaware Park and the My Frenchmen Stakes at Monmouth Park. Credit Swap is owned by Marc Winston, George Schifano and Rob Auerbach and is trained by Mike Stidham.

The Motion-trained Shootin The Breeze has eight starts with earnings of $67,692. Since breaking his maiden at Tampa Bay Downs in January, the Hard Spun colt has collected a pair of seconds and thirds in allowance company at Belmont, Keeneland and Gulfstream until a sixth-place finish most recently at Saratoga. The Kentucky-bred is out of Prof. McGonagall by Storm Cat and is owned by Alex Campbell.

Jais’s Solitude is coming to New Kent off a string of four solid turf outings. The Eddie Kenneally trainee captured an allowance optional claimer at Arlington July 27 and before that came up a nose shy at Keeneland in an $81,000 turf allowance. The Afleet Alex gelding had respective third-and-second place finishes at Tampa in the Sophomore Turf Stakes and in an allowance. Jais’s Solitude is out of the Notebook mare, Privacy, and is owned by Mike Anderson Racing.

Completing Motion’s trio is Solidify who was sixth most recently in the Grade 3 Kent Stakes at Delaware Park. The Tapizar colt won a pair of races last fall at Woodbine including the Grade 3 Grey Stakes. He has bankrolled $93,197 from four starts.

Chilly in Charge is coming off a fifth-place finish in the Grade 3 West Virginia Derby but prior to that, was dominant in the $100,000 Crowd Pleaser Stakes at Parx. The Take Charge Indy colt won by 12 lengths in a race that was taken off the turf. Interestingly, Crowd Pleaser won the inaugural Virginia Derby in 1998. Chilly in Charge is a Pennsylvania-bred out of the Harlan’s Holiday mare, Holiday Chills. He is trained by Miguel Vera for the Newtown Anner Stud.

Rounding out the field are a pair with more experience than any others in the field. Critical Data has 13 starts and Changi has 12. The former is an Irish-bred trained by Richard Valentine. The Battle of Marengo colt has had three outings in the U.S. including a fourth in the Grade 3 Kent Stakes July 6. The latter is owned and trained by Jeanne Dolan and comes into the race off a fourth-place run in the Jersey Derby Stakes at Monmouth. He is by Giant Oak out of Our Miss Brookside by The Cliff’s Edge.

The New Kent County Virginia Derby has been carded as the ninth of 10 races and will go to post at 9:00 PM. New Kent County has an English history that dates back 400 years. It is the second fastest growing locality in Virginia and is home to four golf courses, three wineries, three rivers and historic landmarks like St. Peter’s Parish Church, known as “The First Church of the First First-Lady.”