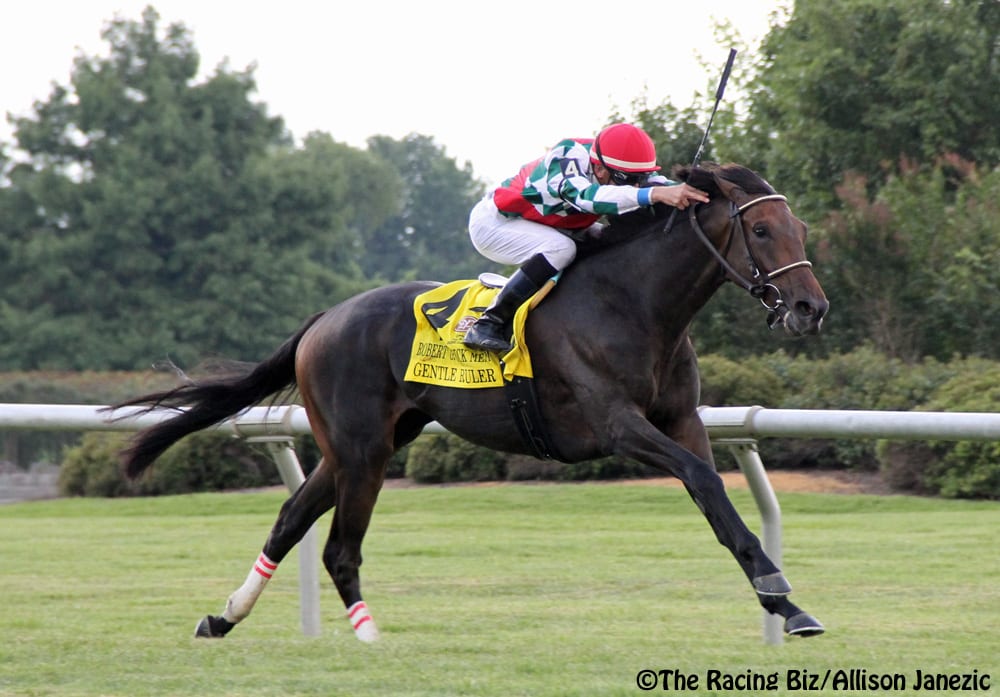 With Chris Landeros aboard, the daughter of Colonel John won by 2 3/4-lengths and returned $9.40 as the second choice in the field of eight. Theodora B, with Alex Cintron finished second a neck in front of the even-money favorite Gaining with Shaun Bridgmohan in third. Gentle Ruler covered the mile and three-eighths in 2:13.70 over a firm turf course.

The Kentucky-bred conditioned by Ian Wilkes raised her career record to four wins from 15 starts with earnings of $340,053. After taking eleven attempts to break her maiden, she has reeled off four straight victories. On March 28, she broke her maiden going a mile and a sixteenth at Gulfstream, she followed with mile and a half turf allowance victory at Keeneland on April 24 and then with a victory in the mile and a half Keertana at Churchill Downs on May 25 before her score in the Robert G. Dick Memorial.

“She has come a long way, it took her a little while for her trainer to get her to break her maiden, but since we got that figured out, she has been brilliant,” said winning trainer Ian Wilkes. “Seriously, the difference is that she had always been kind of a quirky filly. She always had to do everything with a pony. She could not go to the track without a pony and she could not back up without a pony. She just would not do anything without a pony. This year, she has matured and she is a much better filly because of it. It is as simple as that. She is really getting into a good niche here with her ability to relax. The thing that I noticed today that I really liked was the first time they went by, you could see her listening to Chris (Landeros). She had her ears going back and forth and you could tell she was listening to him. We will probably run her next at Saratoga, but we want to make sure she is okay and comes out of this race in good shape first.”

NOTES In the day’s ungraded dirt stake, the redoubtable Massachusetts-bred Dr Blarney posted his 20th victory in 28 starts, taking the $50,000 Carl Hanford Memorial Stakes by 4 1/2 lengths under regular pilot Tammi Piermarini. The win pushed the Karl Grusmark trainee past the $600,000 mark in career earnings. Dr Blarney went off the second favorite but easily topped favored Just Whistle, who was second, a nose ahead of Reride. Dr Blarney paid $6.40 to win and topped an exacta worth $10 for a buck… Total handle on the nine-race card was $2,805,204. That was nearly 14 percent more than the track handled on an 11-race program for last year’s Delaware Oaks…