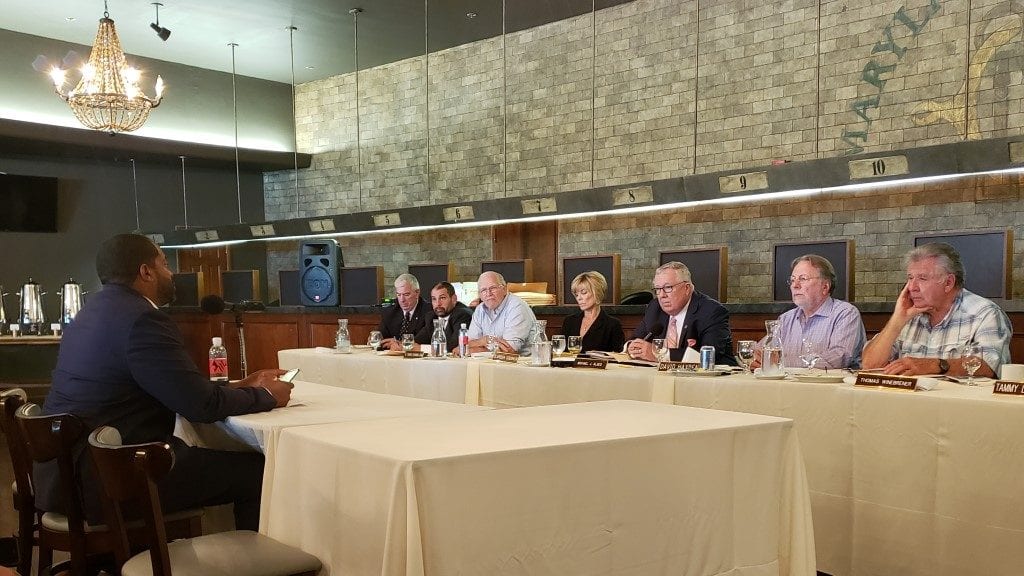 It might not yet be time for fans of Pimlico Race Course to celebrate. But for the first time in a long time, there’s a possibility that the light at the end of Old Hilltop’s tunnel is not that of an oncoming train.

The Thursday afternoon edition of the monthly Maryland Racing Commission — which seemed in prior days like it might be contentious — turned unexpectedly friendly as Commissioners learned of what multiple people called “good-faith negotiations” between The Stronach Group, parent company of the Maryland Jockey Club, which owns Pimlico, Laurel Park, and the former Bowie training center, and Baltimore City.

“They really do believe they can get something done — that’s music to my ears,” Commission chairman Michael Algeo said after the meeting. “I don’t want to get too optimistic, don’t want to jump the gun on that. But that’s a big step forward from lawsuits and volleys back and forth.”

“I can’t tell you how happy I am to hear people speak of the possiblity of Pimlico remaining the home of the Preakness for years to come,” agreed April I. Smith of the Friends of Pimlico group.

The negotiations include attorney Alan Rifkin, representing The Stronach Group; former Baltimore Development Council head Bill Cole, speaking for the city; and horsemen’s group representative Alan Foreman. The three appeared together before the Commission this afternoon.

“We’ve been asked to explore the ways and means to preserve and enhance the Preakness in Baltimore City,” to foster the sustainability of racing in the state, and to determine what facilities are necessary to accomplish those goals, Rifkin told the Commission.

“There is nothing more significant to us… than finding a solution,” he added. “It will be resolved if it can be resolved.”

Pimlico — an aging facility with a rich history but an infrastructure the Stronach Group chief operating officer Tim Ritvo described as “ancient” — has been the focal point of what turned into a pitched battle between the Stronach Group and Baltimore City.

The company has argued the business environment in the racing industry — which has seen wagering handle drop by nearly 50 percent nationally in the last 15 years — compels them to centralize operations at a single facility and that Laurel Park is the logical site for its proposed “super track.”

The city has countered by saying that moving the Preakness — the city’s “annual Super Bowl,” as some have called it — would be a death knell for the neighborhood surrounding Pmilico and that the company has been engaged in what amounts to “demolition by neglect,” allowing the facility to crumble in hopes that the Commission would permit it to move the state’s biggest annual sporting event to Laurel.

Legislative proposals advanced by the sides during the recently-completed session of the state General Assembly both failed to move from Committee.

In June, Baltimore Mayor Bernard “Jack” Young agreed that the City would withdraw a lawsuit it had filed seeking to take possession, via condemnation, of Pimlico and the Preakness.

That decision, Young said in a statement, was “to give the parties an opportunity to discuss Pimlico and racing in Maryland.”

“My goal is to protect the racing industry,” Foreman said of his role in negotiations. “I firmly believe we can make Maryland racing not only the epicenter of racing in the Mid-Atlantic but in the whole country.”

Of course, there’s a long way to go to get there. Among the key issues in what Rifkin called “a difficult problem” are what a new Pimlico might look like, how much it would cost — a pair of Maryland Stadium Authority reports came up with two different proposals, ranging from around $200 million to more than $400 million — who would pay, and how all that could be accomplished without undermining what the industry has achieved in recent years.

Ritvo, who characterized the discussions as “good-faith negotiations,” observed, “We’re just trying to figure out a pathway that works. We need to present a win for the city of Baltimore, the state, and the horsemen that race with us all the time; that’s what we’re trying to accomplish.”

His company has been firm that it does not see a financial pathway that includes the company funding extensive renovations at both Laurel and Pimlico.

And there’s the question of — if Pimlico survives at all — how much racing it should host. Though in recent years, it has played host to just a dozen days of live racing, as recently as 2015, 37 days of live racing were held at Old Hilltop.

This “lack of inclusiveness with regards to Pimlico” and its racing days, Del. Nick Mosby, a Baltimore City Democrat, told the Commission, “is a critical point.”

Beyond the longer term issue of Pimlico’s future, there’s also the question of the here-and-now. The facility’s disrepair became an issue during this year’s Preakness when a water main break occurred just days prior to the big race and caused severe water issues in the facility on Preakness day.

Ritvo said that what had happened was “totally unacceptable” and told the Commission that the company has earmarked $750,000 to ensure the problem does not recur.

“The experience was unacceptable and has to be fixed,” he said.

The company has come under recent fire for directing the lion’s share of its capital expenditures, including those matched by state-provided Racetrack Facility Renewal Account (RFRA) funds, to Laurel Park.

The Commission, likewise, has come under fire for approving those expenditures. But Algeo rejected those criticisms, saying that, since the Legislature had not specified any preferred split of funds, it would not be in the Commission’s authority to direct otherwise.

Originally, the Commission had been slated to consider a request for a RFRA reimbursement at today’s meeting, but that request was withdrawn when, Algeo said, Commission counsel Eric London realized that the company had not received approval for a current capital improvement plan.

Algeo pressed the company today to provide a plan that goes beyond the end of 2019, at least with regards to Pimlico, which he suggested would almost certainly be the location for the Preakness in 2020 and 2021.

“I understand we don’t know what’s happening with Pimlico long-range, although after today i’m praying that something good happens,” he said. “But… I want something on paper that you’re going to show us: I realize it’s an old facility, it’s gonna come with issues and problems, but I want to be able to say publicly to people that the Maryland Jockey Club is doing X, Y, and Z to ensure that that is a Triple Crown venue.”