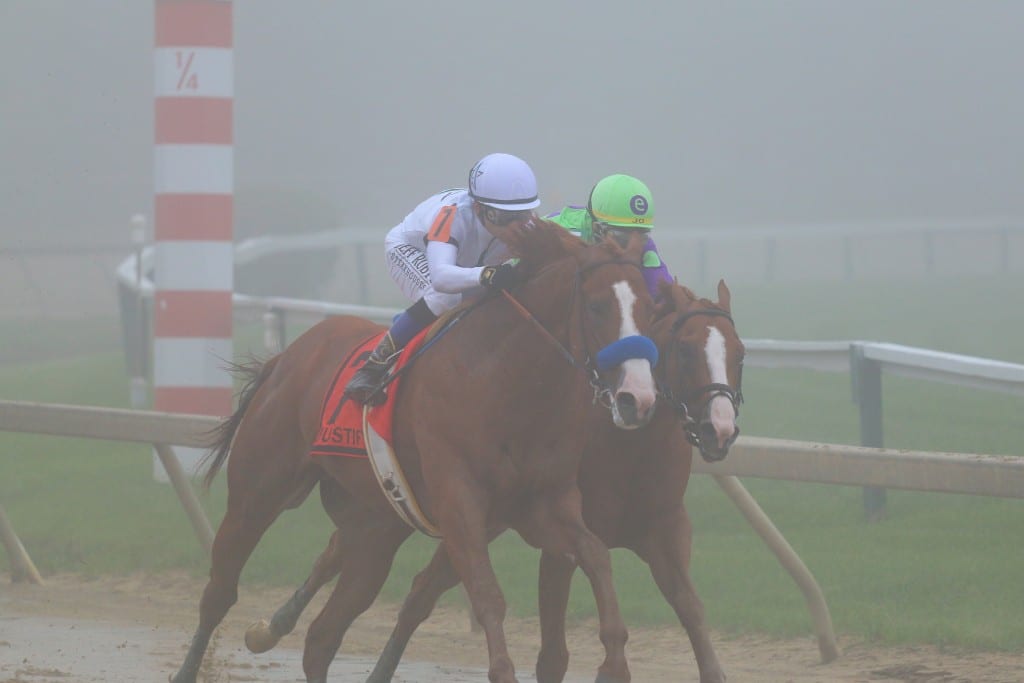 Pimlico’s future remains as foggy as ever. Photo by George Adams.

Legislation that would have sped the development of a so-called “super track” at Laurel Park and the re-opening of the Bowie Training Center — while also creating a way forward for the redevelopment of Pimlico Race Course — has died on the final day of the 2019 Maryland legislative session.

The bill, HB 643, seemed set to move through the state Senate Monday morning. But after the Baltimore City House delegation unanimously opposed the legislation, the Senate sent the bill back to its Budget and Taxation Committee. With the session set to expire at midnight, that seals the bill’s fate.

Legislation is moving quickly in the House, except a bill funding the racetracks is killed. Bill is sent back to committee. The Baltimore City House delegation voted against the bill. Miller said: "It's a good bill. They don't have the vision over in the House that we do."

The complex piece of legislation was amended into a much simpler — and noncontroversial — bill to allow the Maryland State Fair to access state Racetrack Facility Renewal Account (RFRA) funds to make improvements at the Timonium race course.

The provisions favored by The Stronach Group (TSG), owners of Laurel Park, Bowie, and Pimlico, would have allowed the Maryland Economic Development Corporation (MEDCO) to issue $120 million in bonds to support the Laurel and Bowie projects. Those bonds would have been repaid partially by TSG and partially by RFRA funds, which are funded by a portion of the revenue from slot machines.

The TSG-backed bills appeared to have died last week, but Sen. Bill Ferguson (D-Baltimore City) came up with what he hoped would be a solution: a complicated scheme that would have provided TSG the funding mechanism it sought while conditioning its use on the company’s working with the City of Baltimore to agree on — and implement — a redevlopment of the Pimlico property.

Ferguson’s provision would have given the City greater assurance that the Pimlico property would be redevloped in a timely manner. But it also, city officials feared, would have increased the likelihood that that redevelopment would have been as something other than a racetrack, taking with it the Preakness, which they have desribed as Baltimore’s “Super Bowl.”

The bill’s defeat leaves the status quo in place — a situation that TSG officials and others have said is increasingly untenable.

“The City has had over three years to propose a plan and funding source to redevelop Pimlico,” Bill Hecht, Chief Executive Officer and President of TSG’s Real Estate division, said in a statement. “Instead, the City has derailed constructive efforts at the state level to provide a funding source intended for the betterment of the entire Maryland racing industry in favor of an ill-advised lawsuit attempting to improperly take over our business enterprise. As we’ve said before, the status quo isn’t viable, and a lawsuit isn’t a strategy.”

Laurel "super track" bill is dead for this year after the Baltimore House delegation voted against it https://t.co/r0WSdWuct7

But kicking the can down the road is an increasingly troubling approach. The facility at Pimlico is in need of massive investment and is in poor enough condition that the City’s lawsuit, in which it seeks to take control of the Maryland Jockey Club of Baltimore City, alleges darkly that The Stronach Group might be purposely trying to “manufacture” a crisis to allow it to move the Preakness out of the aging facility. A December Maryland Stadium Authority study pegged the cost of a revitalized Pimlico at more than $420 million.

As a result of the defeat of HB 643, originally proposed by Del. Michelle Guyton (D-Baltimore County), the Timonium racecourse becomes collateral damage in the fight between Baltimore City legislators and The Stronach Group.

The Timonium-related provisions would have enabled the track to access a pro rata share of RFRA moneys based on the number of days it runs each year. That would have come to between $300,000 and $350,000 annually, which the Maryland State Fair and Agricultural Society, the nonprofit that runs the Fair, would have had to match as is also the case with the state’s other racetrack operators.

On a much smaller scale, the Timonium facility poses many of the same problems that Pimlico does: an aging grandstand in need of significant investment. Gerry Brewster, the Fair’s Chairman of the Board, called the defeat of the legislation “devastating.”

“We fulfill a critical role in the horse industry in Maryland,” he said.

While for the Big T, a return trip to the Legislature in 2020 could be a fruitful one, solutions for Pimlico — and thus for the future of the state’s Thoroughbred industry — remain elusive.