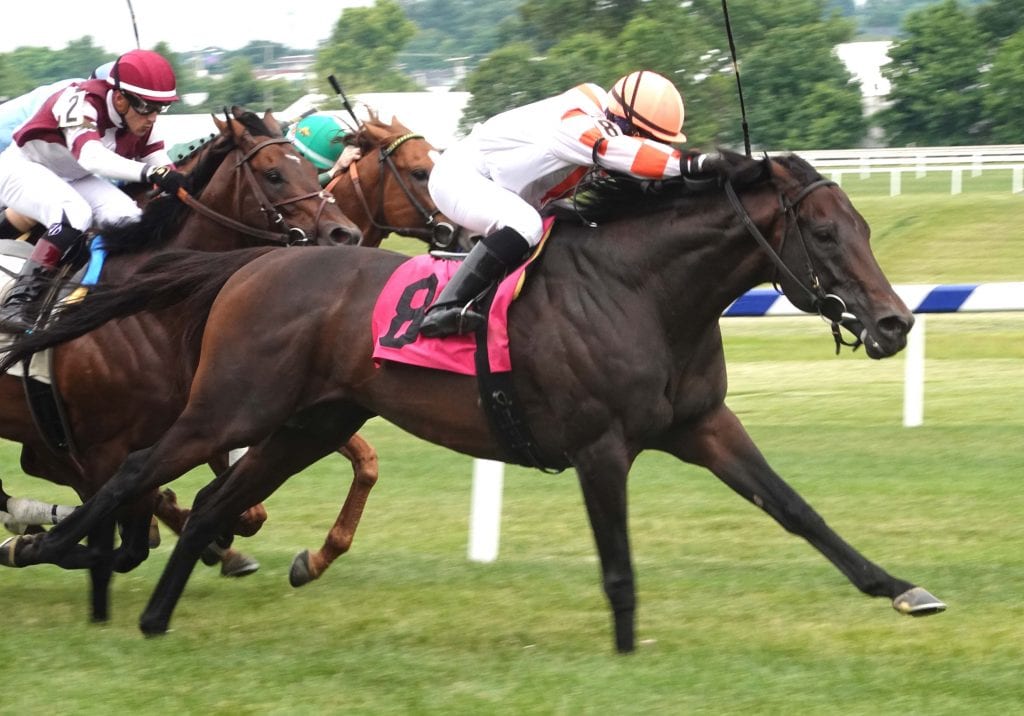 A pair of turf stakes — one for boys and one for girls — topped the Laurel Park Sunday card, and while one went to a horse with a demonstrated affinity for the Laurel grass, the other went to a runner making just her second North American start.

Larry Pratt and Dave Alden’s Doctor Mounty, trailing all but one horse at the top of the stretch, closed relentlessly on the far outside to pass a tightly bunched group led by favored Divisidero in deep stretch and come away with a one-length victory in Sunday’s $100,000 Prince George’s County Stakes at Laurel Park. The win gave Doctor Mount three wins and a second in four tries on the lawn at the central Maryland track.

The inaugural Prince George’s County for 3-year-olds and up over Laurel’s world-class turf course was the third of four stakes worth $400,000 in purses on a special nine-race Father’s Day program that kicked off the $1.1 million stakes schedule during Laurel’s 43-day summer meet.

In addition to live racing, Laurel played host to Cars, Cigars & Barbecue, one of the most unique Father’s Day celebrations in the Mid-Atlantic, offering families barbecue specials, cigar rolling, yard games and a car display featuring the Asphalt Angels and Lost in the 50s car clubs.

Ridden by Forest Boyce for Hall of Fame trainer Shug McGaughey, Doctor Mounty ($16.80) ran 1 1/16 miles in 1:40.30 over a firm Exceller turf course. Multiple Grade 1 winner Divisidero, racing for the first time since March 23, was a head better than Just Howard for second, with O Dionysus another head back in fourth.

It was the fifth win from eight career starts at Laurel for the New York-based Doctor Mounty and third in four tries over its turf course, including the 2018 Baltimore-Washington International Turf Cup (G3) last fall – the first of his two career graded-stakes triumphs.

Jockey Forest Boyce, McGaughey’s frequent go-to rider in Maryland, settled Doctor Mounty in fourth to the inside of Divisidero as Douglas Road, making his stakes debut, took the field through an opening quarter-mile in 24.64 seconds tracked by Just Howard, a Grade 3 winner and Maryland’s 2017 Horse of the Year. The top two held their spots following a half in 48.72 when O Dionysus, a stakes winner on dirt and turf, moved past Argentinean Group 1 winner The Great Day into third.

Just Howard and O Dionysus moved in tandem to challenge Douglas Road around the far turn as Divisidero began to launch his bid under Jevian Toledo, sweeping into contention four wide. Boyce followed Divisidero on Doctor Mounty, tipping outside in mid-stretch and setting the 5-year-old son of Street Sense down for a drive to the wire.

“I thought I maybe gave him a little too much to do at the three-eighths pole, but then he really started picking it up. I thought at the quarter pole we had a shot to get there, so it was good,” Boyce said.

“Shug had him ready today,” she added. “He did everything perfect. He felt really good. I knew I had a good shot going into the turn and then I got a little worried that [Divisidero] was getting away from us, but he really kicked it in.”

Doctor Mounty moved to within $80 of $500,000 in career purse earnings with the victory, his eighth from 29 starts. It was his second in seven tries following the BWI Turf Cup, the other coming in the Tropical Turf (G3) Jan. 12 at Gulfstream Park in his seasonal debut.

One race later, the Irish-bred I’m So Fancy powered to a 2 3/4-length win in the Big Dreyfus for fillies and mares three and up. I’m So Fancy completed the 1 1/16 miles on firm turf in 1:40.34 — a time practically identical to Doctor Mounty’s. She is owned by Lael Stable.

Given an ideal ride from Trevor McCarthy, his second of three wins on the afternoon, I’m So Fancy ($6.40) hit the wire in 1:40.34 over a firm All Along turf course for her first North American triumph. She was fourth, beaten 3 ½ lengths by front-running Mitchell Road, in the Stella Artois Gallorette (G3) May 18 at Pimlico Race Course on the undercard of the 144th Preakness Stakes (G1).

“She was much better today than she was Preakness day. She was a little bit nervous that day. Today she really had all of her composure, she was nice, and it all worked out,” trainer Arnaud Delacour said. “I just felt that in the first race we learned a lot about her running style and what to do or not to do, and today we just tried to adjust a little bit.”

Theodora B. came with a late run to edge Dark Artist by a head for second. They were followed by Malakeh, Grade 3 winner Andina Del Sur, Pugilist, Quick Witted, Good Roll, Hogans Holiday, Enchanted Ghost, Shimmering Aspen and So Innocent. Lift Up was scratched.