Please Flatter Me gets back on track with Alma North win 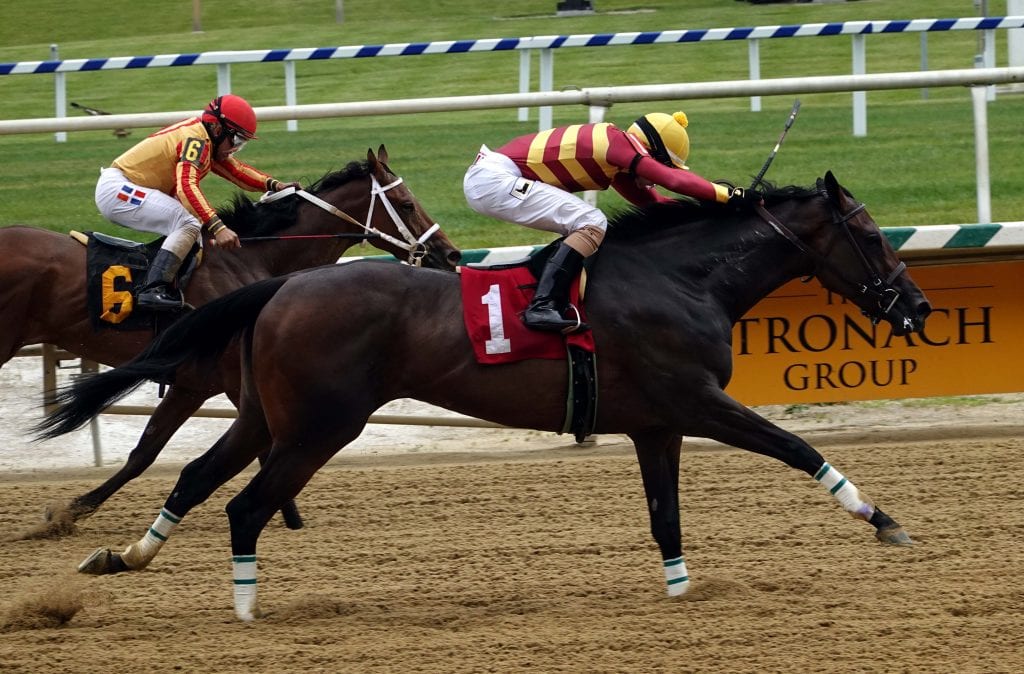 Please Flatter Me held off Parisian Diva to win the Alma North Stakes at Laurel Park. Photo by Laurie Asseo.

Heider Family Stables, Madaket Stables and Doheny Racing Stable’s Please Flatter Me got back on the winning track Sunday at Laurel Park, dueling Never Enough Time into submission and holding off Parisian Diva late in the $100,000 Alma North Stakes.

Second behind Covfefe’s track record-setting performance in the Adena Springs Miss Preakness (G3) May 17 at Pimlico Race Course, Please Flatter Me ($2.80) completed the distance in 1:22.44 over a fast main track for her third career stakes win and second at Laurel following the Dec. 29 Gin Talking, her most recent victory.

“She’s an awful nice filly. She gives you everything she has, every trip over,” winning trainer Mark Reid said. “I went in today with a lot of confidence.”

Breaking from the rail as the 2-5 favorite in a field of seven, Please Flatter Me surged to the front under regular rider Alex Cintron and was quickly met to her outside by Never Enough Time, the two leaders sizzling through a quarter-mile in 22.55 seconds and a half in 44.67. Please Flatter Me was able to shake off Never Enough Time once straightened for home, and had enough left to outrun Parisian Diva to the wire by three-quarters of a length.

“We were going to see how she started and whether we were going to go to the lead or were we going to stay, but with the one-hole I didn’t have too many options. She got there and she was so comfortable,” Cintron said. “Even going so fast, she was doing it so easy. I feel so confident on her because she always tries hard, so I just left her there and she gave me a nice kick at the end. In the middle of the lane she got to looking at something in the infield a little bit and slowed down, but as soon as she felt that horse coming she kept going again.”

“We’ll have to talk it oved with the owners but we’re leaning toward probably a trip toward Saratoga,” Reid said of a next start.

The Grade 1 Test at seven furlongs on August 2 is the first dirt sprint for sophomore fillies at the Spa.

One race after Please Flatter Me’s win, Cordmaker dawdled some 10 lengths off a fast early pace before running past all of his rivals to win the $100,000 Polynesian Stakes for three-year-olds and up. He covered the seven furlongs in 1:21.37.

“All year long, since his first work, I saw a different horse than he was as a 3-year-old,” trainer Rodney Jenkins said. “We’re really proud of him.”

Cordmaker is a gelded 4-year-old son of two-time Horse of the Year and 2014 Hall of Famer Curlin that has earned all six of his wins at Laurel. He came within a half-length of graded-stakes success in the historic Pimlico Special, beaten by Tenfold and You’re to Blame.

“I wish he’d have gotten a little quicker run to the stretch. He was wide and he was flying, but that’s him,” Jenkins said of the Special. “That’s the way he’s going to run. You’re not going to rush him to the front. If you do, you don’t have horse.”