Patience a virtue for Moon Colony in G2 Penn Mile 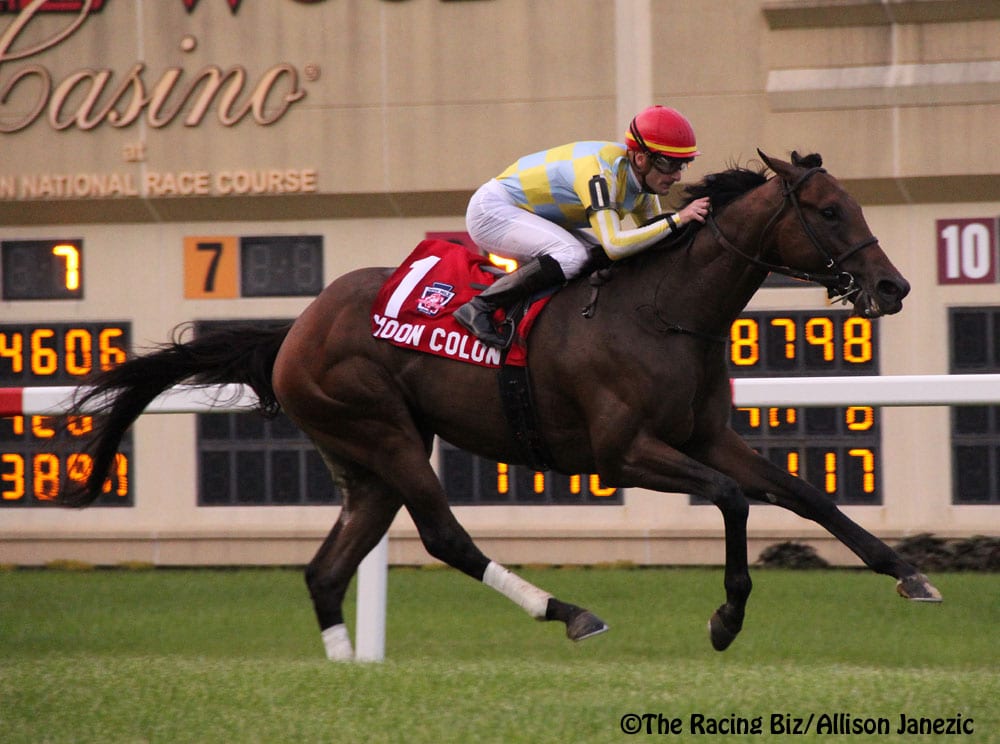 Moon Colony and Julien Leparoux slipped through inside and proved best in the Grade 2 Penn Mile. Photo by Allison Janezic.

For a sport that’s all about speed, horse racing most often rewards patience: patience in trainers and owners who take their time and allow horses to mature. Patience in jockeys who bide their time and seize opportunities when they arise.

Both kinds of patience were on display this evening at Penn National when Moon Colony rallied from sixth to score a 9-1 upset in the $500,000, Grade 2 Penn Mile, the track’s signature event each year.

It was the first stakes win for Moon Colony and his third victory overall, from seven career starts. The winner’s share pushed his career earnings past the $370,000 mark.

It was also Moon Colony’s first start in nearly five months, since a close-up fifth-place finish in the $100,000 Kitten’s Joy Stakes at Gulfstream Park January 5..

“He wasn’t very heavy and lightened up after the Kitten’s Joy, and I brought him to our training center in Ocala, and he’s come back and trained extremely well,” winning trainer Mark Casse said prior to the Penn Mile.

He arrived at Belmont Park earlier in May, and Casse’s assistant, Jamie Begg, has liked what he’d seen from the sophomore son of Uncle Mo.

“He’s been breezing lights out at Belmont,” Begg said in the winner’s circle after the Penn Mile. “It made us feel like he was on his game.”

Moon Colony breezed five furlongs from the gate in a minute flat on May 15 and followed that up with a four-furlong move in 46 ⅖ seconds on May 24, both works the fastest of the day at that distance.

Though Moon Colony’s earlier races had seemed to portray him as a rallying sort, Begg fretted that his speedy breezes presaged an involuntary change in tactics.

“I kind of told julien, I said, ‘Let him do what he wants to do, but the way he’s been training, he may drag you out of there,’” Begg recalled.

In the event, though, that’s not what happened. Real News, with Ty Kennedy up, and favored A Thread of Blue (Luis Saez) shot to the early advantage. That pair zipped the opening quarter-mile in a sharp 22.71 seconds over yielding ground.

That left Moon Colony, with Julien Leparoux in the irons, in sixth and four lengths off the lead.

“When he dropped back and they went kind of quick, I was pretty happy, and he was still sitting in the bridle,” Begg said.

A Thread of Blue began to tire on the turn for home, while Real News was still going strong. But Moon Colony began to inch closer, and in the stretch, the rail opened up, enabling Leparoux, who broke from the inside, to ride the rail all the way home.

“The one-hole ended up being perfect — saved ground all the way around,” Leparoux said. “That was a good pace for us, and he was traveling really good. Everything on the rail just opened up for me, got through there and finished up nicely.”

His winning margin was 1 ¼ lengths, and he completed the mile over yielding ground in 1:37.45. Casa Creed was second, and Real News held third. The favorite, A Thread of Blue, was a well-beaten fourth.

Begg was not sure what might be next for Moon Colony, but one logical spot might be the $1 million, 1 ¼ mile Belmont Derby on July 6.

The $200,000 Penn Oaks, also at a mile, went to heavy favorite Regal Glory (1-9). The Chad Brown trainee got the mile over yielding turf in 1:39.42 to win by almost three under Luis Saez…  Favorites ruled the day in two other MATCH Series races, as well. Saez struck again aboard Dynatail (1-2) in the 1 1/16 mile, grassy Susquehanna Stakes for fillies and mares for her second win at Penn National. She’s trained by Michael Dini for Ballybrit Stable LLC… In the five-furlong Pennsylvania Governor’s Cup, which after one scratch had just four runners, 7-10 Pure Sensation got the jump on his rivals and and held on to win by a neck over second choice Completed Pass. He was ridden by Kendrick Carmouche for trainer Christophe Clement… Handle on the 12-race program was $3,685,653, the track announced, the second-highest in its history.