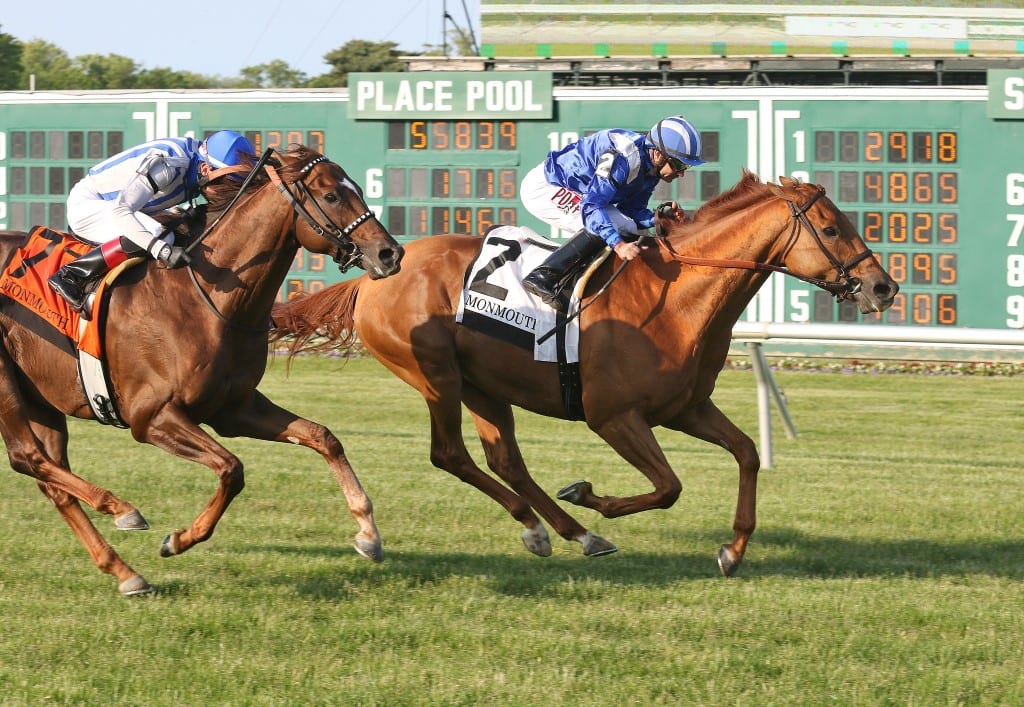 Almanaar and Joe Bravo held off the late bid of favored Synchrony to win the G2 Monmouth Stakes. Photo by Ryan Denver/EQUI-PHOTO.

Fittingly enough, the first two graded stakes of the 2019 season at Monmouth Park had plenty of Jersey about them Saturday. The Grade 3 Salvator Mile went to the redoubtable Jersey-bred veteran Sunny Ridge, while the Grade 2 Monmouth Stakes, on the turf, was won by Almanaar, whose pilot was Monmouth legend Jersey Joe Bravo.

Trainer Chad Brown’s hopes for a repeat in the Grade 1 United Nations on June 22 at Monmouth Park will apparently fall to the brawny shoulders of Almanaar.

The muscular 7-year-old gelding shook off the rust from a five-month layoff to score a neck victory over Synchrony in the Grade 2 Monmouth Stakes before a crowd of 17,309 on Saturday, with Luis Cabrera, Brown’s assistant, saying the United Nations is the next target for Almanaar.

Ridden by Joe Bravo, Almanaar made an explosive move on the backside to rush from seventh place to second, then held sway over a late-charging Synchrony and jockey Trevor McCarthy in the stretch after assuming command in the mile and an eighth grass race.

Owned by Shadwell Stable, Almanaar returned $6.80 to win. He covered the nine furlongs over a turf course listed as “firm” in 1:45.75.

“He has been training very well at Belmont, so even though he has been off we expected him to run well,” said Cabrera, who oversees Brown’s stable at Monmouth Park. “Chad liked this horse a lot in this spot. He’s a runner, a real classy horse.”

Brown won the United Nations a year ago with Funtastic. He also captured the race in 2015 and 2013 with Big Blue Kitten.

Almanaar and Bravo survived a claim of foul from McCarthy, with the objection dismissed by the stewards.

“He’s such a big strong horse – he’s a beast, really,” said Bravo. “I didn’t want to make that big middle move but he was fresh and wanted to do it and he’s so strong I didn’t want to get into a tug of war with him.

“If you saw him in the post parade he was ready to run. I thought if I tried to fight him down the backside when he made that move I was just going to take more energy out of him. I was trying not to fight with him.”

Bravo acknowledged that his horse did “drift a little in the stretch” but said that “it wasn’t anything major.”

“By the time (Synchrony) got up to us he had straightened himself out,” he said.

It was another 4¼ lengths back to Force the Pass in third.

The graded stakes victory was the second for Almanaar since Brown took over the training responsibilities for him in 2016. The son of Dubawi-Baqah by Bahhare also won the Grade 1 Gulfstream Park Turf Handicap in 2017.

Shortly after he was honored as the New Jersey Thoroughbred of the Year for 2018, Sunny Ridge started his campaign to repeat those honors in 2019.

The Jason Servis-trained gelding found room along the rail to rally past Diamond King in deep stretch for a three-quarters length victory in Saturday’s Grade 3 Salvator Mile at Monmouth Park. It was another 2¼ lengths to Bal Harbour, who rallied impressively after missing the break.

Owned by Dennis Drazin, the CEO and chairman of Darby Development LLC, operators of Monmouth Park, Sunny Ridge received a well-timed ride from Jose Lezcano in posting his seventh victory from 25 career starts.

With the $90,000 winner’s share from the purse of $150,000 the 6-year-old son of Holy Bull-Lignum Vitae by Songandaprayer pushed his career earnings total past $1.3 million.

“He had a great trip. He broke super,” said Servis. “I was glad Jose Lezcano kind of let him float. Once he made his move he really took off.

“He’s a poor man’s horse. He bangs away every race and makes money. I’ve never even thought about him as Jersey-bred. When I got him as a 2-year-old I told Dennis I am going to make $1 million with this horse. Look at him. He’s a big, beautiful horse. And he’s a gelding so he could have another good three years in him. He might hit $2.5 million. I’m thrilled to death with his performance.”

The combination of Joe Bravo and Chad Brown, meanwhile, accounted for two of the four stakes victories. In addition to winning the featured Grade 2 Monmouth Stakes with Almanaar, the two combined to take the Boiling Springs Stakes with favorite Beautiful Lover.

The $75,000 John J. Reilly Handicap for Jersey-breds produced the only major stakes upset, with Prendimi scoring in wire to wire fashion and paying $54.40 to win.

Chris DeCarlo rode the winner, who was trained by Luis Carvajal.