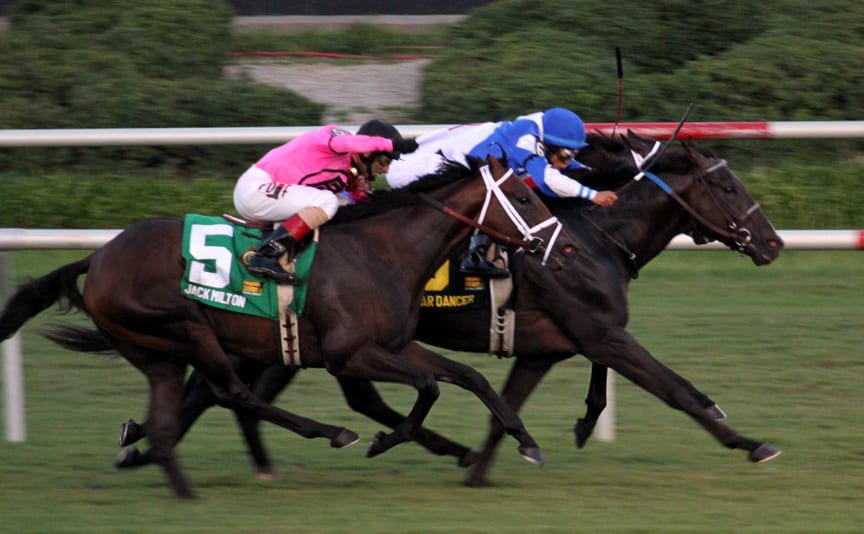 Led by the $250,000 Virginia Derby (G3), Colonial Downs today announced its 2019 stakes schedule for the 15-day race meeting, August 8 – September 7, which will include $1.8 million in stakes purses as flat racing returns to Virginia for the first time since 2013.

Through the investment of the Colonial Downs Group, Colonial Downs has been reestablished for the 2019 season. Located between Richmond and Williamsburg, Colonial Downs will offer daily purses averaging a minimum of $500,000, which will comprise an approximate $7.5 million in total purses allocated for the meeting.

With the Barn Area reopening on July 25, Colonial Downs also announced that the condition book and stall application are now available at www.colonialdowns.com.

“As a native Virginian, it is exciting to be part of a strong team effort bringing racing back to Colonial Downs,” said Jill Byrne, Colonial Downs Vice President of Racing Operations. “We are dedicated to the horse racing industry and making a positive impact in all aspects of it. We’ve received so much interest and support from horsemen, patrons, media and industry leaders and look forward to providing a fantastic racing experience for everyone.”

“We are excited to welcome back horsemen to race at Colonial Downs with a highly competitive daily purse structure and comprehensive stakes schedule,” said Colonial Downs Racing Secretary Allison De Luca. “We offer a strong turf racing program with the widest grass course in the country that holds up extremely well to all weather conditions along with our 1 ¼ mile main track allowing us to provide a broad base of race options.”

The first Saturday of the meet, August 10, will feature four stakes races on the turf course for Virginia-bred horses, with each race carrying a $100,000 purse. Those races are: the M. Tyson Gilpin for fillies and mares at 5 ½ furlongs; the Meadow Stable, also at 5 ½ furlongs; the Nellie Mae Cox for fillies and mares at one mile and the Edward P. Evans at one mile on the turf.

“Virginia’s horsemen can’t wait to start racing again at Colonial Downs after a five-year shutdown,” said Frank Petramalo, Executive Director of the Virginia Horsemen’s Benevolent and Protective Association (VHBPA). “New track management is great, the purses will be among the highest in the Mid-Atlantic, and Colonial’s racing surfaces, especially its huge turf course, are world class.”

“As a trainer who has had some very good days at Colonial Downs, I am very happy for horsemen, the new management and racing fans in Virginia that the track will be opening again this summer, especially at a facility that has one of the best turf courses anywhere in the country,” said Romans, who won the Virginia Derby with Kitten’s Joy (2004), Paddy O’Prado (2010) and Silver Max (2012).

The $50,000 Randolph D. Rouse Steeplechase for fillies and mares will be run at 2 ¼ miles over national fences.