Horses to watch at Fasig-Tipton Midlantic 2yo sale 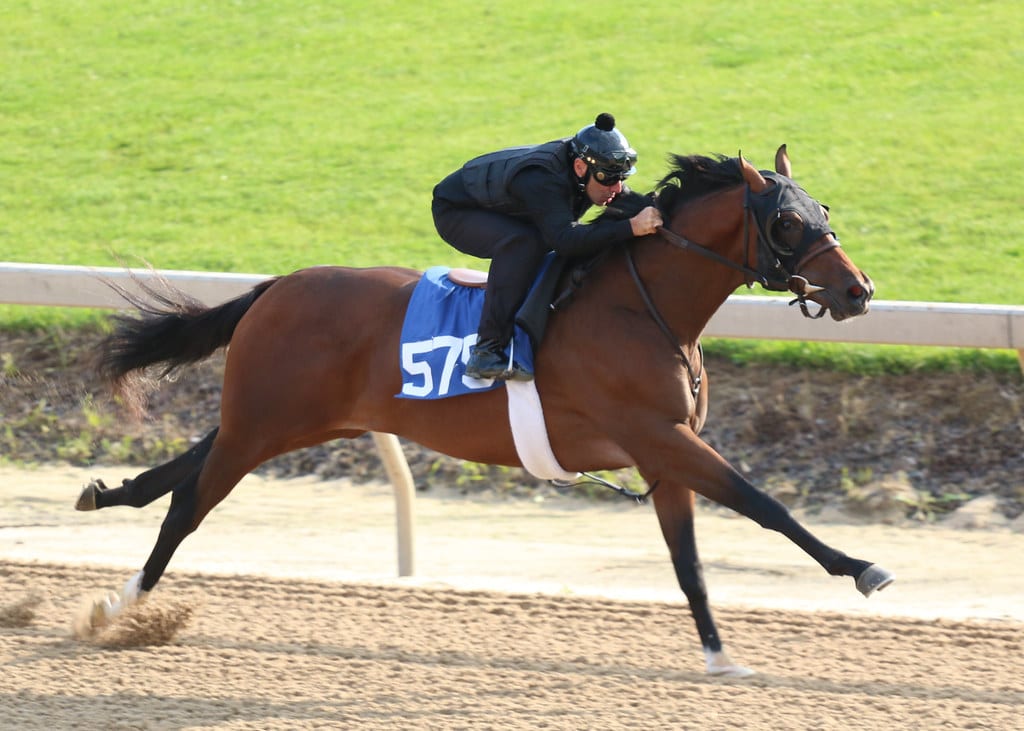 Hip 575 is by Tapit and is a half-brother to Grade 1 Preakness winner War of Will. Photo by George Adams.

With 600 hips on offer (before outs), including some by the nation’s top sires, the Fasig-Tipton Midlantic 2-year-olds in training sale, which begins Monday in TImonium, promises to offer some fireworks. Here, we offer some hips to watch:

Hip 90 — By the champion and leading young sire Uncle Mo, who got champion and Kentucky Derby winner Nyquist in his first crop, this Virginia-bred filly is out of the Unbridled’s Song mare Claire’s Song and offered by Top Line Sales LLC as a pinhook after selling at Fasig-Tipton’s Kentucky October sale last fall for $160,000. She breezed a furlong in :10 2/5 last Tuesday during the first breeze show day, when the consensus is that the track was heavier and slower than the other two days. A March foal, she demonstrated a huge, ground-eating stride in her work, and galloped out with plenty of energy. She’s a half-sister to the stakes-placed winner Elusive Mischief, and her full-sister, now known as Tan and Tight, brought $250,000 at this sale a year ago from top bloodstock agent Mike Ryan.

Hip 118 — This Pennsylvania-bred filly is by that state’s successful stalwart Weigelia, out of the unraced Dixie Union mare Dixiewood. A product of Chip and Barbara Wheeler’s WynOaks Farm, who stands Weigelia, she sold here at Timonium last fall for $23,000 — a solid return off her sire’s advertised fee of $3,500 — and returned to breeze a furlong over the heavier surface on Tuesday in the day’s co-bullet :10 1/5 for Grassroots Training & Sales LLC. She really leveled off nicely during her work and had a big gallop-out, as well. A full-sister to a winner, this filly is already named Our Dixie Blue because of her distinctive blue right eye, and looks poised to provide a nice return to her pinhooking connections thanks to that impressive breeze.

Hip 206 — Part of the Mckathan Bros. consignment, this flashy gray Speightstown colt is another Pennsylvania-bred, and another pinhook prospect from Fasig’s Kentucky October yearling sale, where he brought $150,000 from the Zayats of American Pharoah fame. A half-brother to the stakes winner She’s a Big Winner (herself an $80,000 graduate of this sale in 2014) and out of a mare by Ghostzapper — a rising star in the broodmare sire ranks — this close-coupled and quick-looking colt breezed an eighth of a mile on Wednesday in :10 3/5, with a strong gallop-out.

Hip 263 — Stallions don’t rise as high as quickly as Into Mischief has very often, and the Spendthrift Farm resident has a $376,076 two-year-old in-training average price this year to go along with his $150,000 stud fee. This Maryland-bred colt, already named Sagamore Mischief, was a bargain buy at $90,000 in Ocala last October, but following a solid :10 3/5 breeze here last week, and on the heels of his sire’s successful weekend down I-83 at Pimlico where his daughter Covfefe set a new track record in the Grade 3 Miss Preakness Stakes at Pimlico, this well-made, masculine colt looks poised to bring plenty more than that on Monday for his consignor, Scanlon Training & Sales. A half-brother to Grade 2-winning two-year-old Bern Identity, out of the very quick Grade 3 winner Maddalena, this guy’s catalog page also includes the local standout Foxie G.

Hip 458 — There were two first-crop Maryland stallions whose yearlings sold very well last fall at Timonium, and this Imagining filly brought $50,000 at that sale to help boost her sire’s average. Despite his own later-maturing record, Imagining has already had three of his first juveniles reach the races this year, with a second and a third to his credit so far, and this filly looked plenty quick enough when breezing a furlong in a smooth :10 3/5 with a big gallop-out on Thursday. A lovely physical specimen, it’s easy to see why she brought what she did last fall despite a lack of stakes performers under her first two dams, and her pedigree also features some intriguing inbreeding to the Blue Hen mare Dance Number, since this Maryland-bred filly is out of a daughter of longtime local leading sire Not For Love. A half-sister to the winner The Berber — who brought $40,000 at this sale two years ago — hip 458 is offered by White Pine Thoroughbreds.

Hip 506 — The other young Maryland sire who had an excellent sale last fall at Timonium was Golden Lad, and this colt brought $34,000 that day. Consigned back here by C & C Stables LLC, this Maryland-bred breezed a quarter-mile on Thursday in a sharp :22 flat with a fast gallop-out — a drill which was notable for his audible squeal at the wire when the rider tapped him with the crop to encourage him to continue on. This is the very successful Sycamore Hall female family of Who Did It and Run (dam of two stakes winners, and second dam of two more), and this imposing, monster of a colt is a half-brother to the $310,000 two-year-old in-training buy from last year, Introduced — who is now a stakes-placed winner.

Hip 575 — He wasn’t bred in the region, but this Tapit colt added some local flair to his page over the weekend when his half-brother War of Will won the classic Preakness Stakes after his troubled trip in the Kentucky Derby two weeks ago. Consigned by Wavertree Stables, he’s also a half-brother to Group 1-winning two-year-old Pathfork and to a stakes winner by A.P. Indy, while his stakes-winning Sadler’s Wells dam is a half to the Breeders’ Cup Mile winner Spinning World. This Kentucky-bred colt sold for $130,000 as a yearling, and after a :10 3/5 breeze during which he finished strongly and then galloped out well, he figures to light up the board late thanks in large part to his brother’s recent exploits.