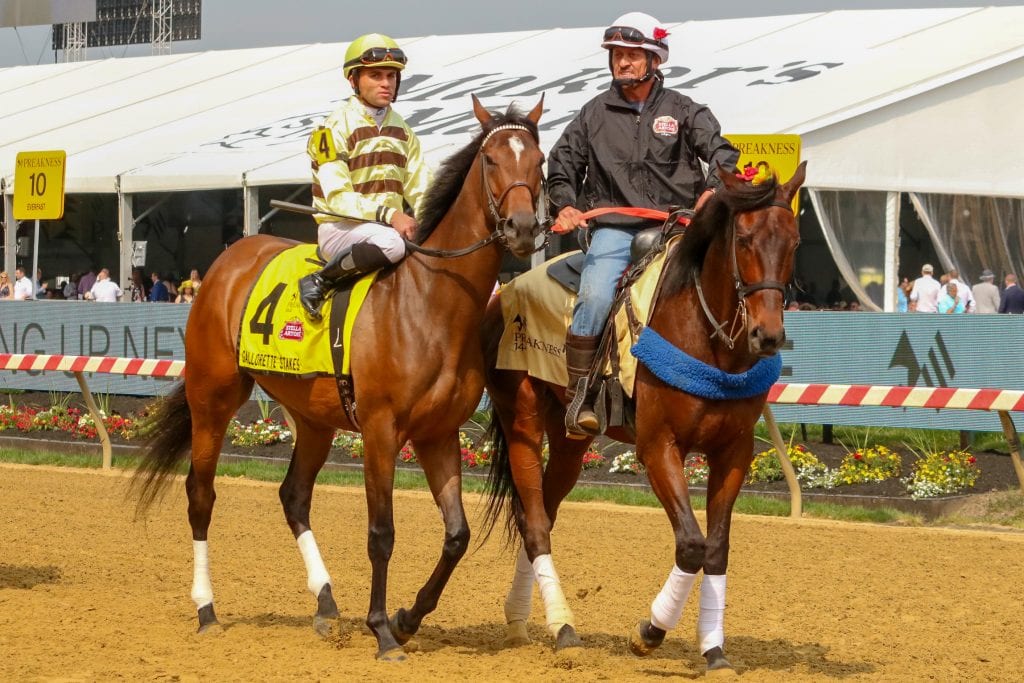 The lightly-raced, four-year-old Mitchell Road had shown nothing but promise — and speed — in her first six starts, posting four wins and two runner-up efforts.

And today, in the grassy Grade 3 Gallorette Stakes for older fillies and mares at Pimlico Race Course, the daughter of English Channel added “graded stakes winner” to her resume with a front-running, 2 1/4-length victory.

Mitchell Road was a tough-luck second in her debut and second again, behind next-out stakes winner Camila Princess, in her third start. But she’s now run off four consecutive wins and last out won her first stake, taking the Albert M. Stall Memorial Stakes at the Fair Grounds.

“She got a little bit sick after her race at the Fair Grounds and needed a little time to recuperate, which is why you’re only seeing her now at Pimlico,” Mott explained.

It was, it’s safe to say, worth the wait.

Under jockey Joel Rosario, Mitchell Road zoomed to her accustomed spot on the early lead, and though the fractions weren’t especially slow — 23.28 seconds for the opening quarter, 47.07 for the half — Mitchell Road was able to do it easily with only token pressure from Dynatail in second.

“She broke away in the lead and was just looking around, enjoying what she was doing,” Rosario said. “She is a good-moving filly, and I’m glad I had the opportunity to ride her. She was comfortable.”

After cruising six furlongs in 1:10.59 in possession of a two-length advantage, Mitchell Road was able to come home in a solid 30.62 seconds for the final five-sixteenths, stopping the clock in 1:41.21 for 1 1/16 miles over firm turf. That left her rivals scrambling for the minor shares.

Mitchell Road, off as the favorite, returned $6.20 for a two-dollar win wager and topped a one-dollar exacta worth $23.50. It was a solid group, one which included Grade 3 winner Thewayiam, as well as Irish Group 3 winner I’m So Fancy and French Group 3 winner Barkaa. That’s a perhaps long-winded way of saying that Mitchell Road’s victory suggests she has the talent to make some noise in the distaff turf division, a proposition which Mott endorsed.

“There’s a big race at Belmont going one turn on Belmont day, which I would say would suit her style, but obviously we have to see how she comes out of this and talk to the ownership,” Mott said, alluding to the Grade 1 Just a Game Stakes.

Just two weeks ago, Mitchell Road’s pedigree received a big boost when her little half-brother by Lookin At Lucky, Country House, was elevated to victory in the Kentucky Derby. Today, in a cleaner albeit far more modest way, Mitchell Road returned the favor.

“We’ll enjoy this,” Mott said. “She gave her little brother a big update there.”