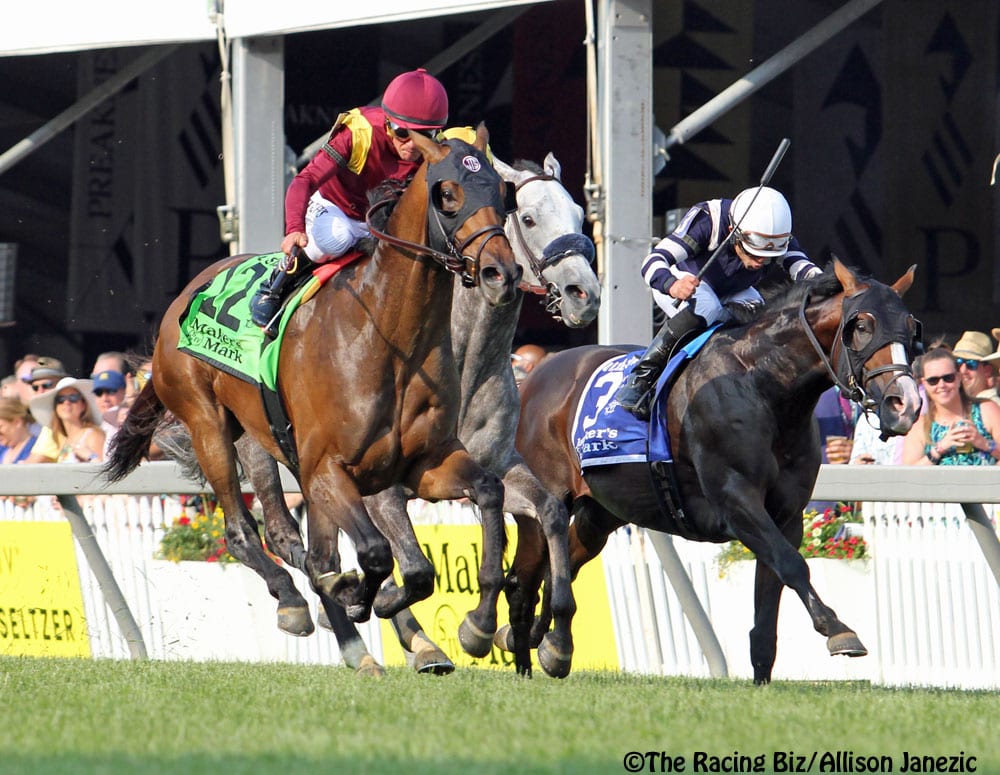 Catholic Boy prevailed over the late run of Admission Office (#3) to win the G2 Dixie at Pimlico. Photo by Allison Janezic.

In making his 2019 debut after a six-month layoff, Catholic Boy demonstrated his versatility by winning the 118th running of the $250,000, Grade 2 Dixie Stakes on the Pimlico turf in the race run just prior to the Preakness.

It was Catholic Boy’s fourth graded stakes win on the grass. He also has a pair of graded victories on the main track.

Javier Castellano, who won five races on Black-Eyed Susan day, guided the favored Catholic Boy (7-5) from the outside post in the ten-horse field. Castellano hustled Catholic Boy out of the gate and sensed that that he could go lead but chose to stalk, allowing Real Story with John Velazquez to set a measured pace in the 1 1/16-mile test over firm turf.

Real Story led through the first three markers in 23.46, 47.71 and 1:11.25, while Catholic Boy lingered a length or two and to the outside. When they hit the 3/16ths pole, Catholic Boy had taken the lead, went clear in mid-stretch, and found enough to hold off the closing efforts of Admission Office, who finished second, and Just Howard, who was third. The final time of the Dixie was 1:41.09.

“I didn’t feel anything. He’s a good horse. When I asked him, he responded so well,” said Castellano of the horses closing ranks. “He was great. He’s a super horse. You can do whatever you want. He can be on the pace, he can come from behind. I like the way he did it. Coming off a layoff since the Breeder’s Cup, that’s a long time to put in a good race like he did today. It was a great performance. We’ve been working together with Jonathan Thomas, and he did an excellent job with the horse to bring him to perform the way he did.”

For trainer Jonathan Thomas, native to Virginia, the win felt close to home.

“Maryland’s our neighbor, so it’s kind of nice coming down here and having a horse like this,” said Thomas after the race. “I used to gallop horses for Jimmy Murphy, so I got a little history here in Maryland. To win a race like this here, it’s really meaningful. We’re never successful without these guys. The horses are the most important part; we’re lucky to have him.”

Catholic Boy is by More Than Ready out of the Bernardini mare Song of Bernadette. He is owned by Robert LaPenta, Madaket Stables, LLC, Siena Farm, and Twin Creeks Racing Stables and was bred in Kentucky by Fred W. Hertich and John Fielding. In his 11 starts he now has seven wins and earnings just shy of $2 million. Thomas said he may set his sights in the Suburban July 6..