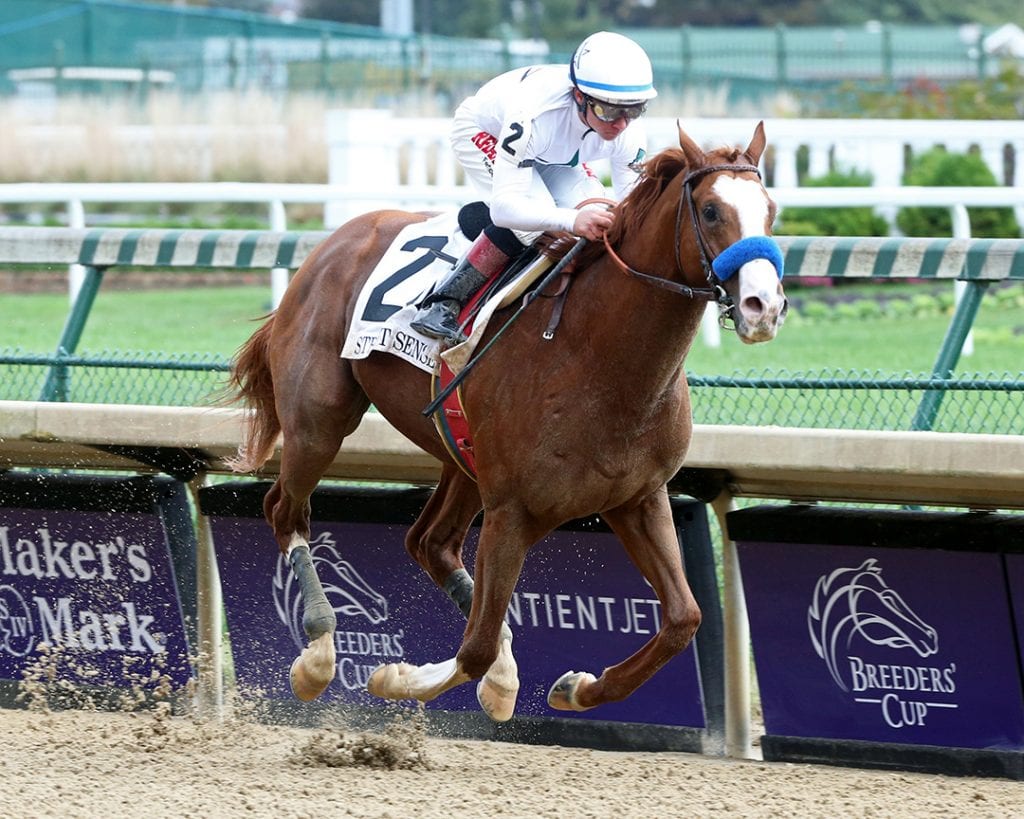 In the absence of Maximum Security, Country House and Code of Honor, beaten Kentucky Derby (G1) favorite Improbable is expected to vie for favoritism in the 144th Preakness Stakes (G1) at Pimlico Race Course May 18.

Hall of Fame trainer Bob Baffert will try for his record-breaking eighth victory in the historic Preakness with Improbable, who finished fifth and was placed fourth in the Derby last Saturday as the 4-1 favorite in the 19-horse field.

Baffert was non-committal about a Preakness runner Sunday but confirmed Monday that Improbable would be pointed to the Middle Jewel of the Triple Crown. Improbable finished 3¼ lengths behind Derby first-place finisher Maximum Security, whose owners Monday ruled out a start in the Preakness for the colt who was disqualified and placed 17th.

“With Maximum Security not in there, that’s why we’re running,” Baffert said Tuesday morning.

However, Improbable earned a Preakness chance with his solid Derby effort.

“I think he ran very well,” Baffert said. “They were all stuck there together, all bunched up. When he finally got loose he made a little run.”

Improbable, a son of City Zip, came very close to hitting the board in the Derby. He was a head behind fourth-place finisher Tacitus, who was three-quarters of a length in back of third-place finisher Code of Honor.

Country House, who finished second and was placed first in the Derby, was expected to move on to Baltimore and compete in the Preakness, but Hall of Fame trainer Bill Mott said Tuesday morning he would not make the race. He is the first Derby winner to miss the Preakness since 1996, when Grindstone was found to have a knee injury and was retired. Hall of Fame trainer Shug McGaughey said Tuesday that Code of Honor would pass on the Preakness and may make his next start in the Dwyer (G3) in July at Belmont Park.

Improbable, whose co-owners WinStar Farm, China Horse Club and Starlight Racing were principals in Baffert-trained 2018 Triple Crown winner Justify, remains at Churchill Downs. Baffert will fly to Louisville from California this weekend and watch the colt on the track before finalizing his plans for the Preakness. He said Tuesday that he was unsure whether Improbable will have a timed work between the Derby and the Preakness.

Baffert said that his other two Derby runners, Game Winner (5th) and Roadster (15th) were not candidates for the Preakness. He said Game Winner will be checked at the Rood & Riddle Equine Hospital in Lexington, Ky. for tightness in his rear end.

Baffert is a fixture at Pimlico on the third Saturday in May and his victory with Justify equaled the record set in the 19th century by Robert Wyndham Walden.