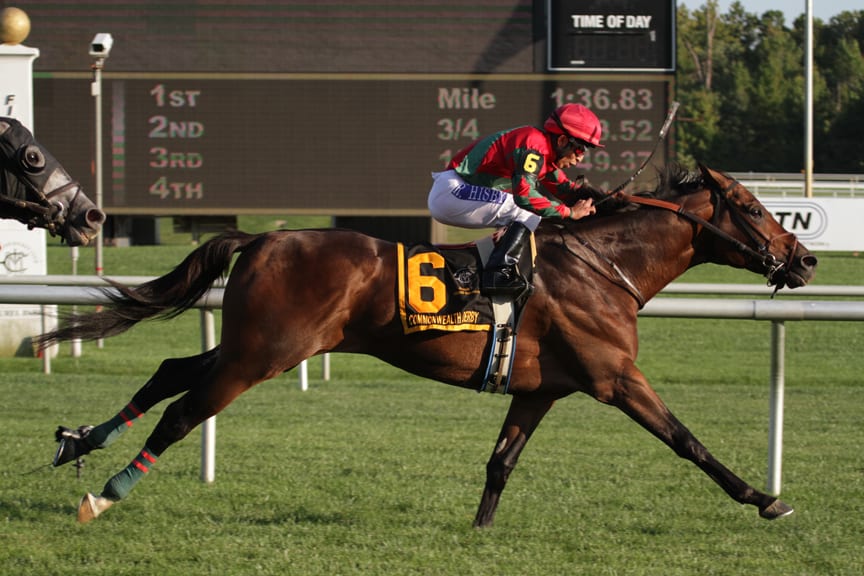 One Go All Go won the 2015 Commonwealth Derby at Laurel Park. Photo by Laurie Asseo.

One Go All Go will receive Horse of the Year honors on Friday May 3rd at the Virginia Thoroughbred Association’s annual awards reception at the trackside Turf Club tent at Great Meadow in The Plains. The event will take place on the eve of the Virginia Gold Cup races.

One Go All Go, with a win, a trio of runner-up finishes and a third in 2018, has also been named Champion Turf Horse. The 7 year old Fairbanks horse was bred by Albert Coppola and is out of the Marquetry mare, See Ashleigh Run. 2018 was his most lucrative year thus far with $363,550 in earnings. He won the Grade 2 Dixiana Elkhorn Stakes at Keeneland last spring and had three seconds in Grade 2 events — the Fort Lauderdale, Mac Diarmida and Pan American Stakes, all at Gulfstream. One Go All Go has bankrolled $718,538 overall from 27 starts.

Elusive Mischief will be named Champion Three Year Old Male and Altamura will receive Top Sophomore Filly honors. The former was bred by Jim Fitzgerald and Katie Fitzgerald and earned $122,225 from three wins last year. The Into Mischief colt kicked off 2018 with a maiden special weight win at Fair Grounds and followed that with victories in an allowance optional claimer at Woodbine and in the Punch Line Stakes at Laurel last September. The latter was bred by the Chance Farm and is by Artie Schiller out of Delta Weekend by Jump Start. She was a solid four for six last year, connecting in a maiden special weight at Laurel and then in three Virginia-bred stakes — the Tyson Gilpin, Camptown and Oakley. Altamura, who did not race as a two-year-old, earned $157,400.

Millionaire Virginia-bred Long On Value will be named Champion Sprinter. The now 8-year-old Value Plus horse competed only twice last year but won both times. He captured the Mighty Beau Overnight Stakes at Churchill then scored his first Grade I win ever in the Highlander Stakes at Woodbine. He had previously won Grade 2 and 3 events. Bred by Snow Lantern Thoroughbreds, Long On Value earned $154,560 in 2018 and $1,136,253 in his career. He is out of the Orientate mare, Long Message.

Realm will receive Champion Dirt Male recognition for bankrolling $126,170 from six starts. The Barclay Tagg trainee, bred by Morgan’s Ford Farm, captured an allowance optional claimer at Belmont in June and the Alydar Stakes at Saratoga in August. The 6-year-old Haynesfield gelding is out of the Chief’s Crown mare, Shawnee Country. Realm has won $364,095 in purse monies from 24 career outs.

9-year-old Zanclus is the 2018 Champion Over Fences. Lightly raced with only nine career starts, the Xenodon gelding was 2-for-2 last year highlighted by a win in the $100,000 Virginia Gold Cup. That May performance came via an impressive gate-to-wire performance. Owner/breeder Sara Collette’s charge also won the My Lady’s Manor Timber Stakes at Monkton last April. Trained by Neil Morris, Zanclus is out of the Two Smart mare, Jordani.

Champion Virginia Raised Horse honors will go to Sadler’s Joy, who won $922,000 in 2018 alone courtesy of a pair of seconds and thirds in Grade I stakes events. The Kentucky-bred was runner-up in both the Man o’ War and Woodford Reserve Manhattan Stakes and third in the Joe Hirsch Turf Classic and Longines Breeders’ Cup Turf. The now 6-year-old Kitten’s Joy horse was triumphant in the Grade 2 Mac Diarmida Stakes at Gulfstream. Owned and bred by Woodslane Farm in The Plains, Sadler’s Joy has won $2,150,288 from 22 starts. He is out of Dynaire by Dynaformer.

Non-horse awards will be presented to the William Backer Estate for Top Virginia Breeder and to Susan Cooney as Top Virginia-Based Trainer.