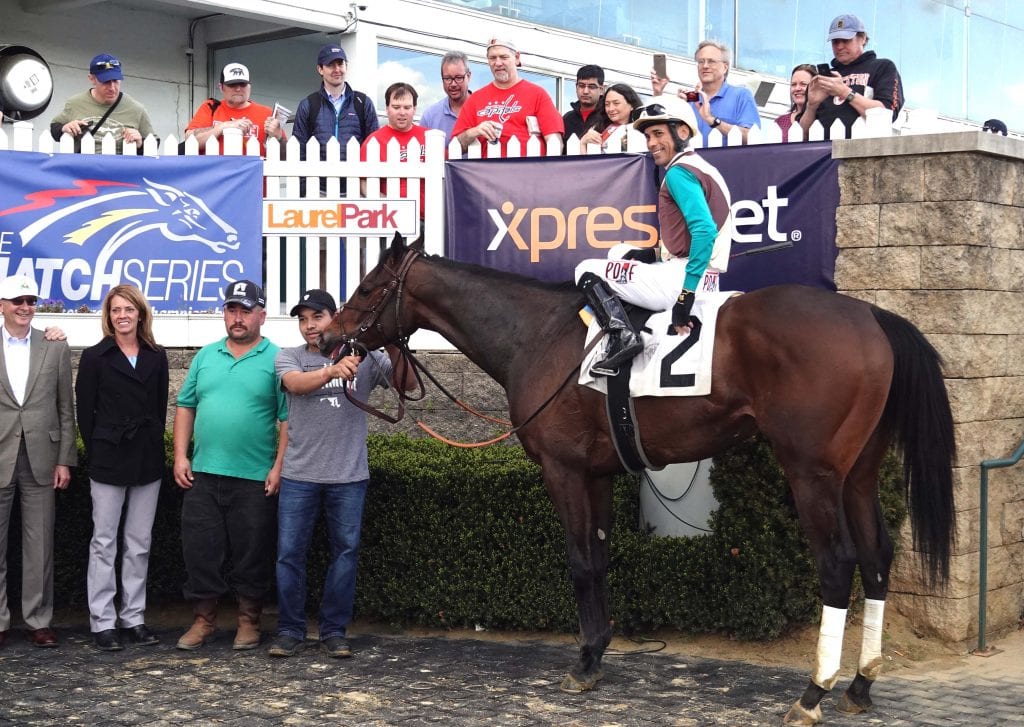 Impressive as he had been in putting together a five-race win streak, four of them in stakes, Runnymede Racing’s Alwaysmining took it to another level with an11 ½-length romp in Saturday’s $125,000 Xpressbet Federico Tesio at Laurel Park, punching his ticket to the 144th Preakness Stakes (G1).

The 38th running of the Tesio for 3-year-olds at 1 1/8 miles highlighted an 11-race Spring Stakes Spectacular program of seven stakes worth $750,000 in purses. For the fourth straight year, the Tesio served as a ‘Win and In’ event for Triple Crown-nominated horses to the Preakness, the Middle Jewel of the Triple Crown, May 18 at legendary Pimlico Race Course.

“As long as we come back ok, that’s our goal,” winning trainer Kelly Rubley said.

Tested in the early stages for the first time during his streak, now at six straight, Alwaysmining settled in third down the backstretch and met no resistance sweeping to the lead on the outside around the turn, powering through the lane under a hand ride from Daniel Centeno to hit the wire in 1:50.12 over a fast main track.

It was the fastest 1 1/8-mile Tesio, which has also been contested at 1 1/16 miles, since Xchanger ran 1:14.98 in 2007, when the race was held at Pimlico. Alwaysmining becomes the eighth Maryland-bred and first since Concealed Identity in 2011 to win the Tesio since it was opened up beyond restricted company in 1987.

“You just hate to get overconfident, but this is what I had expected to happen so I’m really glad it came true,” Rubley said. “We’re all very excited. It’s a fabulous day.”

A front-running winner of his previous five races by 25 combined lengths, Alwaysmining was outrun to the lead by Bozzini, coming back on a week’s rest, who coasted through an opening quarter-mile in 25 seconds pressed by 45-1 long shot Trifor Gold, going the half in 48.47.

Centeno had Alwaysmining in the clear in third, ready to pounce, which they did as the field left the backstretch after six furlongs in 1:12.97. Having displayed an ability to go two turns with his victory in the Private Terms Stakes March 16, Alwaysmining willingly outdistanced his rivals with little urging from Centeno.

“The plan was to try to make the lead, but I didn’t want to chase them, so I let them go. I decided to take him back and put him behind them. He was comfortable, nice and relaxed. I put him on the outside on the backstretch and when it was time to go, he took off,” Centeno said. “[The Preakness] will be a completely different game. I told Kelly, he’ll be completely relaxed. We don’t need to put him on the lead. We can do whatever we want with him.”

Rubley had worked Alwaysmining behind horses, felt confident the gelded son of Grade 1 winner Stay Thirsty was not reliant on the lead, and was relieved to see her assessment was on the mark.

“Honestly I was glad to see that he settled and he was able to relax,” she said. “It looked like it got a little tight, but Danny didn’t really think it did. Somebody had to test us sooner or later. I’m glad we got it out of the way here, and I’m confident that he handles it well.”

Now a five-time stakes winner, following the Maryland Juvenile Futurity and Heft at 2 and Miracle Wood to open his sophomore campaign, Alwaysmining turned in what Rubley felt was his most impressive performance to date.

“I think it is because we actually had a bit more of a challenge at the start of this race and I think that was good to see, that this horse is as versatile as we thought he is,” she said. “He didn’t have a problem relaxing and then when it was time to go, he went.”

Trifor Gold was a distant second, two lengths ahead of Bozzini, followed by Dixie Drawl and Tybalt. Majid was scratched.

The Federico Tesio, a Grade 3 event from 1988-97, is named for the famed Italian breeder, owner and trainer whose undefeated homebreds, Nearco and Ribot, dominate Thoroughbred bloodlines throughout the world. Tesio died in 1954 at the age of 85.