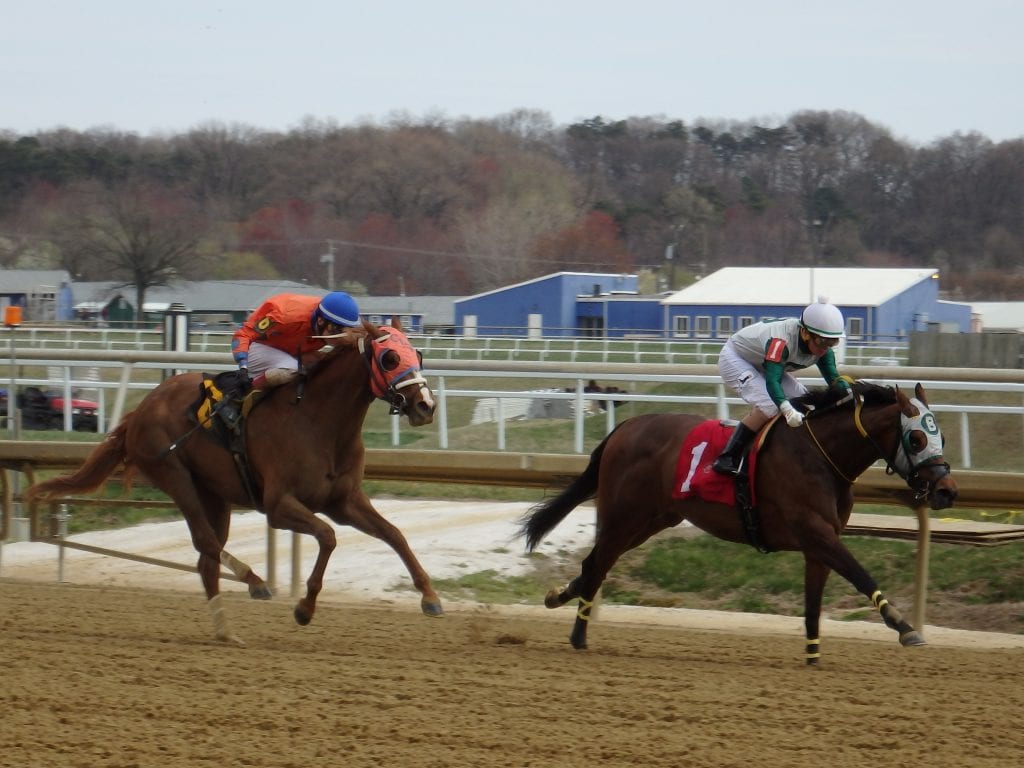 Blameitonthekiss broke her maiden April 7 at Laurel Park.. Photo by The Racing Biz.

A pair of first-time starters were impressive winners in maiden special weight competition at Charles Town Races over the past racing week.

On April 4, Takemetodinner blitzed a field of three-year-olds to win a 6 1/2-furlong contest by nearly seven lengths in 1:20.21 for the two-turn trip on a fast track. A Maryland-bred Tritap gelding, Takemetodinner zipped to the early lead and had no trouble pulling away from his overmatched rivals. Takemetodinner was ridden to victory by Christian Hiraldo for owner-trainer Ronney Brown, who also bred him. Takemetodinner paid $9.80 to win.

Two days later, another firster, High Fiber, dominated his five rivals in a state-bred maiden special weight event. With Ramon Maldonado up, High Fiber took the 4 1/2-furlong contest by three lengths in 52.42 seconds for the one-turn dash. High Fiber, a gelding by Fiber Sonde, was bred by Francis Daniel, III and is trained by David Walters for owner Michael Miller.

On April 5, Conquistodor Fuego, a six-year-old veteran of 37 races — without a single victory — finally broke through in his 38th career start. The Maryland-bred Friesan Fire gelding won by a half-length in 1:12.17 for six furlongs under Brittany Scampton. Bred by Dr. Fred Lewis and owned by his Lewis Family Racing Stable, Conquistodor Fuego is trained at Laurel by Carlos Mancilla. He now has a win to go with his dozen other in-the-money finishes, as well as earnings of nearly $53,000.

The following day, at that same $10,000 level, first-time starter St. Cherubin did the honors, romping to victory by seven lengths under jockey Jorge Ruiz. St. Cherubin, a four-year-old filly by Forty Tales, is trained and owned by Corby Caiazzo and was bred in Maryland by Caiazzo and Stephen Sinatra.