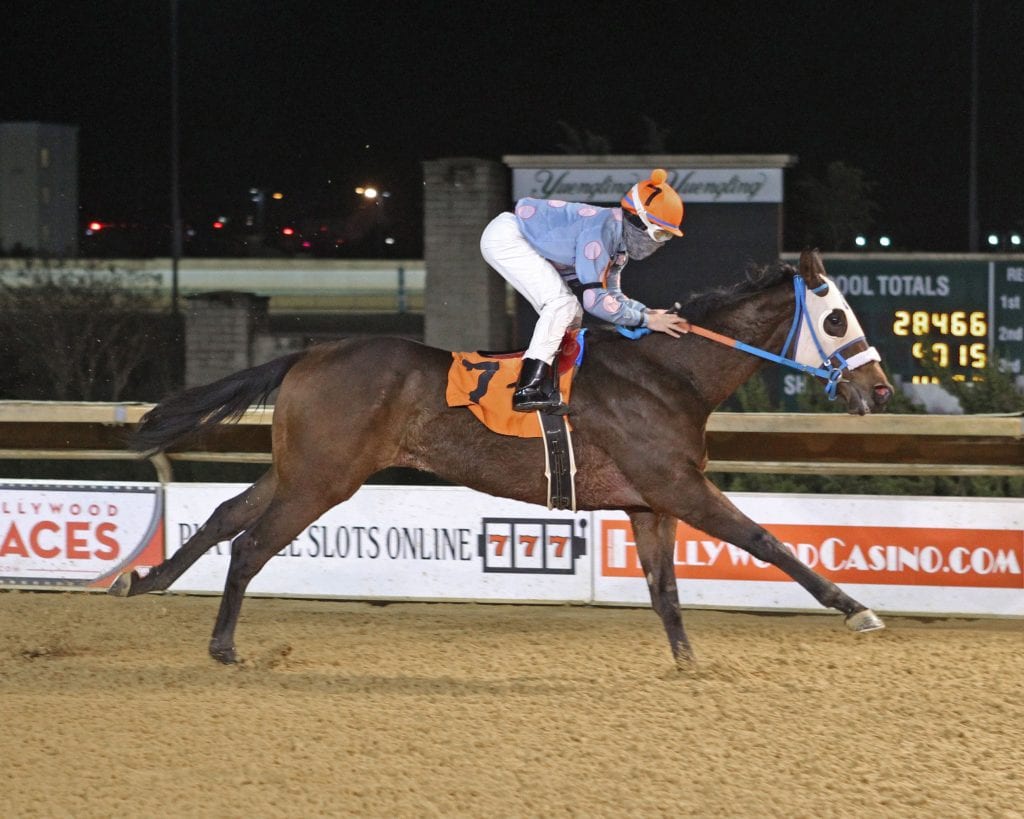 In the weeks leading up to his career debut early last month at Charles Town Races, Hero’s Man wasn’t getting much buzz. The James W. Casey-trained sophomore son of Charitable Man went postward as the 5-1 fourth choice in a group of 10 state-bred maiden special weight runners.

Rest assured, when Hero’s Man makes his second start, his first against winners, he will receive considerably more backing. Slated to run Wednesday, March 6, Hero’s Man has been installed as the 8-5 morning line favorite in a 4 ½-furlong allowance test for West Virginia-breds.

That’s because Hero’s Man dominated his rivals in a six-length score in his one-turn dash debut by getting the 4 ½ furlongs in 52.42. That was two-fifths faster than older state-bred maidens completed the distance later on the card, and it was identical to the time posted by state-bred allowance runners immediately after Hero’s Man’s race.

Hero’s Man, a son of Charitable Man out of the Sea Hero mare, Hero’s Siren, even surprised his longtime local owner-trainer. His damsire, Sea Hero, won both the Kentucky Derby and Travers Stakes in 1993, while his dam recorded only one win from 17 career starts.

In recent years Casey has sent out a steady stream of high-class runners, the best of them including Russell Road, Charitable Annuity, and the talented but star-crossed William and Mary. Whether Hero’s Man joins that roster is a question for the future, of course.

Those three runners present fairly different early-career pictures. For instance, of those three talented predecessors, only William and Mary won at first asking, while both Russell Road and Charitable Annuity won their second starts. Both Russell Road and William and Mary made their career debuts in August of their juvenile seasons, but Charitable Annuity was actually unraced at age two.

“When he was training down at age two for his career debut, William and Mary was further along than Russell Road,” Casey recalled. “Charitable Annuity didn’t make the races at two. I remember thinking that he would, but we just kept having little setbacks with him. He turned out to be really good at three and four because we took our time with him. We took our time getting Hero’s Man to the races, but he looks like he’s going to be okay. Of course, only time will tell.”

Russell Road enjoyed a tremendous career for Casey and owner Mark Russell before eventually retiring with 31 wins and over $2 million banked from 62 lifetime tries before retiring and then unexpectedly passing. Charitable Annuity certainly made up for lost time after bypassing his freshman campaign, winning seven of 10 starts at age three, capped by a determined score in the $500,000 West Virginia Breeders Classic. He won six of 10 starts at age four and earned nearly $300,000 and then won the Classic for a second time in 2017 and eventually retired with 15 wins and nearly $867,000 banked from 34 career outings.

William and Mary emerged on the scene at age two in 2017, winning his first two starts and four of his first five outings, and he currently owns seven wins and earnings of just over $180,000 from 11 lifetime tries. He has been idle since running third in the Robert Leavitt Memorial last summer, but Casey said that the homebred son of Windsor Castle is back in training and on target for a seasonal debut in April and then perhaps a full slate of stakes for West Virginia-bred older males. Casey never made him eligible to the Breeders Classics, so he would have to supplement into a WVBC event at a cost of 10 percent of that particular purse.

While Russell Road and Charitable Annuity enjoyed superb careers — and William and Mary could still emerge as a Classic candidate this summer and fall — Hero’s Man took the first small steps when he won his career debut last month by over six lengths That evening, he showed good early speed while dueling for the lead before drawing away to win easily. It was perhaps the most impressive debut of the year to date at Charles Town.

Casey, pleasantly surprised at the result, is looking forward to the future with his new charge – but he’s also not getting ahead of himself.

“He finished up like he wants to go further. I’m looking forward to trying him 6 1/2- or seven furlongs up here,” the trainer said. “I think those distances will be just right for him. He’s got plenty of time to develop into a stakes horse. But I still prefer to take my time with him.”