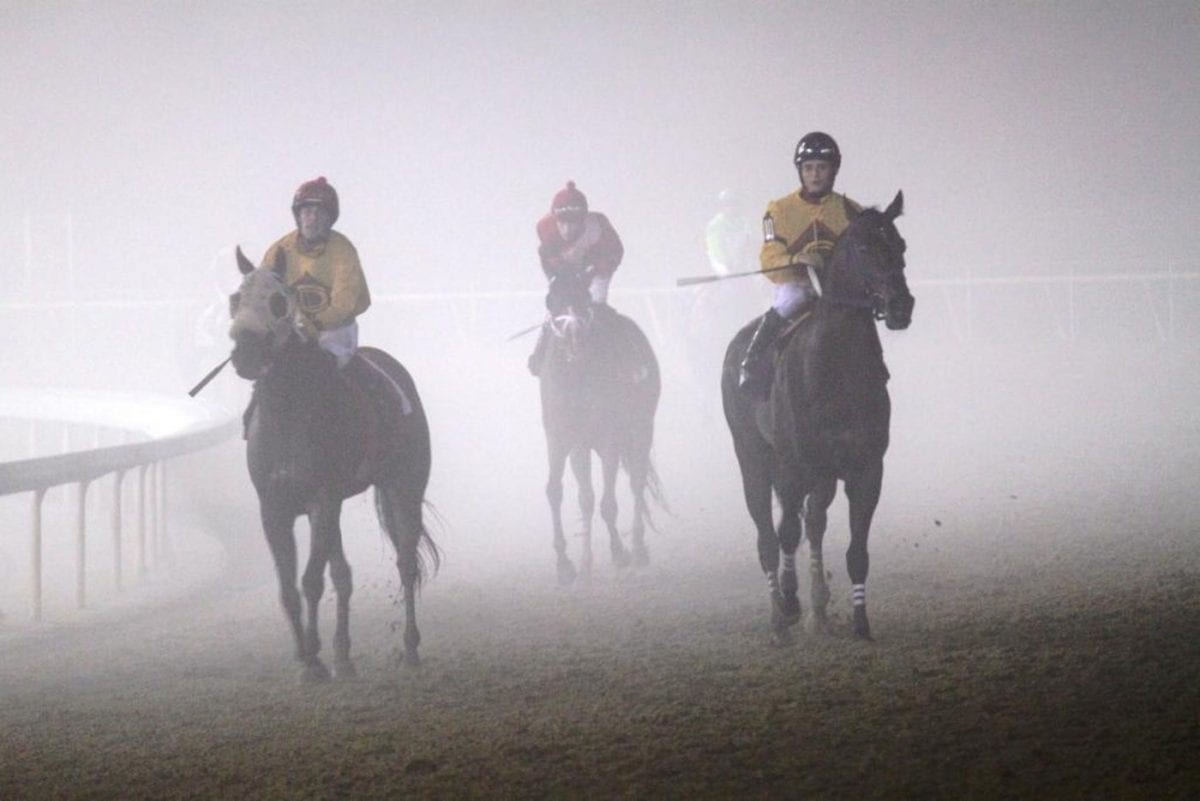 Horses emerge from the fog at Colonial Downs. Photo by Nick Hahn.

With a clean break out of the starting gate, the new ownership of Colonial Downs is aiming to get Virginia racing back to the winner’s circle – and soon.

Live thoroughbred racing is scheduled to return to Colonial Downs at 5:00 pm on Thursday, August 8. With a couple of days to work out the kinks, track officials are looking forward to the first Saturday of the meet. The re-engaged thoroughbred meet will have 15 days of racing over five weeks.

“We plan on making every day a big event,” Colonial Downs general manager John Marshall in an interview after the meeting. “But August 10 is going to be special.”

Marshall did not elaborate.

In New Kent County, the host locality of the track, the target for horses to arrive is July 25 for the opening of the stable area. Two weeks later, Colonial will host its first live flat racing since July 2013.

The new owners commended previous ownership for keeping the backstretch in good condition during the five-year hiatus. The 1 ¼-mile dirt course will see 5,000 tons of new material added to create a 4 1/2″ reconstructed cushion.

The dormant grass leaf of the turf course will likely be burned in April, an annual springtime barbeque of the Bermuda that turns the turf black, enhancing sunlight and nutrient absorption for early summer growth.

Racing officials expect an 80%-20% turf to dirt racing ratio – one that would be familiar to longtime Colonial observers. Of course, that split may be revised, depending on how races fill and what the horse population in the mid-Atlantic demands, Marshall told the Virginia Racing Commission.

“Initially we looked at $400,000 a day, but that starts to look ordinary when you look around the Mid-Atlantic,” noted Marshall. “We want the first year back to be special so it may be closer to $500,000.”

A stakes calendar that will include a $250,000 Virginia Derby (gr. IIIT) may be finalized by early March with a condition book to be released shortly after that.

A ribbon-cutting event for the renovated Colonial Downs grandstand will occur on April 18 with the opening for simulcasting slated for Friday, May 3 (Kentucky Oaks day).

Another target is hiring targets. From 20 jobs in December to currently 50 jobs, Colonial Downs hopes to have 350 employees statewide on the payroll by April. A recent job fair resulted in 54 new hires.