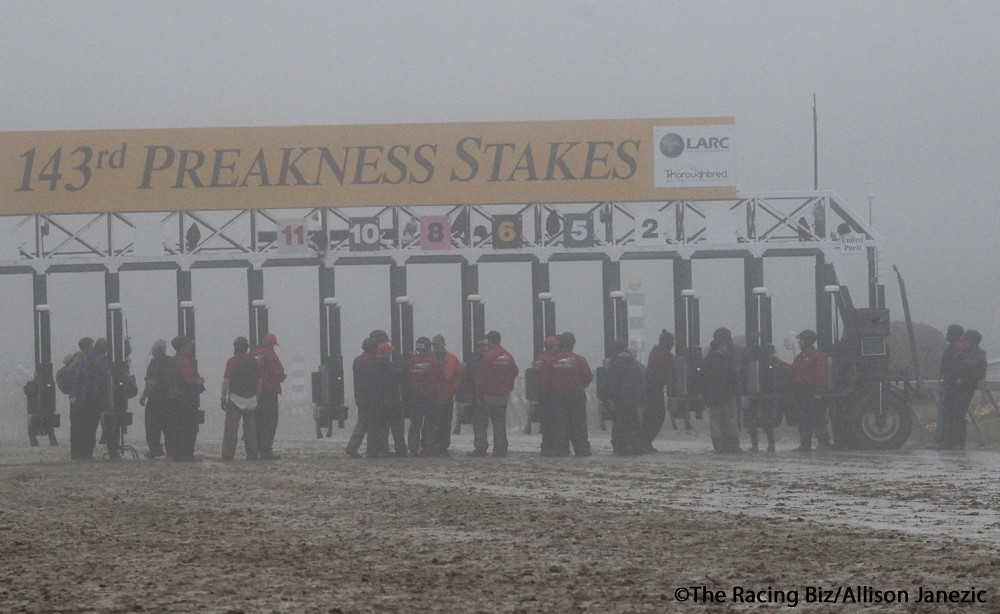 Pimlico in the fog. Photo by Allison Janezic.

by Frank Vespe with reporting from Gary Quill

The release, last week, of the second phase of the Maryland Stadium Authority’s Pimlico study provided yet another step towards clarifying the future of Maryland racing.

First came the myriad improvements to the physical plant at Laurel Park. Next was the announcement, first reported in The Racing Biz, that Bowie – the track that wouldn’t die – might come back to life yet again, this time as a “world-class” training facility.

And now the Pimlico study.

To some, these are obvious and necessary changes for the good of the industry. To others, they are a betrayal of Maryland racing’s rich history and Pimlico’s place in it.

But to trainers based at Old Hilltop, the proposal is both more consequential, and more personal.

“I think that the city cannot let this place go,” said trainer Kieron Magee, whose Pimlico-based stable finished in a three-way tie for most wins at the 2018 Pimlico meet. “To lose Pimlico, and once it’s gone, it’s gone forever, Baltimore City will lose in the long run. It’s part of Maryland history. It would be a shame to see it leave.”

“I would just like to see racing still at Pimlico, just the history and everything,” agreed Dorothy “Beth” Worton. Her Pimlico-based stable is having its best year ever, with nearly $400,000 in earnings this year, more than double her previous high. “I mean, think of if Churchill Downs no longer held the Kentucky Derby. I think for the community and racing in general, the Preakness should stay here.”

While the history and tradition are certainly one consideration, there are practical arguments both for and against the Pimlico rebuild outlined in the study.

One challenge is the money. The study projects a cost of about $424 million for the new Pimlico. The Stronach Group, parent company of the Maryland Jockey Club, which owns Old Hilltop, has made clear that, given its ongoing investments in Laurel Park, it has little interest in making heavy investments in a second racetrack. And the city of Baltimore and state of Maryland have their own budget woes with which to contend.

“You have the historic value there,” said another Old Hilltop-based trainer, Mary Eppler, who tied with Magee for the wins lead at the most recent Pimlico meet. “But where they come up with the money is beyond me.”

On the other hand, there’s the matter of the turf. Turf racing has grown substantially in Maryland in recent years. In 2012, horses made 2,429 starts on the grass in Maryland; in 2017, according to the Jockey Club, that number had grown to 3,811 – a nearly 57 percent increase in just five years.

That’s been challenging enough on Laurel’s course, even with several hundred of those starts taking place at Pimlico.

“How can they handle running on the turf course year-round at Laurel?” wondered Eppler. “Are they going to redo the turf course every year? I don’t see how they can support grass racing at Laurel all year from the end of March all the way through November.”

Yet in addition to history, money, and the turf course, another issue looms large for these trainers: lives built around a routine that involves morning training at Old Hilltop.

During the period that Pimlico was closed for training, Eppler was stabled at Bowie for a year and subsequently at Laurel. The veteran trainer lives in Westminster, northwest of Baltimore – 30 minutes from Pimlico, but an hour and 10 minutes for Laurel “in good traffic,” she says. She said that she won’t do that again.

“If they’re not going to have stabling at Pimlico, I’ll be leaving Maryland,” she said. “If that happens, I guess I’ll move and live down [in Florida] the rest of the year.”

Magee, who lives north of Baltimore and about an hour from Laurel, expressed similar sentiments.

“It means I’d have to move to Laurel,” he said. “It’s bad enough driving down there three days a week, but to drive down there seven days a week is tough.”

He said he would consider moving his operation elsewhere in that event, perhaps to Delaware Park.

“I just hope that Pimlico is here for a long, long time,” he added. “There’s too much money involved for the city to let it go.”

Worton adopted a more philosophical tone. She has been stabled, at one time or another, at all three tracks.

“I like it here at PImlico,” she said. “I’d hate to have to move, but I’ll make do with wherever they send me. I’m happy just to have stalls. I’ll make myself happy wherever we have to go. But I would love to see them keep it open and keep running the Preakness here.”