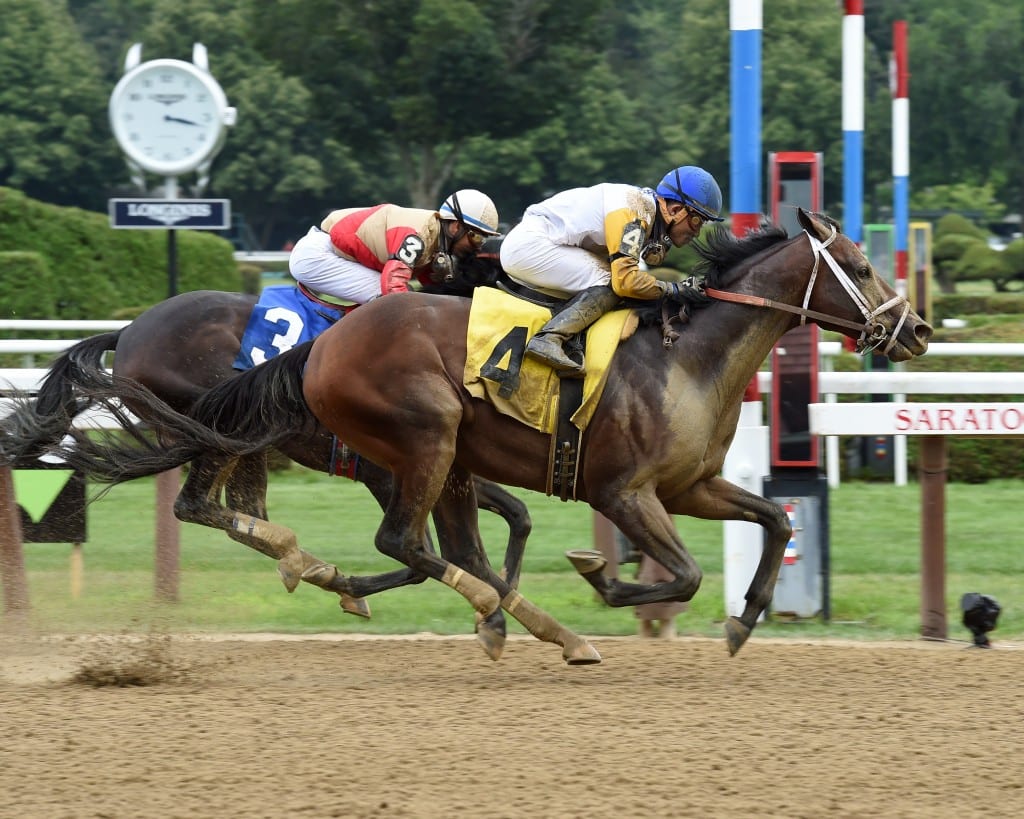 “I’m looking forward to it,” Dallas Stewart, trainer of Seeking the Soul, said Friday. “The horse is doing great.”

Bred and owned by Charles Fipke, Seeking the Soul kicked off his 2018 campaign running fifth in the second edition of the 1 1/8-mile Pegasus in January, won by Horse of the Year Gun Runner in his career finale.

He has placed in four of five subsequent starts, all in stakes, topped by a victory in the Ack Ack (G3) Sept. 29. He was beaten 2 ¾ lengths by City of Light when second in the Breeders’ Cup Dirt Mile (G1) prior to running third in defense of his 2017 triumph in the Clark Handicap (G1) Nov. 23.

“He was second in the Breeders’ Cup to a very nice horse, and he’s competed well all year. He just had one bad race up at Saratoga for some reason but a lot of horses get off form up there,” Stewart said. “The horse has had a really good year. He didn’t do so well in the Clark, but he didn’t do bad. He came out of it good.”

Seeking the Soul returned to the work tab Friday morning for the first time since the Clark, going four furlongs in 51 seconds at Fair Grounds.

True Timber is the second horse owned by Calumet Farm to be targeting the Pegasus. Earlier this week, Hall of Fame trainer D. Wayne Lukas said Preakness Stakes (G1) runner-up Bravazo, second in the Clark and third in the Dirt Mile, was Pegasus-bound.

“He ran a huge race in the Cigar Mile and he galloped out really strong, so we talked it over with the owners and decided to point for the Pegasus,” trainer Kiaran McLaughlin said. “It’s a big event and hopefully we get in there and run good and everything works out and we enjoy the day.”

True Timber was second in the Bold Ruler (G3) prior to the Dec. 1 Cigar Mile, both at Aqueduct, and before that won back-to-back optional claiming allowances at Belmont Park three months apart. He has placed in five career stakes, four graded.

“He’s in very good form right now. He’s a nice horse,” McLaughlin said. “He’s still in New York for now. We haven’t decided when to bring him down but we’ll get him here pretty soon.”

Based at Palm Meadows, Gulfstream’s satellite training facility in Palm Beach County, McLaughlin is a two-time winner of the Pegasus’ predecessor, the Donn Handicap (G1), with Albertus Maximus (2009) and Horse of the Year Invasor (2007).

“We were able to win the race with Invasor before he went to Dubai,” McLaughlin said. “We’re happy to be back in it and hope all goes well with the horse. We’ll point him that way.”