Diamond B to add Social Inclusion, Eastwood for 2019 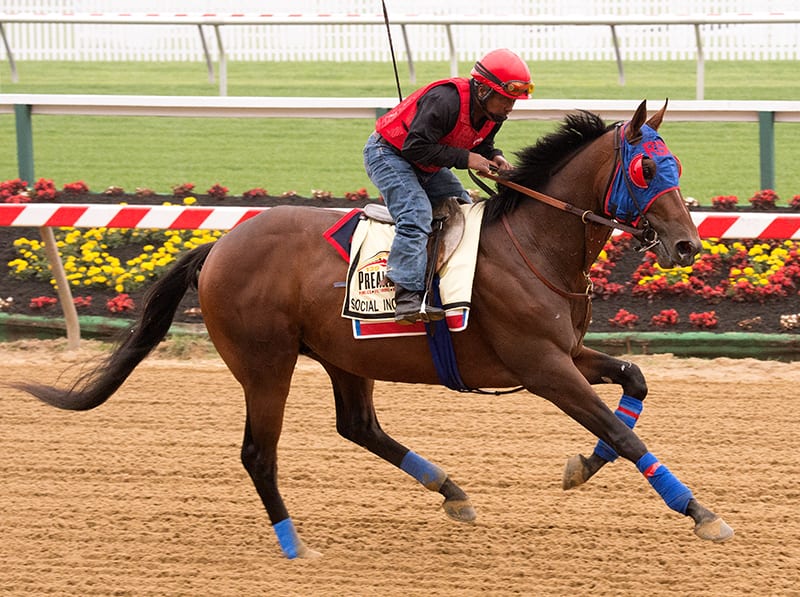 Social Inclusion prior to the 2014 Preakness. Photo by Jim McCue, Maryland Jockey Club.

From a Diamond B Farm release

Diamond B Farm will add a son of Pioneerof the Nile and a son of Speightstown to its stallion roster, the farm announced.

Social Inclusion, an impressive track record-breaker and classic performer, will relocate from John and Susan Sykes’ Woodford Thoroughbreds near Ocala, Fla., to Glenn and Becky Brok’s Diamond B Farm near Mohrsville, Pa., for the 2019 breeding season. He will stand for $5,000, live foal.

And Eastwood, a sound and speedy son of G1 Breeders’ Cup Sprint winner and prominent sire Speightstown, will join him and also stand for $5,000 for the 2019 breeding season.

“He was a super-impressive racehorse… we are always trying to get good sire power in Pennsylvania and I think we’ve succeeded in identifying a horse like him,” Brok said. “He’s got a great disposition. He’s a big horse, standing 16.3 hands; he’s got a lot of bone, with a big hip and shoulder. He’s built like a horse that can get you both speed and distance.”

In his second start, he won an open allowance race in wire-to-wire fashion, defeating future champion older horse Honor Code by 10 lengths, and covering 1 1/16 miles in 1:40.97, a new track record.

Social Inclusion followed that effort with respectable third-place finishes in the G1 Wood Memorial (won by Wicked Strong), G1 Preakness Stakes (won by California Chrome), and G2 Woody Stephens (won by Bayern). He completed his race career with earnings of more than $450,000.

“I don’t think there are any other horses with this sire line in Pennsylvania,” Brok said. “And of course, the outcross of the Saint Ballado mare on the female side makes it easy to nick. That being said, he’s an exciting, good individual.”

Social Inclusion’s first foals hit the ground this year and have already made a strong impression on breeders.

After posting eye-catching victories in his first two starts as a 3-year-old, Eastwood was bought for $800,000, the second highest-priced horse at the 2013 Fasig-Tipton summer horses of racing age sale.

Shannon Potter of Taylor Made Sales Agency, agent, signed the ticket for the colt on behalf of Louise and Kiki Coutelis’ Paris, Ky.- based Town & Country Farms. Consigned by Baccari Bloodstock, agent, the strapping chestnut is the first foal out of the Deputy Minister mare Fifth Avenue Ball.

In Eastwood’s career debut, the then-three-year-old won a six-furlong contest at Belmont Park by 2 1/4 lengths May 27, followed by a gutsy head score in an allowance race at the same distance at the New York track.

Later in his career, Eastwood scored impressive victories in a pair of allowance contests at Saratoga and Keeneland. Still running sound as a 7-year-old, he was runner up in the 2017 G3 Los Angeles Stakes at Santa Anita Park, defeating G3 winner Kentuckian and stakes winner Grazen Sky. Eastwood retired from racing with earnings of $265,545.

Eastwood was originally a $240,000 purchase at the Keeneland November breeding stock sale when Baccari bought him from Taylor Made Sales Agency, agent. He was bred in Kentucky by Fred W. Hertrich III.

“Speightstown is revealing himself as a sire of sires,” said Glenn Brok. “We’re excited about bringing this son of Speightstown to Pennsylvania.”