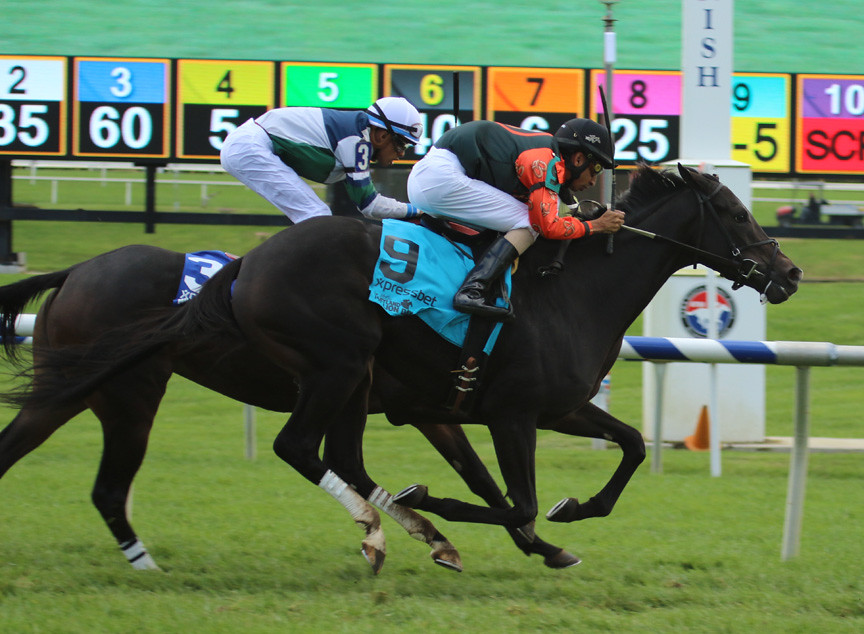 My Sistersledge won the Ladies. Photo by Laurie Asseo.

After a seemingly endless period of rain, Maryland racing caught a break over the weekend, and Maryland Million day was crisp and occasionally sunny – with nary a drop of rain to mar it.

Some of our observations, plus a photo gallery of Maryland Million 2018:

Great Notion, the 18-year-old stallion standing at Northview Stallion Station in Chesapeake City, MD, entered the day as the leading active sire of Maryland Million winners and built on that prior success with a three-win day.

Crabcakes, a four-year-old Great Notion filly, defended her title in the Distaff, taking the seven-furlong affair by a half-length in 1:22.85 for seven furlongs. Then, two races later it was Lewisfield carrying the family banner, taking the Sprint in dazzling fashion by almost nine lengths in 1:09.08 for six furlongs. And finally, eight-year-old Talk Show Man won the Turf for the second time, outslugging favored Phlash Phelps by a half-length in 1:38.64 for a mile over yielding ground.

Oh, and for good measure, Great Notion also is the damsire of Awesome Jazz, who broke her maiden in the nightcap.

It was a merry Maryland Million, indeed, for members of the Merryman family.

The biggest winner was trainer Katy (Merryman) Voss, who earned the first Maryland Million Classic win of her career when Saratoga Bob — a Friesan Fire gelding that she also co-bred, with the horse’s namesake Bob Manfuso, and co-owns with Manfuso and Wayne Harrison — held off a determined rally from Dothat Dance to win by a half-length in 1:51.28 for 1 1/8 miles.

Ann Merryman also got into the act. She sent out Barin to score a 23-1 upset in a turf starter handicap, the son of Pioneerof the Nile rallying from the rear of the field to win by a neck. She also got a good effort from Grandiflora; the veteran led for a long way before settling for third, at 28-1, in the Turf.

Finally, Edwin Merryman took the nightcap, a maiden claiming event, with Awesome Jazz, an Awesome Again filly who is out of the Great Notion mare Jazzy Idea, who was by far the richest horse Edwin Merryman ever trained.

New kids on the block

Three sires earned their first Maryland Million laurels Saturday in the seven major races on the card (that is, excluding the starter races).

Friesan Fire earned his first when Saratoga Bob, with Edgar Prado up, won the Classic. Friesan Fire, at Country Life Farm, had entered the day with a Maryland Million ledger of 14:0-2-1.

Both two-year-old races went to new stallions, as well. The Nursery, for two-year-olds, went to Follow the Dog, the first Million winner for Bandbox. Follow the Dog, with Julian Pimentel up for trainer Marya Montoya, zipped the six-furlong distance in 1:10.14. Three races later, the Claudio Gonzalez trainee My Star Potential won the six-furlong Lassie, becoming the first Million winner for the deceased Tritap. With Jomar Torres up, My Star Potential went the distance in 1:11.73.

One for the record books

Jockey Edgar Prado won his first two Maryland Million races in 1992. On Saturday, 26 years later, he won the Classic aboard Saratoga Bob. That gives him 18 Maryland Million wins — one more than Ramon Dominguez recorded in his decorated career and the most of any rider in Million history.

His lead is anything but safe, however. Mario Pino, who rode but did not win on Saturday, is nipping at Prado’s heels with 16 wins. And Julian Pimentel won twice on Saturday to up his career total to 13.

In the day’s fourth race, the Mike Trombetta trainee My Sistersledge defended her title in the Ladies, just overcoming the ultra-game longshot My Vixen, who was nearly 70-1, to win by a neck in 1:55.74 for 1 1/8 miles over yielding ground. Regular pilot Julian Pimentel did the honors. That gave Trombetta, whose first win came in 2006, his eighth overall.

Later, in the Turf, Talk Show Man overcame favored Phlash Phelps to win by a half-length in 1:38.64 for a flat mile over yielding ground. Jevian Toledo, who won three on the day, including a score in the Sprint with Lewisifield, was in the irons. The win gave trainer Hamilton Smith his eighth Million winner. His first came in 1997.

The wins move the two men even with Bill Boniface, Tony Dutrow, and Graham Motion with eight Million victories. Ahead of them are Dale Capuano, who has 11, and King Leatherbury with 10.