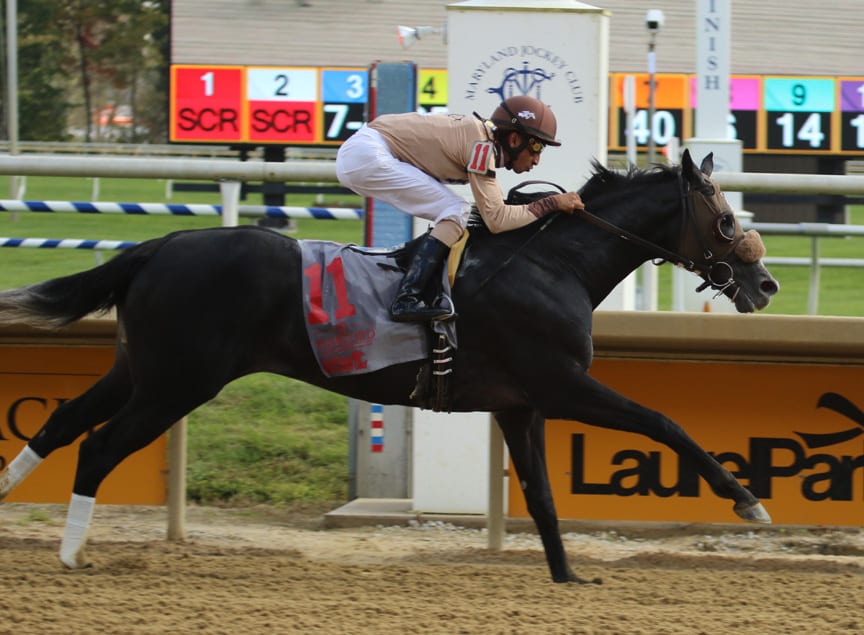 
Winning any Maryland Million race can be a tough task to attain for horse, jockey, trainer or breeder, so winning a Maryland Million race in consecutive years can be a considerably more difficult proposition. Nevertheless, a trio of talented mares that scored on Saturday afternoon successfully defended their respective title from a year ago, although one of which did so in her second career.

In a chalky early portion of the program, Crabcakes lived up to her billing as the 2-5 favorite in the $100,000 Maryland Million Distaff Handicap for fillies and mares at seven furlongs on the main track when she just outlasted the late surge of My Magician to score by one-half length in 1:22.85 under Forest Boyce. Oddly enough, My Magician rallied into second, completing the exacta for the second consecutive year in this event.

A four-year-old daughter of Great Notion trained by Bernie Houghton for Morgan’s Ford Farm and bred by the late Binnie Houghton’s Buckingham Farm in Kent County, Crabcakes notched her third win in four starts this year and pushed her

seasonal earnings to nearly $130,000. Crabcakes now boasts nine wins and nearly $425,000 banked from 15 career outings and became only the second filly to win this event in consecutive years, the other being Hall of Famer Safely Kept, who won it three straight years (1989-1991).

“She loves racing here and she’s a professional when it comes to shipping,” trainer Bernie Houghton said. “Last year we went to Ohio for the next race, but I think she’s going to get a little break. I know how much she loves racing here. The [Grade II] Barbara Fritchie is definitely a possibility next year. I think she’s just continuing to get better as she gets older. She had to move a little earlier than she wanted to today, but she’s such a game mare she wasn’t going to let that other horse go by her.”

Jockey Forest Boyce has been aboard Crabcakes for her last nine starts and guided the Great Notion filly to six wins along the way, capped by her consecutive scores in the Maryland Million Distaff Handicap. Boyce admitted she was in the catbird seat early while sitting just outside longshot Wowwhatabrat down the backside, but when My Magician launched her bid leaving the quarter pole, Crabcakes and her rider got pressed into action somewhat prematurely.

“She broke really well and I was in in ideal spot down the backside,” Boyce said. “Then [My Magician] came to me going into the far turn, and we had to battle from there. That other horse got close to her, but this filly always digs in when she gets challenged. She dug in gamely in the lane. We had to move a little earlier than I wanted, but she’s really game. That’s one thing about this filly, she doesn’t like to get passed and she has so much heart.”

One race later on the card, My Sistersledge (Julian Pimentel) just lived up to her role as the 3-5 favorite in the $125,000 Maryland Million Ladies for fillies and mares going nine furlongs over the yielding turf course when she eventually overhauled longshot My Vixen to score by a neck. Roughly 40 minutes after Crabcakes successfully defended her title in the Distaff, My Sistersledge prevailed in the Ladies for a second straight year for trainer Mike Trombetta and owner-breeders John and Cheryl Banner..

“One thing about running on a yielding turf course, you never know how the horses are going to handle the course,” Trombetta said. “She has always done well going long on the turf course here, but when it comes up that soft you just never know. She really had to dig in that last eighth of a mile. I felt like I had to run her on the dirt last time out [Oct. 6] because I didn’t want her coming into this race short. If we skip that race then it’s eight weeks off coming in here and that probably would have been too much.”

Then several races later on the card, Follow The Dog (Pimentel) sat just off the early pace, surged to command at the head of the lane and prevailed by three lengths in the $100,000 Maryland Million Nursery. A juvenile son of Bandbox trained by Marya Montoya for owner Waldorf Racing Stable, LLC [David Wright], Follow The Dog was the first Maryland Million winner for his connections — but the second straight winner of the event out of the Cozzene mare, Two’s Cozy who was the dam of 2017 Nursery hero Clever Mind for trainer Graham Motion.

“I wanted to get a Bandox and from what I heard this one was the best one in the sale,” said Wright, who named his stable for his late Terrier-mix. “His dam, Two’s Cozy, threw the winner of this race last year so it’s special for me and for her. I’m excited for the trainer. To get a stakes win on Maryland Million Day with this horse is exciting. This horse had been drawing inside in his previous three races, but today he finally drew outside and he was able to work out a great trip.”

Prior to the Maryland Million Nursery, Follow The Dog had not crossed the wire first in any of his three previous outings, having been promoted from second to first when Passcode was disqualified and placed second for interfering with the Montoya trainee in the early stages of a maiden special weight event at Laurel last month. He finished a nondescript fourth in an allowance race at Parx on Oct. 1, but breezed smartly in his final prep for the Nursery.

“My owner has always called me the queen of the rail, since my horses always seem to draw inside in sprints,”.Montoya said. “When he drew the 11 today, I knew he would be able to stay clear of trouble and work out a trip. Winning any stakes is special, but being able to get my first Maryland Million Day stakes win with this colt is really special. I’m really happy for the owner. He named his stable for his dog, Waldorf, and he passed way earlier this year. So this is a nice win in his honor.”