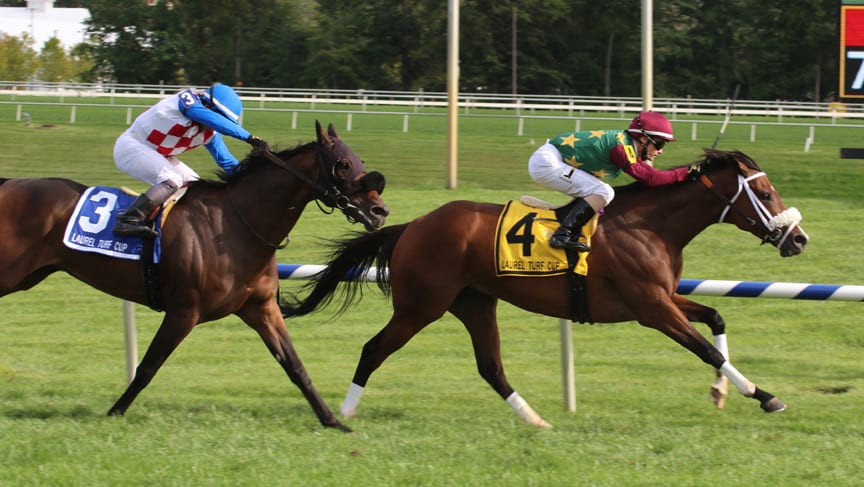 Grade 2-placed Hello Don Julio, making his Laurel Park debut, relaxed on the lead under jockey Channing Hill and displayed good energy when asked down the lane to dismiss 99-1 long shot Cooptado for a popular three-quarter-length win in the $100,000 Laurel Turf Cup.

It was the fifth career win and first in a stakes for Michael Dilger owned-and-trained Hello Don Julio ($5), favored at 3-2 in the field of 11. The winning time for 1 ½ miles was 2:34.63 over a good All Along turf course.

Breaking from Post 4, Hello Don Julio was able to outrun Final Copy on the inside to the lead through a quarter-mile in 25.48 seconds. Final Copy was swung outside by Hall of Fame rider Gary Stevens and took a short lead after a half in 51.14, but it was short-lived as Hello Don Julio got it back and went six furlongs in 1:16.45.

Cooptado swung into a contending position three wide around the far turn but was unable to reel in Hello Don Julio through the stretch and wound up 3 ¾ lengths ahead of Postulation in third with Final Copy checking in fourth.

They were followed under the line by Scuba, Vintage Matters, Not in Charge, 2016 Laurel Turf Cup winner Renown, Decisive Triumph, Tizzarunner and Barney Rebel.

“To be honest with you I couldn’t believe how settled he was. Obviously the turf course was a little soft and he was so good,” Hill said. “It shows you how much class this horse has. He took a deep breath and as soon as Gary’s horse put a head in front, he took another deep breath. I was like, ‘Man, this is great from here.’

“From the eighth pole I was just hoping he would kick on,” he added. “The horse that ran second came at us a little bit and I was hoping he would find something and obviously he did. He just galloped away from them.”

Hello Don Julio, a 6-year-old son of 2005 Preakness (G1) winner Afleet Alex, closed 2017 running third in the Knickerbocker (G2) at Belmont Park and was winless in three tires this year, beaten 1 ¼ lengths while seventh in the Manhattan (G1) in his seasonal debut. Midwest-based Hill was riding for the first time.

“I didn’t want to go that fast. I thought we set a sensible pace and he punched on hard,” Hill said. “I’ll be honest with you, down the lane, I figured if that was it I’d have been real happy and he galloped out like he went five-eighths in 1:01. He came all the way back and I could barely pull him up.”

VALEDICTORIAN AT HEAD OF CLASS IN ALL ALONG

Epic Racing’s Valedictorian became a stakes winner for the second time in her career with a front-running 1 ½-length triumph in the $150,000 All Along Stakes, presented by Blackwell Real Estate, Saturday at Laurel Park.

The 1 1/16-mile All Along for fillies and mares 3 and older and the 56th running of the $100,000 Laurel Turf Cup, presented by Ourisman of Clarksville, for 3-year-olds and up going 1 ½ miles were among six stakes over Laurel’s world-class turf course that complemented the 27th running of the $250,000 Xpressbet Frank J. De Francis Memorial Dash (G3) on a 13-race Fall Festival of Racing program.

Under a heady ride from fan favorite J.D. Acosta, Valedictorian ($27.40) forged a comfortable early lead and had something left in the final sixteenth of a mile to turn back her 10 rivals and win in 1:45.74 over an All Along turf course layout labeled good.

“I looked back a couple of times turning for home and I saw she slowed down a little bit,” Acosta said. “I know the horses from off the pace are going to try to catch up to me but she left a little bit in the tank and she gave it to me.”

A 4-year-old New Jersey-bred daughter of Temple City out of the Smart Strike mare Smart N Classy, Valedictorian was hustled to the lead from the gate and was in front through fractions of 23.84 and 48.08 seconds tracked by 40-1 long shot So Innocent to her outside. Valedictorian remained in charge through six furlongs in 1:12.92 as 3-1 favorite Stormy Victoria picked up the challenge on the turn.

Valedictorian extended her advantage once straightened for home and held sway as fellow stakes winner Mythical Mission put in a late bid to run second. My Impression, trained by Hall of Famer Shug McGaughey, who had won the previous two runnings of the All Along, rallied on the outside to catch Lift Up by a nose for third.

Quick Witted, Not Taken, Stormy Victoria, Esquisse, So Innocent, Celestial Insight and Sophie is an Angel completed the order of finish.

“I just was really concentrating on the break and put her in front. Those were the instructions – just try to make her come down in the first half of the race and switch leads and slow down the pace because the turf is a little soft,” Acosta said. “I didn’t want to let her do too much and make her get tired in the end. Everything worked out because as soon as she got to the lead she relaxed and she was waiting like she knew what to do.”

It was the ninth win from 21 career starts and third in the last four tries for Valedictorian, head winner of the one-mile Jersey Girl Handicap July 4 at Monmouth Park. She is trained by Kelly Breen.

Trained by Patrick Kelly and ridden by Julian Pimental, Fire Key, winner of the Autumn Days Stakes at Aqueduct in November, has now won six of 16 starts on the turf and finished second on the turf another five times. Fire Key came into the Sensible Lady off a troubled 11th place finish in the Smart N Fancy at Saratoga Aug. 26.

“She’s been very sharp the last couple years,” said Kelly, a native of Maryland. “We came down here last year and just missed in this race. The plan was to try and get back this year and it worked out. She doesn’t win by much, but she’s gutsy.”

Making just her second career start and first in a stakes, Lael Stables’ Monkeys Uncle swept to the lead on the far outside and powered through the stretch to win the $100,000 Selima.

Ridden by Daniel Centeno for trainer Arnaud Delacour, Monkeys Uncle ($18.40) ran six furlongs in 1:16.11 over a good Fort Marcy turf course to win by a half-length. Shoobiedoobydo came with a steady run along the inside for second, a half-length ahead of Helen in third. Elsa, the even-money favorite, raced near the back of the pack in between horses and wound up seventh.

Unhurried in the early going as Margie Is Livid took the field of 11 through fractions of 24.09 seconds, 50.17 and 1:02.89, Monkeys Uncle was steered to the outside by Centeno rounding the far turn and remained wide to make her winning run, catching Margie Is Livid in mid-stretch and turning away Shoobiedoobydo to the inside.

Monkeys Uncle was cutting back from her debut victory under Centeno going a mile and 70 yards Aug. 30 at Delaware Park.