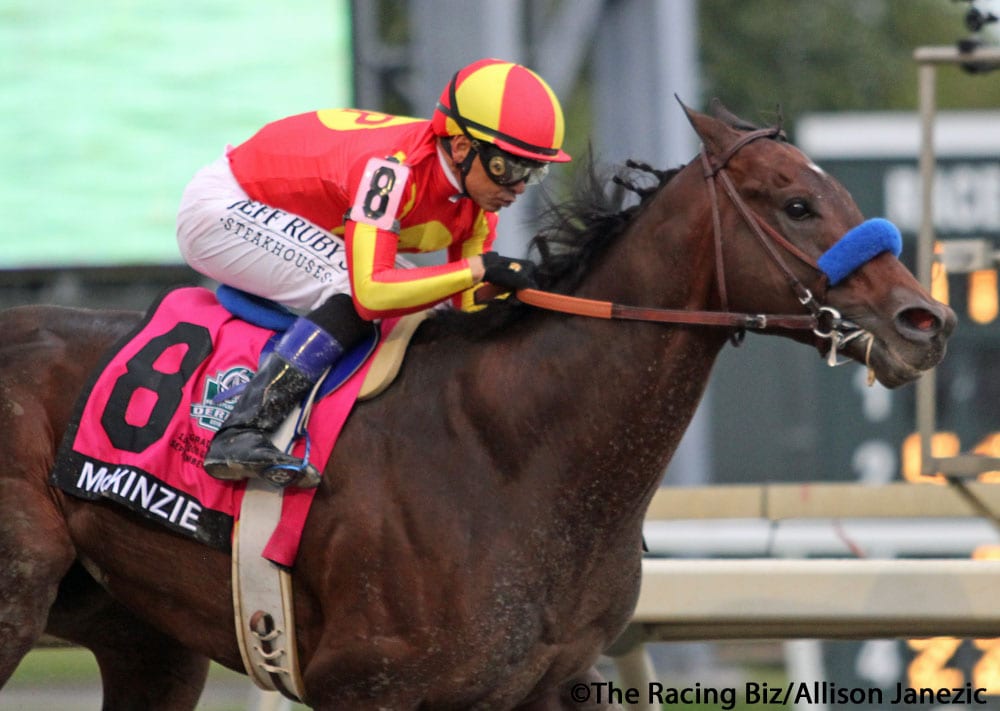 McKinzie’s back. And now a three-year-old division that three months ago was the property of Justify is as wide-open as could be.

Making his first start since March 10, McKinzie, a Street Sense colt trained by Bob Baffert, pressed the early pace while outside, led into the stretch, turned away a challenge from Axelrod, and inched away to win by 1 3/4 lengths in the Grade 1, $1 million Pennsylvania Derby. Axelrod held second, a couple of lengths clear of Trigger Warning in third.

McKinzie has now crossed the wire first in all five of his career starts, though only four of them count as wins. He finished first in the Grade 2 San Felipe but was disqualified and placed second, behind Bolt d’Oro. His wins include the Grade 1 Los Alamitos Cash Call Futurity and the Grade 3 Sham.

Trigger Warning and jockey Irwin Rosendo made the early running through a modest opening half-mile in 48.91 seconds with McKinzie and Mike Smith looming the main threat. Trigger Warning couldn’t keep the pace — though he did hang around for third, albeit seven lengths behind Axelrod — when Axelrod came to test McKinzie.

Other notables in the field included Hofburg (5-2, finished fourth) and Bravazo (9-2, seventh).

Photo of McKinzie by Allison Janezic.

ALSO ON THE CARD

Favored Firenze Fire, trained by Jason Servis for Mr. Amore Stable, won the G3 Gallant Bob for three-year-olds by a neck in a long battle with Whereshetoldmetogo, who savaged his rival to no avail. Running time for the six furlongs on a fast main track was 1:11.27. It was the fourth graded stakes win of Firenze Fire’s career and pushed his career earnings past the $1 million mark… Aztec Sense posted a four-length, front-running score in the $150,000 Pennsylvania Derby Champion Stakes for three-year-olds and up… Favored Fast and Accurate rallied to win the Alphabet Soup for PA-breds…