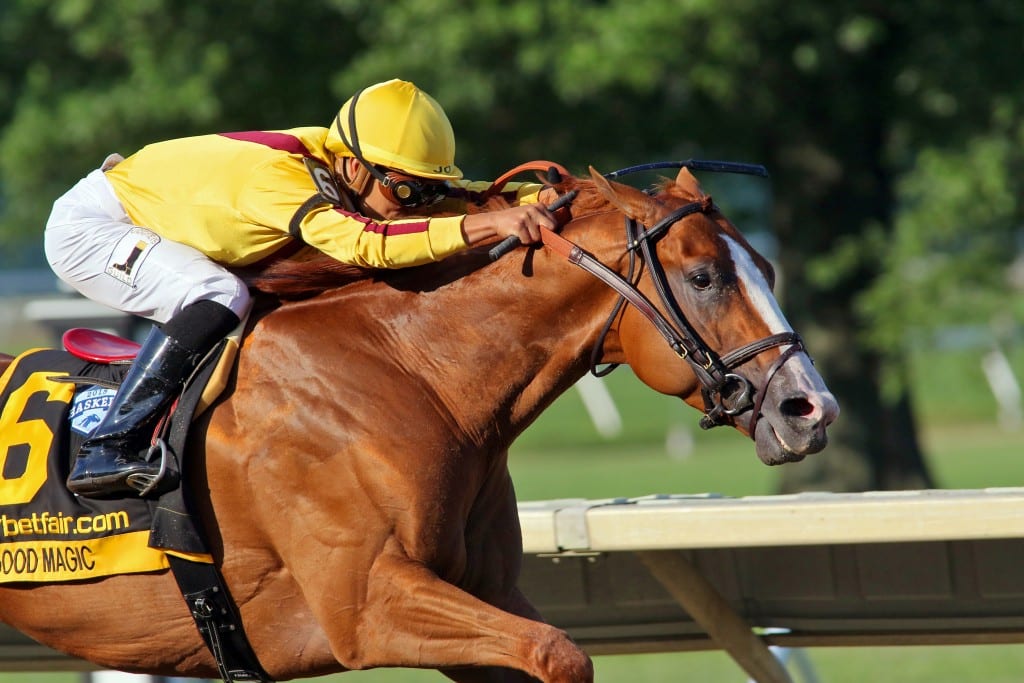 The skeptics have been silenced, the last doubters driven off. The lingering questions linger no more, and even in a room full of naysayers, the ayes have it.

It’s Chad Brown’s racing world, and the rest of us are just living in it.

He doesn’t have the the volume of Asmussen, or the Triple Crowns of Baffert. But he seemingly has a barn full of graded stakes-quality horses, and he has more graded stakes victories this year — 21 entering the day — than any other trainer in the country.

And now, with the retirement of Triple Crown hero Justify, Brown might have the best three-year-old still in training.

Good Magic made his case to assume that mantle Sunday afternoon with a flashy victory in the $1 million, Grade 1 Haskell Invitational at Monmouth Park. It was Brown’s second graded win of the day at Monmouth — his Elysea’s World and Dream Awhile ran one-two, respectively, in the Grade 3 WinStar Matchmaker — and more importantly, made clear that any sophomore seeking the “best three-year-old in training” title will have to wrest it away from the chestnut Curlin colt.

When last seen, Good Magic had engaged Justify in a spirited racelong duel on the front end of the Grade 1 Preakness Stakes in the Pimlico slop. When the dust — err, mud — had settled, Justify was a length better than Good Magic, who ended up fourth as the closers Tenfold and Bravazo swept up to occupy the show and place spots, respectively.

But that was then, and this, of course, was now. Both Tenfold and Bravazo tried their hands again in the Belmont Stakes, neither making much impact. From there Tenfold took a bland renewal of the Grade 2 Jim Dandy on Saturday — he earned a Beyer speed figure of 93 in victory — while Bravazo aimed at the Haskell.

Brown, taking his time, skipped the Belmont and trained Good Magic towards the Haskell. He showed a half-dozen recorded works leading up to the race, including a zippy half-mile in 48 2/5 seconds on July 21.

“He was training really well coming into the race,” Brown said afterwards. “Every week he got stronger.”

Brown, who trains Good Magic for a partnerships that includes e Five Racing Thoroughbreds and Stonestreet Stables LLC, had been critical of jockey Jose Ortiz’s tactics in the Preakness aftermath, arguing that engaging Justify in the early running amounted to a suicide mission.

But there was no such formidable rival in the Haskell, and while the Kelly Breen trainee Roaming Union shot to the early lead under Albin Jimenez, Ortiz quickly steered Good Magic into a good stalking position, a couple of lengths behind the leader, who was 45-1 at post time, while removed from the rail and by himself.

“We got into a good position, and he relaxed really well,” Ortiz said.

They continued like that, with Bravazo on the chase another couple of lengths behind Good Magic, through the opening half-mile in 46.83 seconds. Nearing the far turn, Good Magic began on his own to turn up the heat on Roaming Union. By the quarter pole, he was in command.

“When I asked him to go getting to the three-eighths pole, he really responded,” Ortiz said.

Good Magic opened up a four-length advantage leaving the furlong grounds over the hard-working Bravazo and ultimately cruised home three clear of that rival. It was another six back to Lone Sailor in third. Running time for the nine furlongs was 1:50.01 — slightly slower than the 1:49.56 of the Grade 3 Monmouth Cup for older runners earlier on the card. Good Magic paid $3.00 to win as the 1-2 favorite and topped an exacta, with second choice Bravazo underneath, that returned just $4.70 for a buck.

It was the third win of Good Magic’s eight-race career, and it bumped his earnings to more than $2.9 million. He won last year’s Grade 1 Breeders’ Cup Juvenile after entering the race as a maiden, and that win earned him the Eclipse Award as champion juvenile. All three of his wins have come in graded company.

He is among the favorites in futures wagering for the Breeders’ Cup Classic this fall, but Brown said he has a more near-term goal in mind.

“I’d love to go to the Travers with this horse,” he said, though he hastened to add that he would let the horse, and his condition, determine whether he would next run in the Midsummer Derby or another race.

Ortiz, for one, seems to think Good Magic is ready for the next steps, whatever they may be.

“He’s much stronger, much mature, and I think it’s going to help him in the future,” he said.