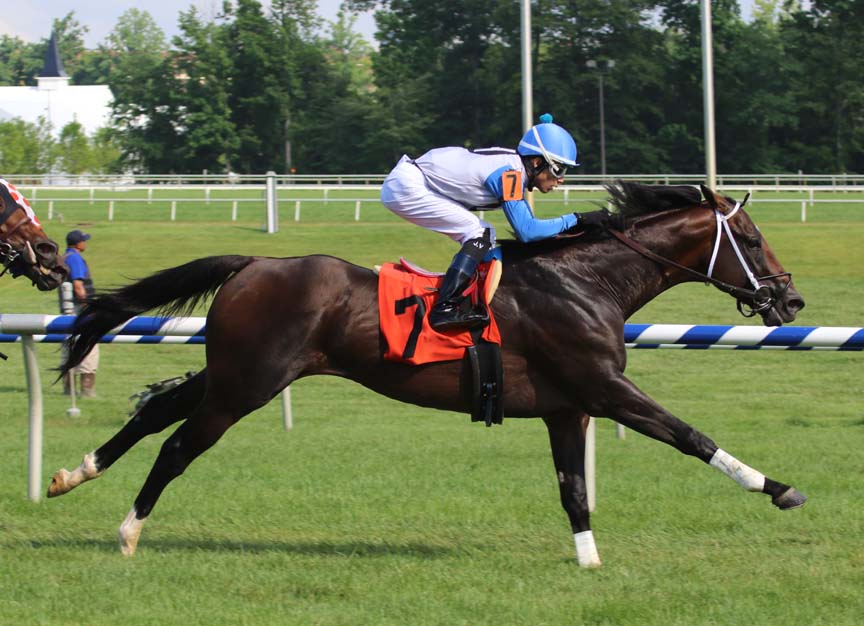 Sticksstatelydude, the winner of the $75,000 Edward P. Evans Stakes at Laurel Park Saturday, part of the Virginia-bred series of races, wasn’t bred by Budweiser, exactly. But it might feel that way.

Jockey Jorge Vargas, Jr. and Sticksstatelydude kicked clear at the top of the lane to win the Evans by a length after being floated out in the first turn. The 5-year-old is trained by Kiaran McLaughlin and owned by a group comprised of Alvin Haynes, John Ferris, Pack Pride Racing, M. Hayes and Brad Ward.

It was the latest stop in Sticksstatelydude’s well-traveled career, a journey that began even before he was born, said Glenn Eickhoff, who with his wife Roxanne operates Canyon Lake Thoroughbreds, located just north of Front Royal, Virginia.

“We moved up from Florida when he was in utero and brought the mare (Placerita, by Gilded Time) with us here, and it just worked out that he was foaled in Virginia and we’re very happy that he was,” explained Eickhoff standing in a crowded winner’s circle postrace.

Sticksstatelydude was sired by First Dude out of that aforementioned mare, Placerita by Gilded Time.

Though Canyon Lake Thoroughbred may not be nationally known, it’s likely that a group of horses that Glenn Eickhoff managed for 28 years may be familiar to you: the Budweiser Clydesdales.

“It was a crazy job. We were all over the county, somewhere different every week. It was a great job. It certainly helped fund my thoroughbred interest. That’s for sure,” recalled Eickhoff. “One of the good things is that I got to see every racetrack in the country traveling that way.”

The handling of thoroughbreds and of Clydesdales is quite different according to Eickhoff.

“They’re very different, very laid back, easy going,” explained Eickhoff, of the Clydesdales. “They were a corporate symbol for Budweiser and still are to a smaller scale. I worked on racetracks and breeding farms. That’s was always my first love.”

Eickhouff still works for one of the daughters of the Busch family and still has some of the retired Clydesdales on the farm.

Sticksstatelydude was once under consideration for the Breeders’ Cup Juvenile, and the next year after winning the $150,000 Discovery Handicap (G3) at Aqueduct was a candidate in for initial running of the Pegasus until a strained tendon forced a mandatory vacation from racing.

Today’s victory was the horse’s first in seven starts this year, fourth in 17 starts overall, and gave him more than $400,000 in earnings.

NOTES Trainer Arnaud Delacour then an assistant, was sent years back by Christophe Clement with a small stable to Colonial Downs where he met the late Nellie Mae Cox. When Delacour struck out on his own, Cox was one of the first owners Delacour trained for. Saturday afternoon, his pupil Armoire won the race named in her honor, the $75,000 Nellie Mae Cox.