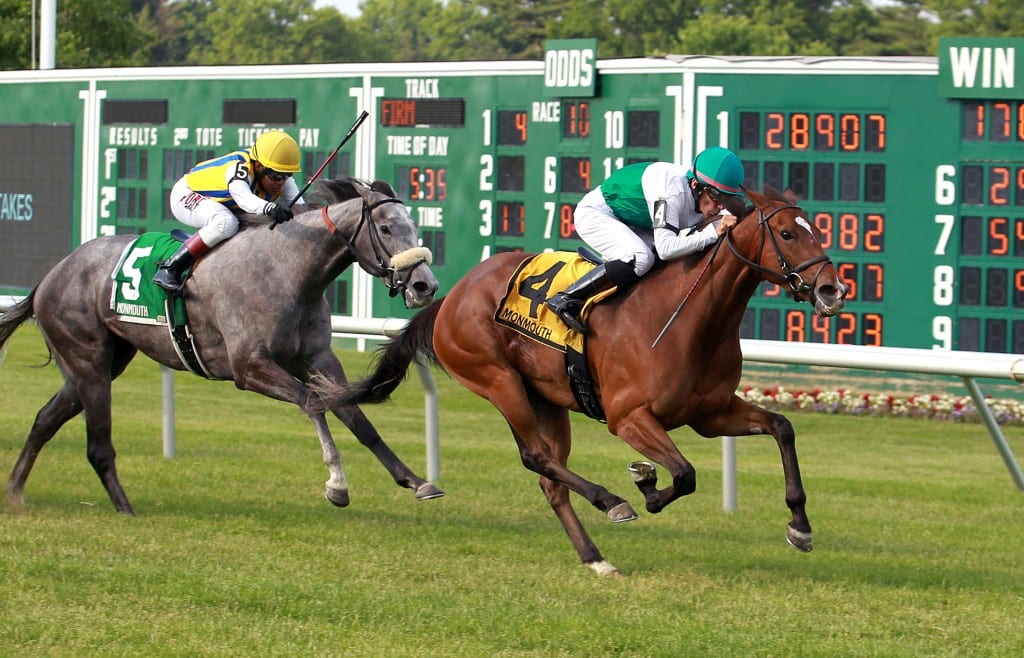 Lift Up shook loose from behind a wall of three horses in mid-stretch and powered to 1¼-length victory in the featured $75,000 Miss Liberty Stakes at Monmouth Park on Saturday to improve to 5-for-5 on the turf.

The homebred 4-year-old daughter of Ghostzapper-Dynamic Cat earned her first stakes victory by surging past longshot Viva Vegas, who appeared to shake loose and looked to be on her way to an upset victory.

“She’s a cagey little horse,” said winning jockey Mario Pino. “I know her because I rode her last time. She has a really good run, an eighth of a mile that is really quick. As long as I could keep her covered up I was fine, but I didn’t want to be that covered up. In the end it worked out fine.”

Trained by Michael Dickinson, Lift Up now has a 5-2-1 line from nine career starts and is unbeaten in both of her starts this year. She has won five of six.

She covered the mile and a sixteenth over a firm turf course in 1:41.09.

It was another three-quarters of a length back to Party Boat in third.

“We keep giving her more and more to see how good she is,” said Dickinson. “She’s a late developer and she’s going to be even better. We haven’t seen the best of her yet. She’s a stayer but she can turn it on. That’s a lethal combination.”

Owned by George Strawbridge Jr.’s Augustin Stable, Lift Up returned $8.20 to win in the field of eight fillies. The exacta with Viva Vegas paid $98.20.

Lift Up lagged behind the field early and was still fourth in mid stretch when Viva Vegas looked to make a winning move before eventually being collared and passed.