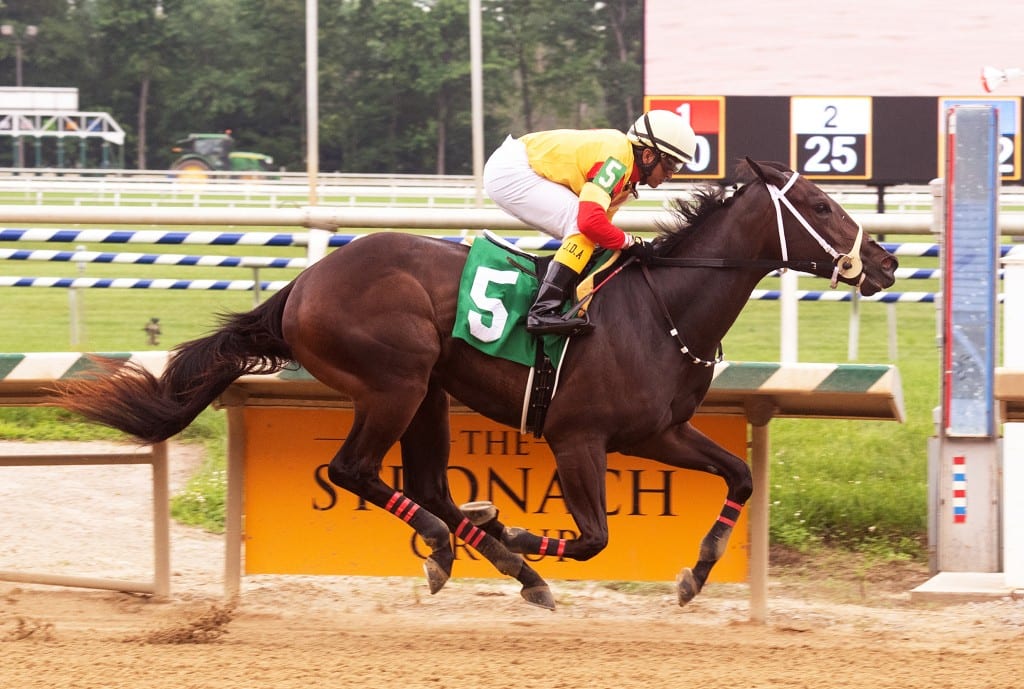 “Lost my voice screaming at the TV the other day,” trainer Cal Lynch said Sunday afternoon at Laurel Park. “I can’t even talk. This is the most I’ve talked in days.”

Lynch has had what you might call a pretty good weekend.

On Friday, he sent out Our Braintrust to a 10-1 upset in the $150,000 Tremont Stakes for two-year-olds at Belmont Park — that’s the one that necessitated the screaming. On Saturday, his trainee Dancingwithpaynter, a three-year-old Paynter filly, broke her maiden in maiden special weight company at Laurel Park.

And then Sunday, Congrats Gal, a two-year-old filly he trains for Charles Biggs — a longtime owner of Lynch’s who also owns Dancingwithpaynter — registered a flashy six-length score in a five-furlong baby race at Laurel to complete the hat trick.

“This filly here’s very nice,” Lynch commented after the race. “She’s one of maybe five babies in the barn that we’re very excited about.”

A $57,000 purchase in April at the Ocala Breeders Sale, Congrats Gal is out of the multiple-graded stakes-placed Elusive Quality mare G City Gal. She worked a furlong at that sale in 10 1/5 seconds and is a half to a 14-time winner.

That all prompted Lynch’s wife Daniela to submit the winning bid of $57,000 — $7,000 above Biggs’s typical ceiling, Lynch said.

It seems like that may prove to be a smart move on the owner’s part. She entered Sunday’s race with three works on the page since coming to Lynch’s Laurel Park barn. The last of those, on Thursday, was a snappy half-mile in 48 1/5 seconds from the gate.

In today’s contest, Congrats Gal was hustled out of the gate by jockey J. D. Acosta and quickly established a clear lead, zipping the opening quarter-mile in 22.58 seconds.

The favorite, Pink Notion, made a run at her leaving the quarter-pole, but Congrats Gal spurted clear again and went on to win the race easily in 58.77 seconds. Ask the Customer, another firster, rallied late for the place spot, while Pink Notion settled for third.

Congrats Gal, the third choice in the field of seven, paid $8.60 to win and topped a $1 exacta worth $18.80. While there typically aren’t many options for two-year-old winners at this time of year — “It’s usually always stakes,” Lynch said — the trainer allowed that he might go seeking big game with her.

One of the other capable runners in the Lynch barn, Our Braintrust, was doing well following his Tremont win. In the Tremont, he slipped through inside to win by three parts of a length in the 5 1/2 furlong event and improve to two-for-two in his brief career.

Lynch co-owns Our Braintrust in partnership with Stanton J. “Bo” Smith. They purchased the Maryland-bred Freud colt for $25,000 at the 2017 Fasig-Tipton fall yearling sale.

Smith owned the New Jersey-bred Outflanker gelding Javerre, who earned over $490,000 and provided Lynch with his first graded stakes win, in the 2013 Grade 3 General George at Laurel Park. Javerre now serves as a stable pony in Lynch’s barn.

While Congrats Gal is a speedball, Our Braintrust looks likely to be more of a two-turn horse.

Lynch said he and Smith have fielded offers for Our Braintrust but are having plenty of fun with him as is. He’s by a New York sire, which opens up options up north, and was bred in Maryland, which provides opportunities at home.

“This is the first horse him and I have owned together in a long time, and I’ve trained for him 22, 23 years,” Lynch said. “He was one of my first owners here, so, unless he wants to sell, I’ll do whatever Bo wants.”