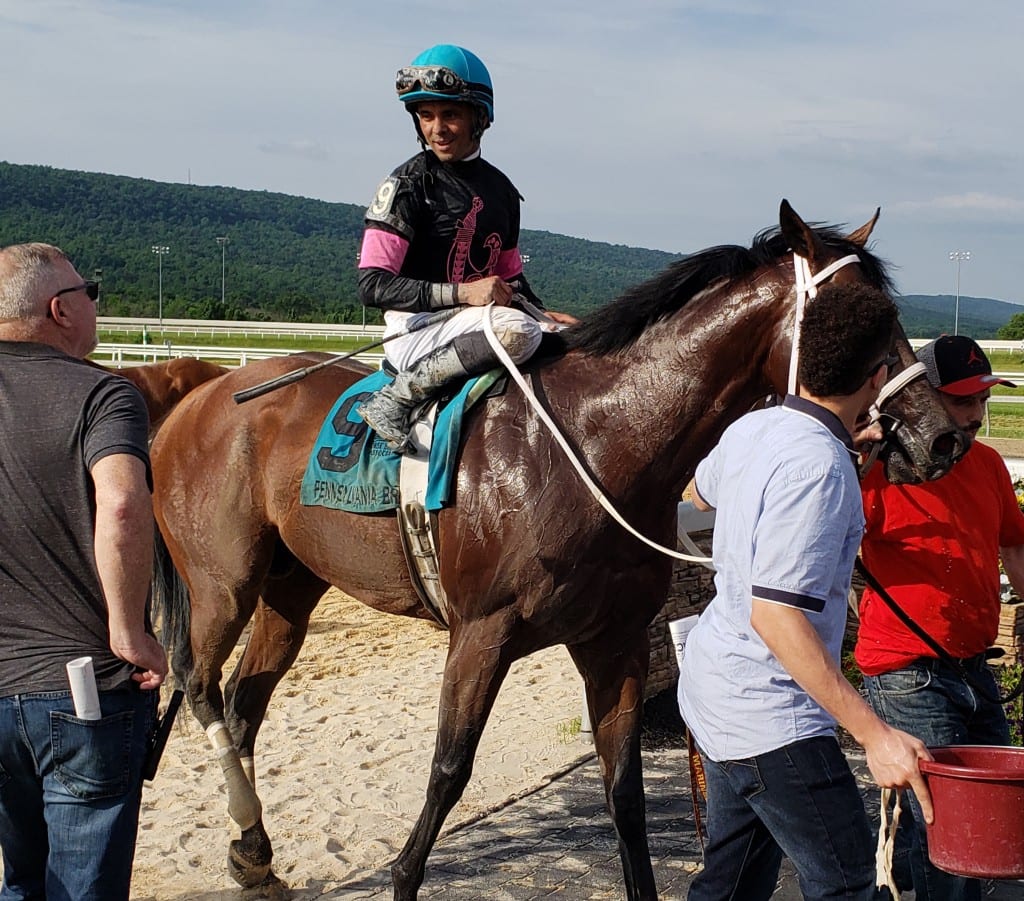 Smooth B. Photo by The Racing Biz.

In an event with three undefeated horses — including the four-for-four John Servis trainee Midnight Poker — it was a getting-good-right-now horse that got the money in the $100,000 Danzig Stakes for three-year-old Pennsylvania-breds Saturday evening at Penn National.

With Jose Lezcano in the irons, Smooth B slipped through along the rail in the stretch before drawing away to win by three lengths over the favored Midnight Poker. That rival held second by a little less than a length over Tudox Expectations. Running time for the six furlongs on a fast main track was 1:11.21.

“I guess the blinkers were the answer, it looks like,” said winning trainer Robert “Butch” Reid. “Really woke him up.”

Reid put the blinks on the son of Weigelia for his most recent tilt, a May 15 allowance at Parx Racing, and was rewarded with a nine-length score and a career-best Beyer speed figure of 92. That topped his previous best of 71.

“I knew he had a lot more talent than he was letting on,” Reid explained. “You got to start trying things, you know? Not a stab in the dark, but the blinkers are an easy thing to do right away, and it seems to be the answer.”

It was the fourth win of Smooth B’s career and first in stakes company. It also pushed his lifetime earnings past $170,000. Reid trains him for LC Racing. He was bred by St. Omer’s Farm and WynOaks Farm LLC.

The versatile Smooth B now owns wins at distances from five furlongs to one mile and also has run credibly on the turf.

“His big sister won a couple of stakes on the grass,” Reid said, “so maybe grass is in his future, too. There’s a 3-year-old, PA-bred, long on the turf in about a month or six weeks, so that might be the next thing on his agenda.”

Bronx Beauty improved to three-for-three at Penn National with a front-running score in the $100,000 New Start Stakes for Pennsylvania-bred fillies.

Under John Velazquez, Bronx Beauty dueled early with 8-5 favorite Violent Times before putting away that rival and drawing off to win by two lengths over late-arriving Smokinpaddylassie. Running time for the six furlongs over a fast main track was 1:10.35.

Bronx Beauty, by Liaison, was bred by Blackstone Farm LLC and is trained by Anthony Margotta for 2W Stables LLC.

Imply bounded clear late to score a modest upset in the $100,000 Lyphard Stakes for state-bred fillies and mares three and up on the turf. Running time for the 1 1/16 miles over a track rated firm was 1:41.69.

Imply, trained by Bernie Houghton for Barlar LLC, was second a neck in this event one year ago and earned the third stakes win of her career in this event. With Julio Hernandez up, Imply came outside the 7-10 favorite, Great Soul, to win by 1 1/2 lengths, with her entry-mate, Advert, along in third.