Preakness Past: Oxbow, spoiler – and maker – of dreams 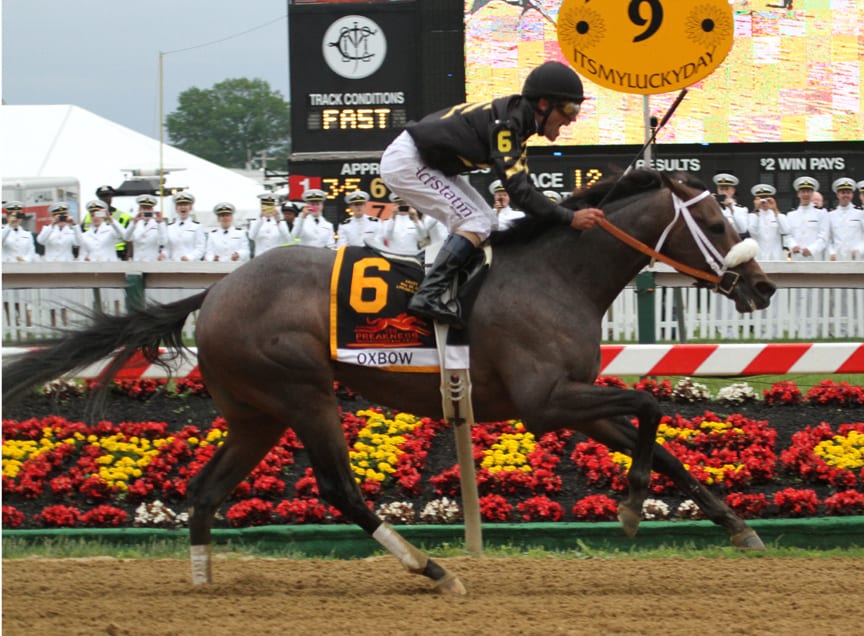 Our 2018 Ghosts of Preakness Past will feature stories of eight editions of the Preakness from the last 40 years. Today, 2008 and Oxbox, who brought two titans of the sport back its pinnacle.

In 2013, Hall of Fame jockey, Gary Stevens, came out of his seven-year retirement at the age of 50. It was a daring move, but the sport was calling out to Stevens in a way that he couldn’t ignore. He decided that his time in the spotlight wasn’t over, and his ride through the 138th Preakness Stakes would validate that the legendary rider truly belonged back in the saddle.

Stevens teamed up with fellow Hall of Famer D. Wayne Lukas to ride the Calumet Farm-owned Oxbow, in the Kentucky Derby. Twenty-five years before, the pair had teamed up to win the Derby with the filly Winning Colors, in front-running fashion.

However, this time around, their horse could do no better than sixth in the “Run for the Roses,” part of an early pace that left the early speed types, including Oxbow, gasping for breath as the late runners, most prominently Orb, came running.

Oxbow’s loss in Kentucky did little to shake the faith of his connections, and it was off to the Preakness Stakes for the son of Awesome Again. The main focus leading up to the race surrounded Kentucky Derby champion, Orb, but the moment the starting gates flew open in the Preakness, it would be Oxbow who would outrun the field, and his 15-1 odds.

Without hesitation, Oxbow seized the moment and shot out of the gate like a rocket. The colt boldly fired to the front and began steadily kicking through one furlong after the other, doling out moderate fractions while by himself in front.

As Oxbow rounded the final bend, it became clear that the fractions he set had taken little out of him. He roared strongly into the stretch, ready to finish what he started. Far behind, Orb made a middle move but failed to rally in the stretch, leaving all eyes on the runaway Oxbow. Itsmyluckyday and Mylute gave chase down the lane, trying desperately to reel him in, but Oxbow stubbornly repelled the challenge and kicked away. Oxbow bounded to a 1 3/4 length victory, ending any chance of Orb making the Triple Crown reality.

“I came into the stretch so loaded,” Stevens told The Baltimore Sun. “I couldn’t believe that no one challenged me going into the far turn, but when no one did, I said, ‘I think everybody’s in trouble right now.’”

While fans of the sport were disappointed to see that the Triple Crown would not be on the line in 2013, the day didn’t end without history being made. When Oxbow dashed over the finish line in front, he gave Calumet Farm its record eighth Preakness win, and Lukas his 14th win in a Triple Crown race, putting him ahead of “Sunny Jim” Fitzsimmons, as the most winningest trainer in the Triple Crown series. It was also Lukas’ sixth Preakness triumph.

“I get paid to spoil dreams,” the 77-year-old Lukas told The Baltimore Sun, in the wake of his stunning upset. “The thing about it is, you get up every day and look for that one thing that you maybe can do something with. As long as we’ve got something to work with, we’re going to be around.”

Oxbow ran a gallant second in the Belmont Stakes three weeks after his shocking score in Maryland. He then finished fourth in the Haskell Invitational before heading off to stud at Taylor Made in Nicholasville, KY; he now is back home at Calumet. The colt retired with three wins and two seconds out of thirteen career starts, and recorded a total of $1,243,500 in earnings. And while he may have only visited the winner’s circle a small handful of times, on the third Saturday in May 2013, he helped a 50-year-old jockey and a 77-year-old trainer return to the pinnacle of a sport they’d once ruled together.