Mario Pino to shift tack to Delaware for 2018

Mario Pino, tenth on the all-time list for wins by a jockey in North America with nearly 6,900 victories, plans to return home to Delaware Park, where his remarkable career began nearly four decades ago. The 56-year-old native of Wilmington, Delaware, will be riding full-time at the Stanton oval, when the meet opens on May 30th.

“I am really excited about coming back to Delaware,” said Pino, who was the leading rider at Delaware Park in 1979 and 1980. “I love riding on the track, I love the people and I love the family atmosphere. I have a great history and fond memories. Through the decades I rode plenty of really good horses including Jameela, Sportin’ Life and Hard Spun. I am really looking forward to this opportunity.” 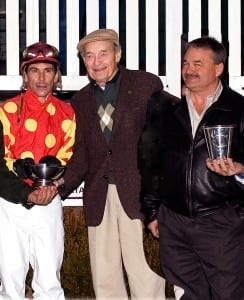 Pino notched his first career victory at the now-defunct Bowie Racecourse in Maryland on January 16, 1979. He rode Jameela in 1979 and Sportin’ Life in 1982 to multiple victories at Delaware Park. He ranked in the top five among Maryland jockeys from 1979 through 2003 and was the leading rider in Maryland in 1999 and 2002. He moved his tack back to Delaware Park from 2004 through 2008, and finished in the top 10 each season. While at Delaware in his second stint, he teamed up with trainer J. Larry Jones. The pair gained national recognition in 2007 when Hard Spun, who broke his maiden the year before at Delaware Park, ran second in the Kentucky Derby, third in the Preakness Stakes and second in the Breeders’ Cup Classic, and won the King’s Bishop Stakes at Saratoga.

More recently, Pino has been spending his summers at Presque Isle Downs in Erie, Pennsylvania, where he finished second in the standings last year, third in 2016 and fourth in 2015. But family and nostalgia are pulling him back to the mid-Atlantic region.

“Presque Isle has been very good to me, but I think it is time for a change,” Pino said. “I have enjoyed a lot of success riding there, but I am being drawn back to Delaware. I am looking forward to getting back to be closer to my family. My mother still lives in Newark, Delaware, my two brothers live in Pennsylvania and my three daughters still live in Maryland, so I am also looking forward to being closer to them.”

So far this year, Pino has only ridden five horses—with a win, a second and a third, all at Gulfstream Park—but that was by design and is a secret to his longevity.

“I am blessed to be in really good health,” Pino said. “I have been keeping myself fit and getting on horses in the morning, but I have only ridden five horses this year because I like to take off during the winter. I try not to ride for about four to five months and, about a month before I get back to riding on a full-time basis, I turn everything up a notch.”

The 81st season of live racing at the Stanton oval will feature 81 days, with the meet starting on May 30 and concluding on October 20. Live racing will be conducted Saturday, Monday, Wednesday and Thursday. The final week of the meet live racing will only be conducted on Wednesday and Saturday. Delaware Oaks Day is slated for July 7 and Delaware Handicap Day is July 14. The first race post time is set for 1:15 p.m.