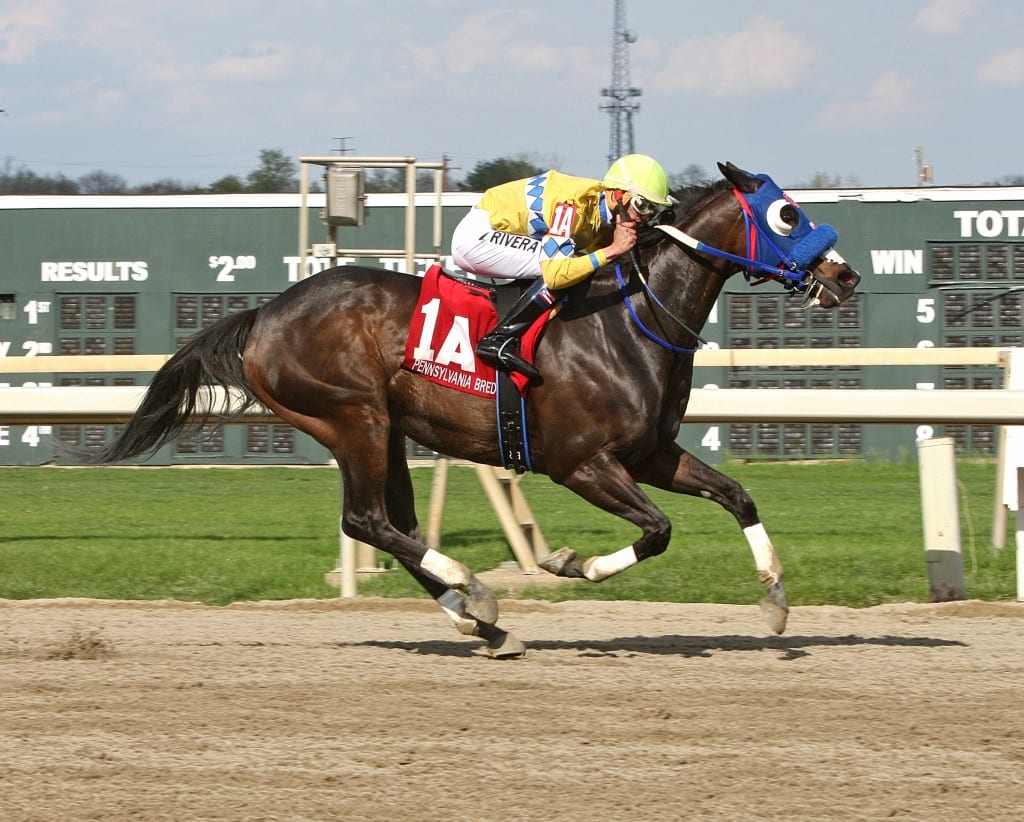 Grasshoppin cruised to a win in the Lyman Stakes at Parx Racing. Photo By Barbara Weidl/EQUI-PHOTO.

A month after being named Pennsylvania’s horse of the year following his perfect six-for-six showing in 2017, The Man made his 2018 debut in the seven-furlong Lyman Stakes for Pennsylvania-breds at Parx Racing April 28.

But though he went off as the 8-5 post time favorite, The Man had no answers in the $100,000 test, finishing fifth, while Grasshoppin, the third choice in the field of seven, cruised to a three-length victory in 1:24.25 over a fast main track. It was the first stakes win for the seven-year-old Grasshoppin, a Cat Thief gelding, and came in his 42nd career start.

In the day’s other Pennsylvania-bred stake, the $100,000 Foxy J. G. for fillies and mares three and up, even-money choice Power of Snunner was up late to win by a neck after rallying from last.

With Edwin Rivera up, Grasshoppin broke sharply and led Cowboy Mz by a head after a quarter mile in 23.23 seconds and a half in 45.65. Cowboy Mz began to fade soon thereafter — he finished sixth — while Grasshoppin drew away to the win. Driven to Compete held second, and Red Razzo rallied into third.

Grasshoppin is owned by his breeder, Michael Jester, and trained by Claudio Gonzalez. He now has nine wins from 42 career starts, and the winner’s share pushed his career earnings past the half-million dollar mark.

For Power of Snunner, who managed the seven-furlong distance in 1:25.32, the win in her season debut was the tenth victory of her career and her fourth in stakes company. It was also her second in this event, which she previously won in 2015. Power of Snunner’s has now earned $636,310 in her 35-race career.

The daughter of Power by Far closed along the outside under jockey Dana Whitney to get the money for owner-breeder James Courtney and trainer Tim Kreiser.