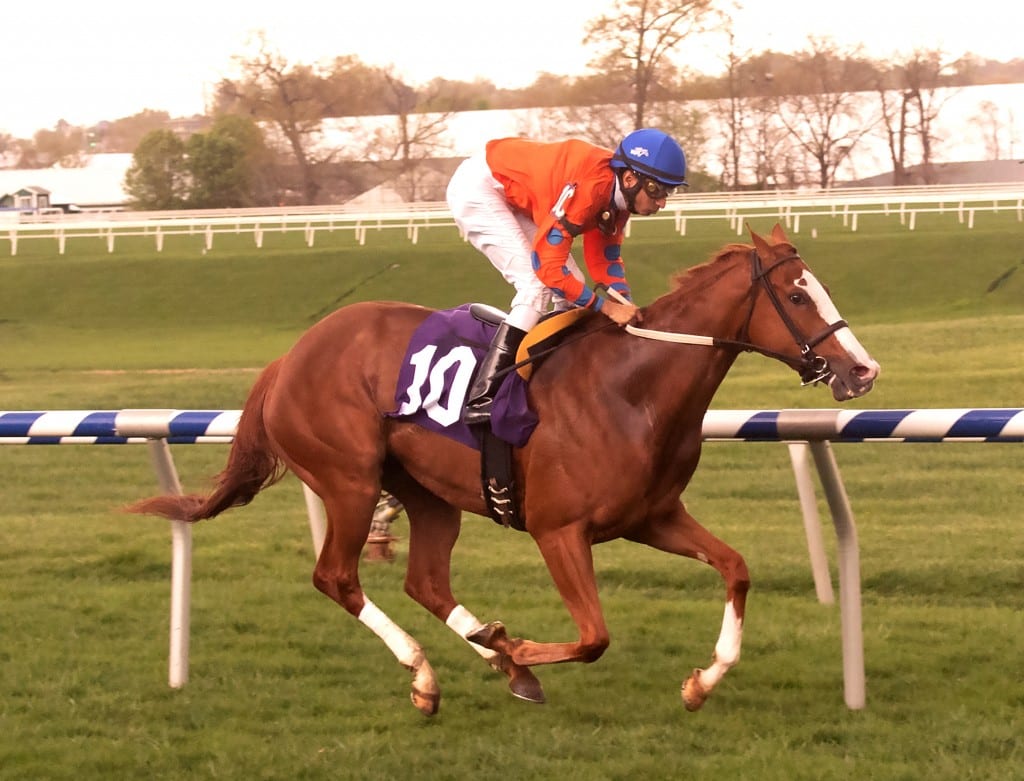 One day after 2017 Maryland-bred Horse of the Year Just Howard recorded his sixth work in preparation for his season debut — likely in the Grade 2 Dixie at Pimlico May 19 — his little sis joined the ranks of winners April 28 at Laurel Park.

And just like her big brother, all Monte Crista needed was a chance on the turf.

“You could blow me over with a feather,” said Mike Pons, whose Country Life Farm manages the ownership partnership. “This filly is bred for the grass. It’s the first time we got her on it.”

Under veteran jockey Julian Pimentel, Monte Crista, a daughter of Cape Blanco, enjoyed an ideal pace-pressing trip early, took the lead on the far turn, and surged home to a facile 4 1/4-length victory. She stopped the timer in 1:47.02 over a slow-playing turf course rated good, and she returned a generous $37.60 to her backers.

“I thought in this field, we’d be lucky to hit the board,” a jubilant Pons said in the winner’s circle.

And indeed, it was an intriguing group that faced the starter. Among her nine rivals were Keepupthemessage, a half-sister to Grade 1 winner Long On Value; Isoclone, a full sister to multiple graded stakes winner Isotherm; and Myth Creation, a More Than Ready filly out of a stakes-winning Sahm mare. And that’s to say nothing of the favorite, the Cal Lynch trainee Dancingwithpaynter, who’d finished in the triple in all three grass starts.

Yet all were left in the wake of Monte Crista.

It marked an impressive reversal of fortune for a filly whose March 24 debut — sprinting on the dirt — had resulted in a distant seventh-place finish, a result somewhat flattered when the winner, the talented Goodonehoney, returned to win the Weber City Miss Stakes April 21 at Laurel Park.

It took Just Howard, an English Channel colt, until May 29 of his three-year-old season to break his maiden. But that victory kicked off a four-race winning streak, which included three stakes, among them the Grade 3 Commonwealth Derby.

Like Just Howard, Monte Crista is out of the Alphabet Soup mare Aruban Sandwich and is among the final products of the stellar breeding operation of the late Howard and Sondra Bender, which was managed by their longtime trainer Larry Murray.

“Larry said, ‘You get her on the grass, and be patient with her, and you might be rewarded,'” Pons said. “Thank you, Larry and Mr. Bender and Sondra. They were great for Maryland racing and good friends.”

Of course, whether Monte Crista’s future holds as much promise as Just Howard’s remains to be seen.

But, Pons said, “What did Dad say? Nobody ever jumped in the river with a good young horse in the barn, so everybody’s safe tonight.”

NOTES Monte Crista’s win came in one of three maiden special weight tests on the day at Laurel Park, with the others two divisions of a six-furlong, dirt race for three-year-old fillies. In the first of them, Words of a Feather cruised to a five-length win in 1:12.94 for six furlongs.

In the second, Sower, a Linda Rice-trained Flatter filly making her career debut, dazzled with a seven-length win in 1:10.51.

“She’s got power,” said winning rider Horacio Karamanos. “You don’t know what is the top. First time, she did everything perfect. She’s got a lot of class.”