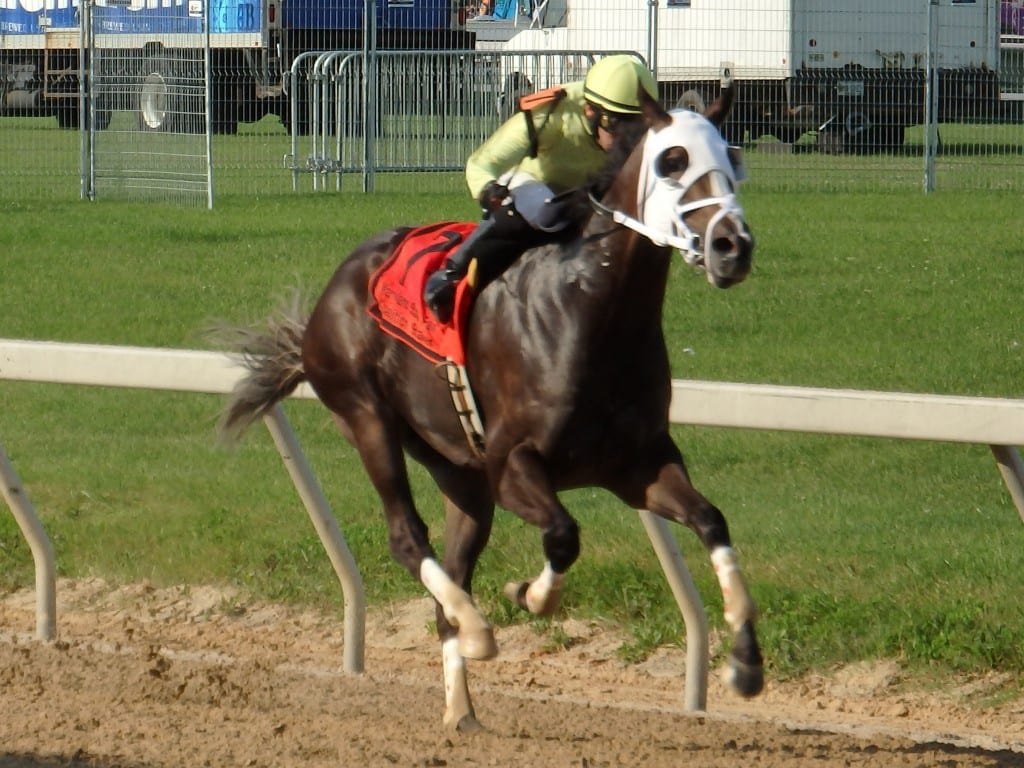 That, in essence, was the question brought to the Maryland Racing Commission today by Attorney Alan Pincus, representing Robert L. Cole, Jr. and Kevin Patterson, owner and trainer, respectively, of Blu Moon Ace.

The Commission’s answer, delivered after a 90-minute hearing and 10 additional minutes of deliberation: it certainly was a positive in the case of Blu Moon Ace.

The case arose following the September 16, 2017 running of the Grade 3, $250,000 Frank J. De Francis Memorial Dash at Laurel Park, when Blu Moon Ace, a near-miss second in the test, came back with an overage of cobalt found by Truesdail Laboratories, the state’s testing lab.

Cobalt, an element that is naturally occurring in horses, helps the body to produce enzymes like thyroxine and assists in the production of hemoglobin.  Increased levels of cobalt can enhance equine performance, many believe.

Maryland regulations permit cobalt up to 25 nanograms per milliliter (also known as parts per billion) of blood plasma or serum, but Blu Moon Ace came back on the initial test at 53.9 nanograms, plus or minus 7.9. Patterson admitted having provided his horse feed and supplements that contained small amounts of cobalt — an element he said he knew nothing about prior to this incident. A split sample test conducted by the Analytical Toxicology Lab confirmed the initial finding, registering Blu Moon Ace’s cobalt level at 58 ppb, +/- 1.

So far, so good, but here’s where it gets tricky.

While Maryland’s rule is fairly straightforward – above 25 is a positive, below is not – the stewards used the Association of Racing Commissioners International’s (ARCI) three-tiered model rule in handing out their penalties, according to administrative steward Adam Campola.

Under the ARCI guidelines, below 25 is not a violation – same as in Maryland. From 25 to 50 parts per billion, the recommended penalty is a light one, merely a written warning to the trainer and placement of the horse on the vets’ list until his cobalt level tests below 25 ppb.

Above 50 parts per billion: that gets the trainer a $500 fine, 15-day suspension, and two points on the multiple medication violation system, and hits the owner with disqualification and its attendant loss of purse and placement of the horse on the vets’ list.

Since the stewards employed the ARCI guidelines in determining the penalty to levy, it raises a question: Was Blu Moon Ace’s cobalt level – 53.9 parts per billion, plus or minus 7.9 – above 50? If so, that would mean disqualification and the loss of the $50,000 runner-up’s share of the purse. If not, nothing more than a slap on the wrist.

According to Dr. Thomas Tobin, a professor of veterinary science at the University of Kentucky and also a recognized expert in toxicology and pharmacology who testified on behalf of Cole and Patterson, 53.9 parts per billion was the mean concentration of the drug found after numerous tests. And +/- 7.9 set the bounds for the range of values in those tests, thus measuring the uncertainty.

“There’s a strong statistical possibility that it’s below 50,” Tobin told the Commission, in testimony delivered by phone.

And that, said Pincus, meant that the Commission quite simply could not prove that the level of cobalt in Blu Moon Ace’s system exceeded the 50 ppb threshold which would spur a disqualification. It needed to assess penalties for a positive in the 25-50 parts per billion range, he said, not the 50 and up range. In fact, he pointed out that the Racing Medication and Testing Consortium (RMTC) and ARCI guidelines for laboratories state that labs shouldn’t call a positive if the range of values in a finding includes values below the threshold.

But Catherine Bellinger, assistant attorney general representing the stewards, argued that that would be tantamount to ignoring the rules.

“We have threshold limits for a reason,” she told the Commission. “For each drug you can’t go through and just say we should have some flexibility.”

She pointed out that Maryland rules do not contain the three-tier system outlined by ARCI and that the stewards have the authority to order the disqualification of a horse found to have violated the state’s 25 ppb threshold.

What’s more, she pointed out, a split sample requested by Cole and Patterson not only confirmed the initial finding – but it found a slightly higher concentration, of 58 ppb +/- 1, with no values below the threshold.

“These folks agreed to abide by the result of the split,” she pointed out. “But now they don’t like the results.”

In the end, the Commission found her arguments more persuasive and upheld the original decision.

That left Cole and Patterson frustrated, and saying they would consider appealing the case to the court system.

“It’s a dirty job for the trainers,” Cole told the Commission. “It’s a life-risking job for the horse and jockey. It’s a very poor investment for the owner. But the sport is out there on the racetrack.”

Except sometimes, when it’s in the board room.

Frank Vespe, the founder and publisher of The Racing Biz, has owned, bought, sold, claimed, written, and talked about horses, in varying combinations, for a decade. Email him at [email protected]z.com or follow him on twitter @TheRacingBiz.