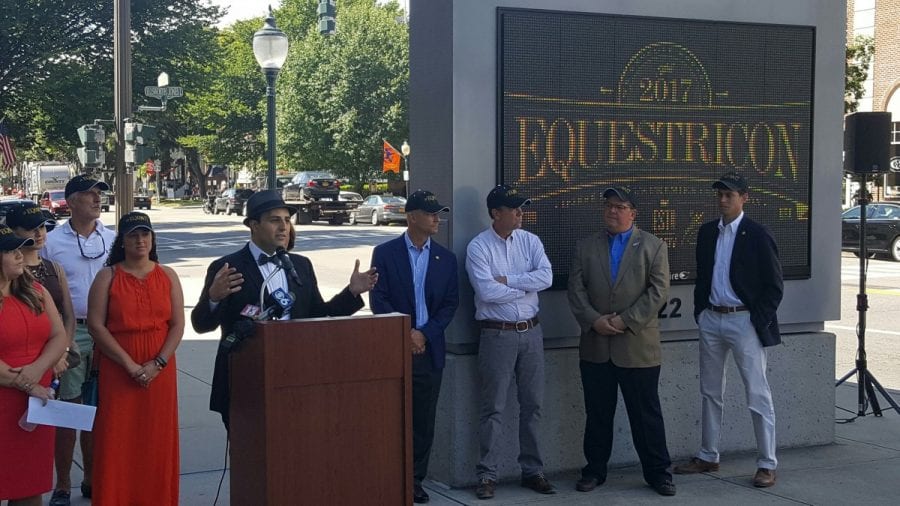 Co-founder Dan Tordjman speaks at the announcement of the initial Equestricon. Photo by Steve Crayne.

Equestricon, LLC., announced today that it will host events throughout Kentucky during Breeders’ Cup week 2018, highlighted by the second-annual Equestricon™ international horse racing convention, fan festival and trade show at the Kentucky International Convention Center (KICC) in Louisville. The convention at KICC will take place on Monday, October 29 and Tuesday, October 30, 2018.

“Those are the big days that anyone planning to attend the Breeders’ Cup should circle on their calendars,” said Kathryn Sharp, co-founder of Equestricon. “But the festivities will actually run all week long starting on the Sunday prior. Thanks to exciting conversations we’ve had with Breeders’ Cup, Churchill Downs Incorporated (CDI) and our various partners, we look forward to offering a cohesive fan experience for those who want to go on farm tours, visit distilleries, enjoy the track, and everything in and around Louisville.”

The inaugural Equestricon, held this past August in Saratoga Springs, NY, featured appearances by hundreds of racing personalities, industry leaders and major racing organizations. The historic event attracted fans, horseplayers, prospective owners and stakeholders from all corners of the sport. More than 1,500 people from 34 states and seven countries attended the first Equestricon.

“We are beyond excited to see Equestricon traveling to our city for this historic week of racing and widespread entertainment,” said Louisville Mayor Greg Fischer. “Equestricon has tapped into everything Louisville, as a community, love about horses and horse racing. We know that based on the event’s success in New York, horse racing’s only fan convention is sure to increase week-long tourism and boost local business.”

For the second consecutive year, the Thoroughbred Aftercare Alliance (TAA) has been named the official charity partner of Equestricon. The TAA and topics on aftercare will again be central to the program at Equestricon, which in 2017 included more than 85 seminars, workshops, panels, networking sessions and other events.

In addition to aftercare, featured topics at Equestricon 2018 will include handicapping, racing photography, horse ownership and breeding. Attendees will have an opportunity to meet and hear from their favorite racing personalities. Convention organizers plan to unveil a new theater, in which select speakers will deliver personal stories and share their perspectives in a setting and style similar to the popular “TED Talks” format.

“What’s great about Equestricon is that it offers something for everyone,” said Peter Rotondo, Breeders’ Cup Vice President of Content. “More than ever before, fans traveling to Kentucky for Breeders’ Cup will have added incentive to get in early and make it a week-long racing experience, unlike any other.”

Sponsors and vendors interested in exhibiting at Equestricon can now find information at equestricon.com/sponsors. In the coming weeks, Equestricon will release a full schedule of events for the convention and trade show, including participating exhibitors, speakers, panelists and other special appearances.