Laurel cancels after jocks say track condition “must be addressed” 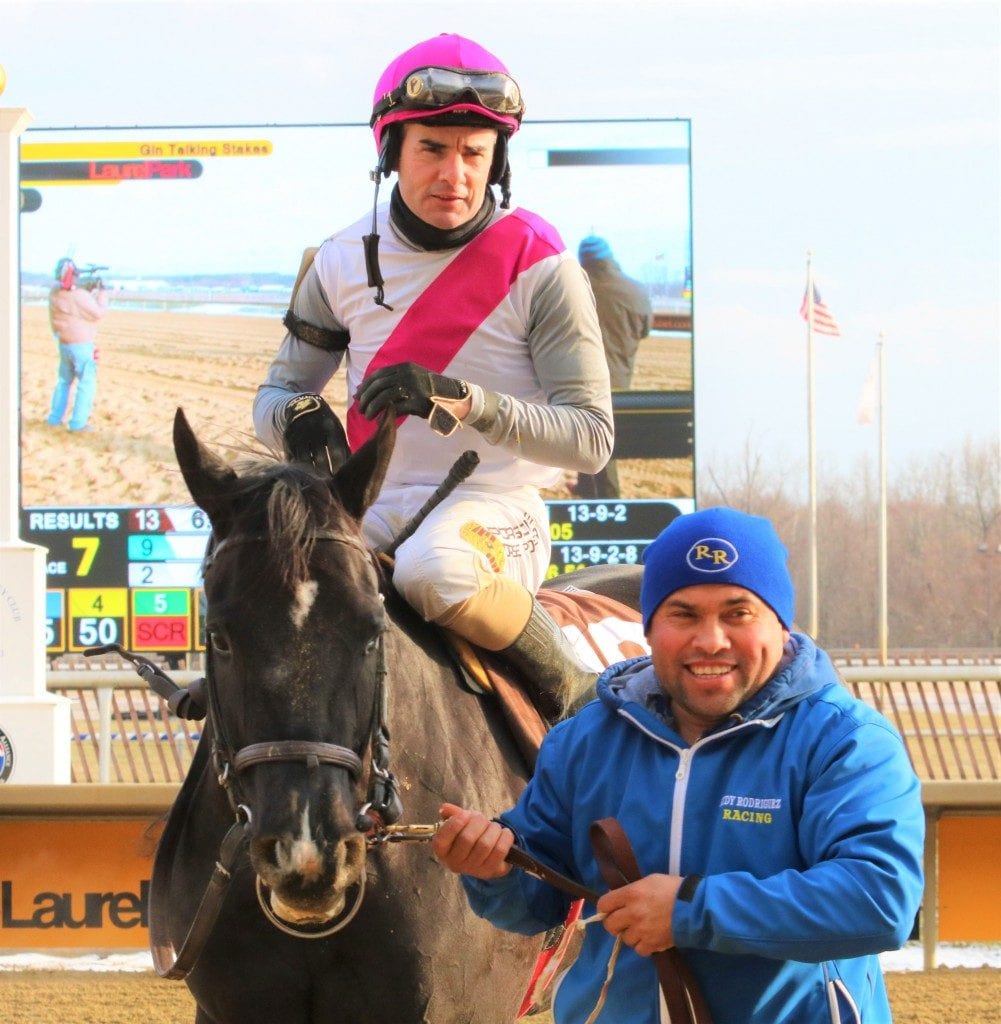 Feargal Lynch and Strategic Dreams won the Gin Talking at Laurel Park – the last race completed on the day. Photo by Dottie Miller.

Following the seventh race when Vertrazzo and jockey Dana Whitney went down shortly after finishing third in the $100,000 Gin Talking Stakes for two-year-old fillies, the jockeys at Laurel Park convened in the jocks room and subsequently voiced to management their concerns over the condition of the racing surface, particularly a spot just past the wire and not far from the paddock.

Whitney was the third jockey of the day to be thrown from his mount after the wire. Two of their horses all went down, and both were able to get up.

As a result, the Maryland Jockey Club canceled the final three races, including a pair of stakes. The MJC listed “deteriorating weather conditions” as the reason for the cancellation. The two stakes, the Thirty Eight Go Go and the Dave’s Friend, have been rescheduled for Friday, January 5.

Jockey Sheldon Russell said that he and the jockeys met soon after the seventh race was made official to express their concerns over the safety of the main track, specifically at the point just past the finish line and prior to the start of the clubhouse turn where Whitney and two other jockeys, J.D. Acosta and Julian Pimentel, had gone down on Saturday. After Russell and the other jockeys agreed that the main track was unsafe in that spot, they expressed their concerns to Maryland Jockey Club President Sal Sinatra, who agreed to cancel the remainder of the card.

“We had some concerns about that same spot on the track right after the wire, especially after two other jockeys went down earlier in the day,” Russell said. “We definitely had some concerns. It seemed like we just lost the track in that one spot. There wasn’t enough time between races to get the track ready. We’re hoping that they can get the track correct so we can have it ready for tomorrow. Other than that we were having a great day. When something like that happens in the same spot three times in one day, it’s something that has to be addressed. Julian went down and Dana went down in the last race and that’s when we decided this has to be addressed.”

Earlier in the day, in virtually the same spot right after the wire, Cheering For Al stumbled and unseated jockey J.D. Acosta. Several races later Renaissance Rosie went down after finishing second in the Politely Stakes. Her jockey, Julian Pimentel, was taken by ambulance to a nearby hospital , while Whitney got up and walked off soon after Vertrazzo went down.

Adam Campola, the chief steward at Laurel Park for the Maryland Racing Commission, said that the stewards had “nothing to do with” the decision.

Campola, a former jockey himself, added that six jockeys had been unseated in that same spot following races in recent weeks and admitted they were fortunate to have escaped serious or fatal injuries to that point.

Sinatra could not be reached directly for comment on Saturday afternoon, but in a press release he blamed winter weather conditions for forcing the cancellation. “As the day went on, conditions deteriorated and we felt it was in the best interests of everyone to cancel the remainder of the races,” Sinatra said.

“It wasn’t too cold today to ride, but that one part of the track after the wire has to be addressed,” Russell said. “We have to make sure they fix the track so we don’t have any more incidents like that again.”

One rider, who requested anonymity, said that a horse he’d worked earlier had stumbled in that spot. He said that he believed that there was a dip in the track there where horses just relaxing after the wire hit the ground differently than they did elsewhere on the track.

Another agreed, saying, “The surface between the one-eighth pole and seven-eighths pole was completely different from the backstretch.”