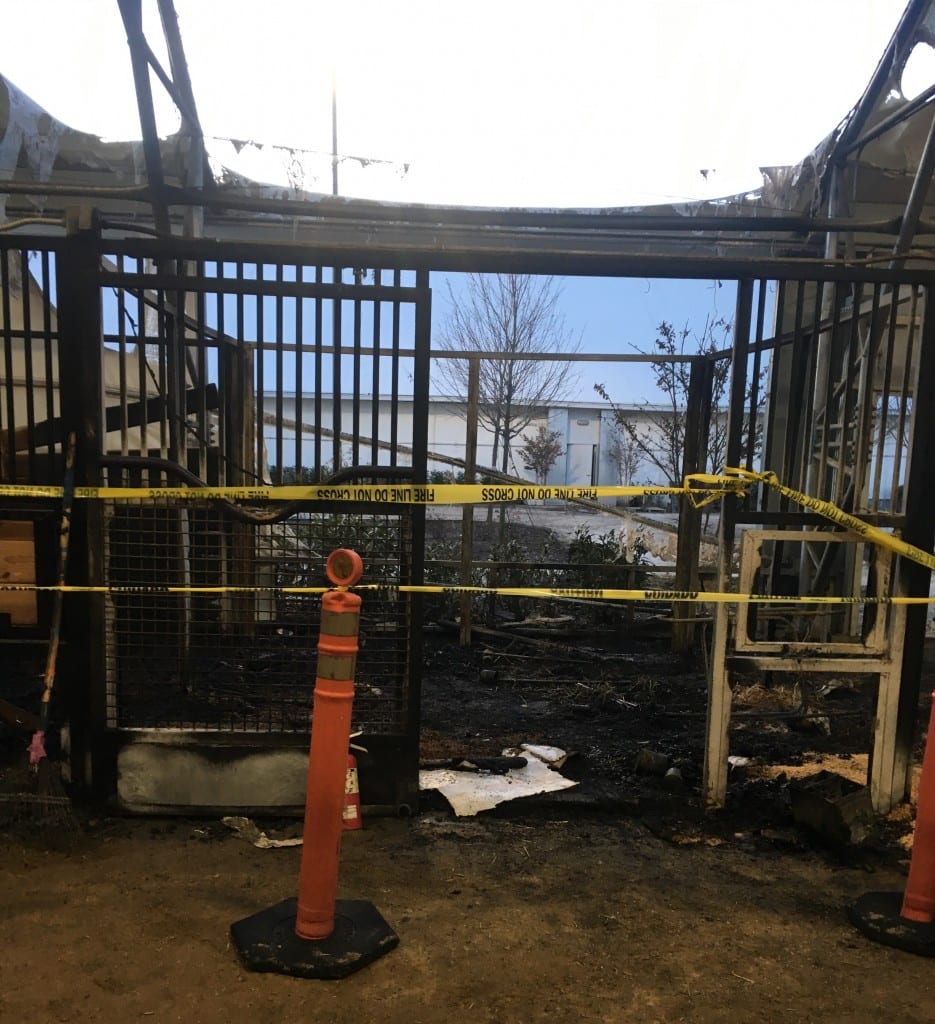 Burned out stall at Laurel Park.

A barn fire Wednesday evening at Laurel Park left the seven-year-old gelding Pappa Portmore dead, filled the barn with smoke, and grew hot enough to melt an ice machine but did not, the track operator said, cause structural damage to the barn.

The other horses in the large barn, which includes the operations of trainers Anthony Farrior, Ollie Figgins, III, Ricky Sillaman, and Stephen Casey, were not evacuated.

“The one horse that died, that really shook me,” Sillaman said. “You don’t want to see any horses go through that.”

Sillaman said that none of his horses had been affected, visually at least. But he cautioned that “you don’t know what lung damage there might have been.”

“After it was all over with, I felt really bad for the horse that was killed and really fortunate that that’s where it ended,” Figgins agreed.

The cause of the fire is not yet known. It broke out in the first of the large, tentlike barns the Maryland Jockey Club has erected on that portion of the backstretch nearest Maryland Route 198 and Brock Bridge Road.

It began, sources said, in a stall that had been converted to use as a tack room and quickly spread to the adjacent stall, which housed Pappa Portmore, a horse who’d been claimed out of his most recent start, December 1, by trainer Anthony Farrior for Super C Racing, Inc. Farrior did not immediately return a phone call.

The fire occurred between 10:00 and 11:00 p.m., with response led by the Laurel Volunteer Fire Department, which dispatched Tower truck 10 to the scene.

People on the grounds described a chaotic situation in which fire crews struggled to enter the affected barn and people living on the backside were asked to provide assistance but then sent to the wrong barn, one on the opposite end of the property.

Entrance to the barns was made more difficult, sources said, because larger entryways that are supposed to be opened and closed electronically do not work properly and must instead be operated manually by maintenance workers.

“Electrical problems have been a mess since we got in the barn,” Sillaman said. “It’s chaos.”

The barn also has no sprinkler system, sources said. Whether that would have mattered in this case is unknown.

“I would feel safer if they had them in there,” Sillaman said.

“We were told at one time we were going to be moved” so the barn could be retrofitted with sprinklers, Figgins added. But when work ground to a halt on a planned third barn, that did not happen.

What’s more, a water line break last night has left the backside without water other than that provided by water trucks. Sillaman said that he was told that the goal was to have water service to the backstretch restored by Friday morning.

All of that left a shaken backstretch Thursday.

“Our heart goes out for everybody that loses a horse like that,” said Kenny Cox, a trainer stabled on the opposite end of the Laurel backside. “Nobody ever wants to see something like that.”