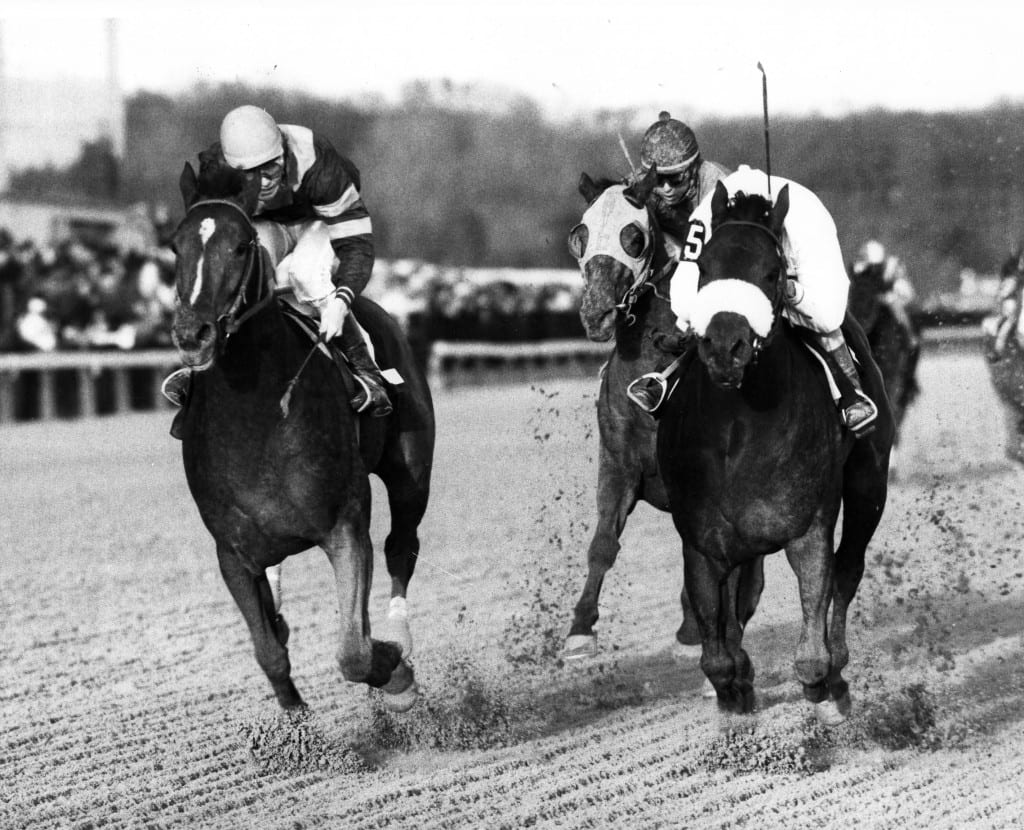 Now, oddly enough, something else has emerged: a news flash.

The 1982 affair had been an expectant homecoming for Caveat, a Cannonade colt bred by Jim Ryan of Ryehill Farm and trained in New York by Hall of Fame-bound Woody Stephens. Ryan had campaigned homebred Maryland champs Smarten, Smart Angle and Heavenly Cause; now came Caveat, whose Maryland debut followed a victory in Belmont’s Prince John and graded-stakes-placed finishes at Keeneland, Aqueduct and Churchill Downs.

What Dixieland Band lacked in accomplishment (four starts, two wins) he brought in regal bearing: first foal of Mississippi Mud, a Grade 1 winner for Delaware-based breeders Bayard and Mary Sharp, by the dynastic Northern Dancer, commander of a $250,000 stud fee in 1982.

Dixieland Band and Deputed Testamony shared 9-1 odds in the Maryland Juvenile; so ended the similarities. Spawned from Traffic Cop (stud fee $500 to $1,000) and the unproven Prove It mare Proof Requested, Deputed Testamony made his first three starts against claimers, winning two.

“His pedigree didn’t dictate he would be claimed,” said Boniface, who bred the colt and co-owned him with Francis “Buddy” Sears. Boniface nonetheless deemed Deputed Testamony a burgeoning overachiever, and backed the notion by supplementing the colt to the Maryland Juvenile for $5,000.

“My horse is all heart,” he said at the time. “He may be a Derby contender if he continues to improve.”

In 1982, before track reconfiguration, Laurel’s 1 1/16-mile races began from the mile chute and finished at the second wire. The Selima Stakes was the only other race that used the auxiliary finish line then, a potential challenge for local jockeys unaccustomed to the switch.

And so Boniface effected a plan. He said he told a pony girl to quietly remind Miller at the gate about the second wire.

“Now, this is an inside story,” said Boniface, son of a newspaperman, “but you can use it. “

From the time his apprenticeship began in the fall of 1980, Miller had navigated horses about Laurel and other regional tracks with a cool head and knowing hands, winning three meet titles in 1981 and three more in ’82. Even then, barely into his 20s, he said he had no hearing in his right ear and partial hearing in his left.

Bill Passmore generally rode for owner Sharp and trainer Charlie Peoples, but bypassed Dixieland Band for the mount on No Body Else’s, lone filly in the nine-horse field. With that, Vince “Jimbo” Bracciale Jr. swung atop Dixieland Band and put him just off the pacesetting filly through the backstretch and into the turn.

As Dixieland Band took over at the mouth of the homestretch, Miller had Deputed Testamony gaining some four lengths back, whereupon Eddie Maple and Caveat swept by and moved within a length of the front-runner. But Caveat’s rally fizzled, and Deputed Testamony revved past him to join Dixieland Band on the lead as they reached the first wire before a pre-simulcast crowd of 12,559.

Curiously, no newspaper account of the race indicated that Miller stopped riding prematurely, but Boniface said it happened and Miller acknowledged it.

“Damn if he didn’t misjudge that finish,” Boniface said recently, with vintage storytelling lilt. “I think he had it won at the first line; he started to stand up, and then he got back down and he just got beat. “

Three and a half decades since the race and 21 years since he left riding altogether for work as a Baltimore-area real estate broker, Miller recited the stretch run with eerie clarity.

“The challenge I was having was that Deputed Testamony was bearing in pretty badly, and he was laying all over the top of Dixieland Band, so I was struggling just to keep him straight,” he said. “And so in order not to keep bumping Dixieland Band and cause a foul . . . I had momentarily forgotten that we were supposed to go to the second finish line, so I stood up for, like, a jump and a half, and then dropped back down. But I still ran into the same issue – I couldn’t keep him off the horse next door. So I’m pulling on my right-hand rein to keep him off Dixieland Band, and it’s difficult to push a horse forward when you’re pulling on the rein. So subsequently, Dixieland Band had the edge because I couldn’t let Deputed Testamony run at full speed.

“I’m sure the pony girl did remind me to go the second finish line. But when you’ve got a horse bearing in that strongly, it’s the last thing on your mind . . . And that’s not to make excuses for me standing up, because I’m supposed to be a professional. I’m not supposed to make those mistakes regardless of what’s going on around me. And so the Bonifaces had every right to be a little miffed that I misjudged and I stood up at the wrong finish line.”

After Dixieland Band won the head-bob, Miller decidedly spoke no excuses to Boniface. Word of the colt’s stretch-running peccadillos, he implied, might offend the connections.

“I had never told them that he was bearing in badly, because usually that’s a function there’s a problem with the horse somewhere, somehow,” Miller said. “It may be minor, it may be more – so I just left it unsaid. And that was the story that was left untold.”

Deputed Testamony’s next start, the Play the Palace Stakes, left no questions. He revised the Meadowlands one-mile record under Herb McCauley, who eventually would have his choice of Boniface-trained Preakness mounts. After McCauley embraced the better-credentialed Parfaitement, Boniface offered a ride on Deputed Testamony to Laffit Pincay Jr., then Jean-Luc Samyn; both declined. Such were the cosmic portents of the ’83 Preakness: The mount fell to Miller, who sent Deputed Testamony splashing along the Pimlico rail to an upset victory.

The outcome excited a raucous hometown frolic, brought Miller muted absolution and offered an early toast to the merits of the Maryland Juvenile Championship.