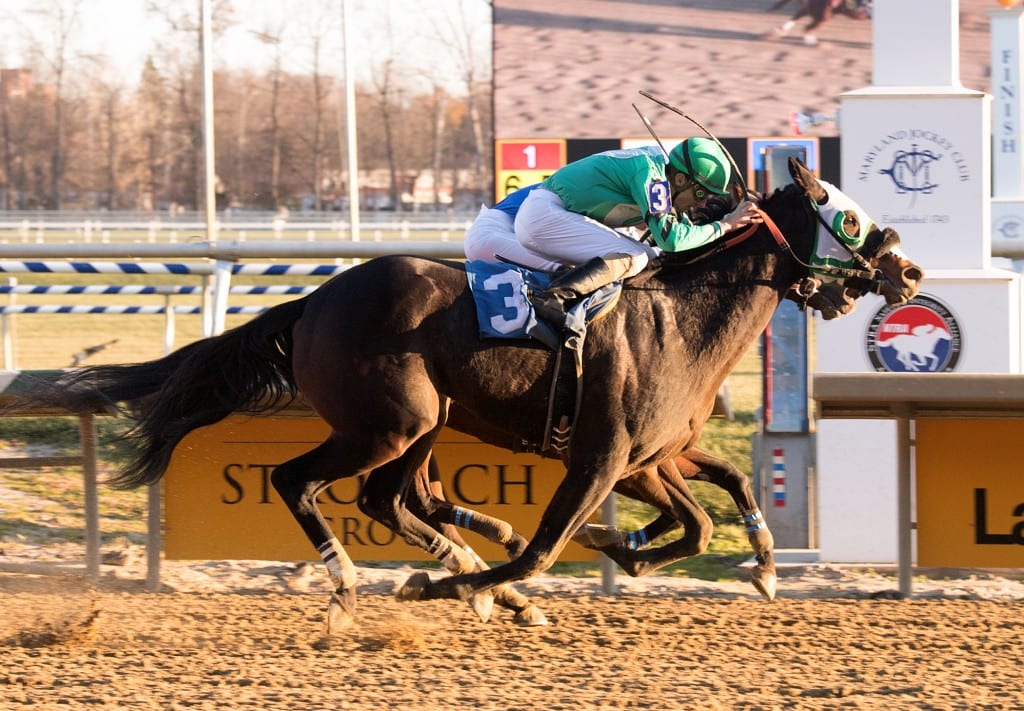 Moon Virginia was up late to score in the feature at Laurel Park. Photo by Jim McCue, Maryland Jockey Club.

Talk about a good weekend.

Trainer Hamilton Smith won Saturday’s $50,000 Donna Freyer Stakes with longshot Fanniebellefleming, and he added to that Sunday when Moon Virginia, a homebred for him and Fred and Deborah Greene, surged late to win the day’s feature, a $47,000 allowance test.

Moon Virginia, with Sheldon Russell in the irons, came with a steady rally down the center of the track to edge multiple graded-stakes placed favorite Sine Wave by a head in the third-level optional claiming allowance for fillies and mares three-years-old and up.

A Maryland-bred four-year-old Jump Start filly, Moon Virginia ($14) ran seven furlongs in 1:24.73 over a fast main track to snap a six-race losing streak dating back to October 2016. She had run second and third in back-to-back stakes heading into Sunday’s race.

“I was a little concerned about the distance before the race was run, but turning for home I thought she had a good shot because she was rolling,” said winning trainer Hamilton Smith. “I looked at the fractions and they were pretty quick early, so that helped us a little bit.”

Smith is the co-breeder and owner of Moon Virginia with Fred and Deborah Greene.

“They play a big part in it. We talk over who we’re going to breed to and so forth, so it’s very nice. It really is,” Smith said. “I’m very proud of her.”

Smith said he will take a look at the $100,000 Thirty Eight Go Go for fillies and mares 3 and older going one mile at Laurel Park Dec. 30 for Moon Virginia.

Russell, who won two on the day, posted six wins from 18 starts over the weekend to lead all local jockeys. He’s second at the meeting with 32 wins, seven behind Jevian Toledo.