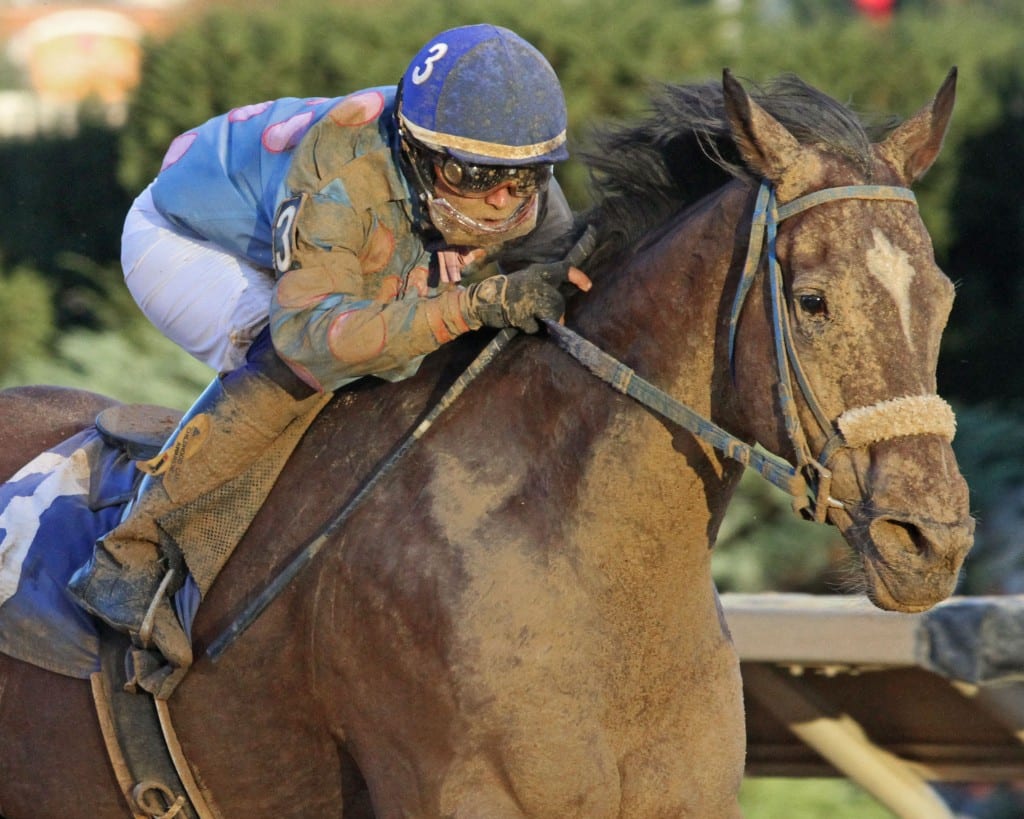 Greenway Court was along late to win the It’s Only Money Stakes. Photo by Coady Photography.

In the moments after watching his aging, talented homebred Greenway Court capture the $50,000 It’s Only Money Stakes for the fourth time in the last five years by getting the one-turn dash distance in 52.63, trainer James W. Casey remarked that the upcoming West Virginia Dash For Cash Breeders Classics here on Saturday, October 14 could be the final start for the eight-year-old Windsor Castle gelding.

“I hate to stop with a horse when he’s doing so good, but he’s getting older and if they slip a little bit then they really start to lose interest,” Casey said. “He loves this track and he loves the distance [of 4 1/2-furlongs]. I was a little surprised he was the fourth choice [in the wagering]. I’m definitely going to run him back in the Dash For Cash. But after that I might retire him and make him an outrider pony. He’s got that type of disposition and he loves being around the track.”

Greenway Court had made only one start last month after winning the West Virginia Dash For Cash last fall as the 2-1 second choice, finishing seventh, beaten 18 lengths, as a 13-1 outsider in a seven-furlong allowance. That distance has hardly been ideal for Greenway Court over the years and it was not the return race that Casey had wanted, but the veteran trainer-breeder remarked that the track racing office had not been able to fill one-turn allowance affairs.

“You know, I probably entered him 10-15 times since January,” Casey said. “But they were never able to get more than five horses for that one-turn race, so they never went with it. Seven furlongs was not the race I wanted for him first start back because he had been training really good, but that’s all they had. He went to the front and then tired, but he got something out of it. He was doing really good coming into [the It’s Only Money] and I’ll run him back here next month in the Dash For Cash. But after that, I might retire him.”

Greenway Court made only four starts last season at age seven, winning the Dash For Cash after running third in the It’s Only Money, a race he had won the three previous years. In 33 career outings, Greenway Court has now won 17 times and banked over $450,000, and he has recorded 16 victories and earned over $400,000 in 24 attempts at the one-turn dash distance over the Charles Town strip.

One race earlier on the card, Casey’s homebred B’s Wild Cork lived up to her role as the 6-5 favorite in a two-turn maiden special weight event for state-bred two-year-old fillies when she rallied inside down the backside and outfought Imagoodchatterbug on the far turn and edged clear late to a three-length score by getting the 6 1/2-furlongs in 1:22.65. B’s Wild Cork had finished second as the solid choice in her previous outing and garnered her diploma in her fourth try for Casey, who expects the filly to continue progressing.

“I think she’s going to be okay,” Casey said. “She seems like she’s getting a little better with each start. Her first three races were going one turn here and she always seemed like she wanted a little more distance. She’s just the opposite of Greenway Court. He likes to run short, but she seems like she wants to go a little further. I like her.”

Three races after Greenway Court prevailed in the It’s Only Money Stakes, Noblame (J.D. Acosta) lived up to her billing as the 2-5 favorite in the $50,000 Rachel’s Turn Stakes for state-bred two-year-old fillies when she pressed the pace three-wide down the backside and through the far turn and then drew clear to a six-length score in 52.27, posting a faster clocking than her older male peers. A daughter of Breeders Cup Classic hero Blame out of the Ecton Park mare Stolen Heart, Noblame has won all three of her starts for trainer Joe Sharp and impressed Acosta who had climbed aboard her for the first time.

“A lot of times those horses come here from other tracks and they show speed on paper, but then they come here and it’s a while different type of speed,” Acosta said. “Here, you have to hustle coming out of the gate. I didn’t really push her too much down the backside, but the other two fillies inside of me were really being ridden hard. Nearing the quarter pole, I still had plenty of horse left and I wanted her to relax a little bit in the lane. She was doing it all on her own. I never really asked her. This track is really dead, so 52 and change is really fast.”

Noblame had won her first two starts against open company at Indiana Grand for sharp, defeating maiden special weight foes by one-half length in her career debut on July 7 then scoring in an allowance race by two lengths six weeks later on August 24 for Sharp and owners Wayne Sanders and Larry Hirsch. Sharp was not present for the race, but Acosta is already looking forward to riding her back next month in the $80,000 Triple Crown Nutrition Breeders Classic here for state-bred juvenile fillies.

“If she comes back here next month, I will definitely come back here to ride her.” Acosta said.

Then one race later in the $50,000 Henry Mercer Stakes for state-bred two-year-old colts and geldings, William And Mary (Antonio Lopez) broke alertly, shook off brief pressure from Punch Your Brother (Katie Davis) through the far turn then drew clear in the lane to a seven-length score in 52.02 for the one-turn dash distance. A juvenile gelded son of Windsor Castle owned, bred and trained by James W. Casey, William And Mary remained unbeaten in two starts and impressed both his trainer and his rider with his speed and potential.

“I always knew he was the best two-year-old that I had this year,” Casey said. “He didn’t have a great trip first time out and he still won that race and he was training super coming into this race. He seems like he wants to go further. When he worked a half-mile, he galloped out faster than he worked. He’ll be right back here for Breeders Classics and then he’s got the Tri-State Futurity and West Virginia Futurity. I think he’ll get better in the longer races. He acts like he wants to go longer.”

“He’s got a lot of potential,” Lopez said. “I never really got after him. Once I got rid of the eight horse, he was doing it so easy. I hit him once at the top of the lane and that was it. If he stays sound and healthy, he’s going to be really good here in October and November.”