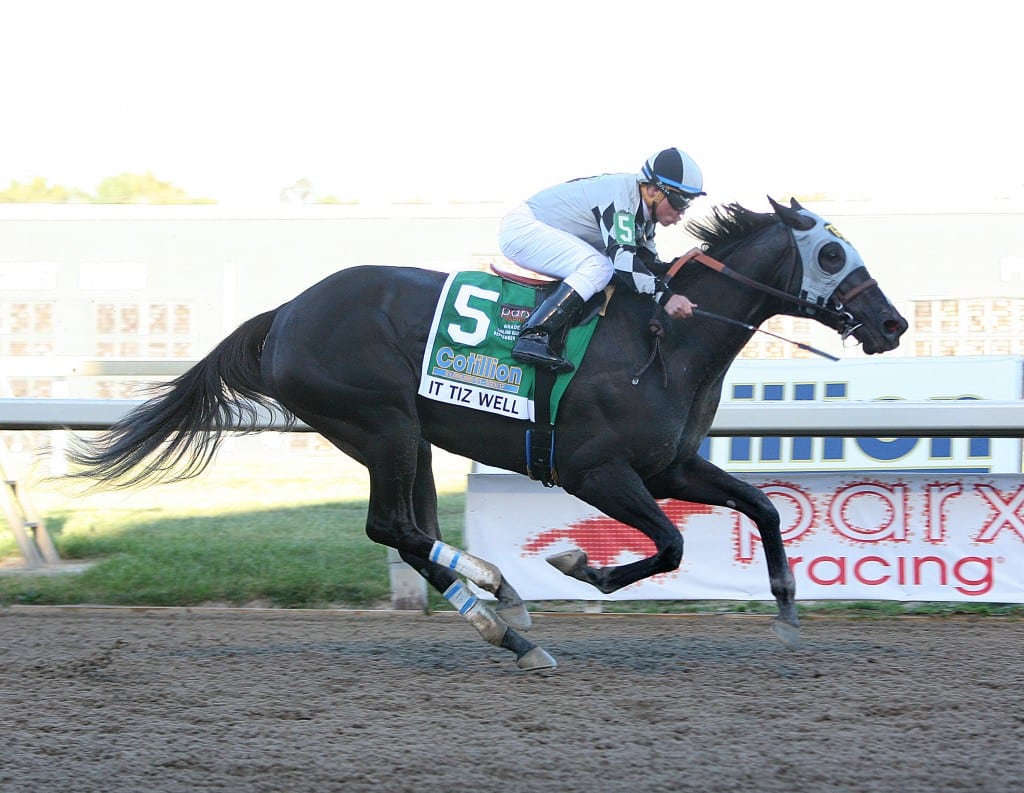 The ladies were the center of attention atop the racing world in the 48th running of the Grade 1, $1 million Cotillion, but the queen of the dance, multiple Grade 1 winner Abel Tasman was dethroned, and instead it was It Tiz Well who came on late under jockey Drayden Van Dyke to win in 1:43.67 for the 1 1/16 miles for trainer Jerry Hollendorfer.

“Very satisfying,” said Dan Ward, assistant trainer to Jerry Hollendorfer. “She has been running good races and improving all the time. I thought we had a good chance. I thought we might get that trip. She did a super job.”

The victory was the first Grade 1 victory for the daughter of Arch, and came after she failed to hold off Elate in the Grade 1 Alabama. It was her third graded stakes win after she captured the Grade 3 Delaware Oaks two starts previously. Her first came in the Grade 3 Honeybee at Oaklawn Park on March 11.

“She ran today like she ran at Delaware Park [July 8, Delaware Oaks],” Van Dyke said. “Set off the pace and relaxed, and when I called upon her she responded. She was perfect.  When I saw Mike [Smith aboard favorite Abel Tasman] coming up on the inside, and I sat off her and waited and they kind of went away from me for a few seconds and she was there for me the whole time.”

Upon the early fractions Juddmonte Farms Lockdown set the pace under jockey Luis Saez subbing in for the injured Jose Ortiz, who is off mounts for the weekend with a bruised knee. Saez kept the daughter by First Defence closer in a spot she had never been before in four previous starts, but speed or close to it was the favorable spot to be.

She was trying really hard,” Saez said. “She gave me everything she had. She was pretty comfortable early and she put herself in a pretty good spot.  When she went to the front I thought this is good, this is perfect.  I didn’t want to fight with her so I let her do her thing.”

Abel Tasman, the 1 to 2 favorite trying to stretch her streak of three Grade 1s to another was well off the pace in the early stages after the first quarter in 23.26, and the half-mile in 47.27 was run. Unlike the bold early move she was given by hall of Fame jockey Mike Smith in her last victory, the Coaching Club American Oaks, the filly by Quality Road seemed to take her own approach to beating her foes and sparked a high speed cruise along the rail to catch and confront Lockdown at the end of the backside.

With Lockdown to her outside, the duo hit the top of the stretch, and the crowd believed they were seeing the rest of Abel Tasman’s launch to victory. Instead Lockdown, running a more favorable distance today than she had in her sixth place finish in the 1 1/ 4 mile Alabama, had more left in the tank.

I didn’t want to take it that soon,” Smith said. “I was hoping to get finish on the lead.  She has been breaking slow of late than she wants to gather herself up and wants to catch up at one time, too much to do. I could have stayed way wide, but I would have been to wide and she still would have wanted to make that move and I would have been to wide, the inside is wide open and she was pulling me so hard and she just took me there and I thought maybe she could pull it off from here but it was too much to do. She’ll be fine for the Breeders’ Cup.  It wasn’t one of her best but she ran well.”

Abel Tasman had been a promising 2 year-old filly in the Simon Callaghan barn with three victories from four starts topped by her win in the Grade 1 Starlet Stakes to close out her year. Following her second place finish in the Grade 3 Santa Isabel Stakes she was transferred by her owners China Horse Club International to Bob Baffert’s barn.

A second place finish in the Grade 1 Santa Anita Oaks led Smith to ask Baffert about adding blinkers to her in a workout. Reluctantly, Baffert agreed, and after both Hall of Fame minds went forward, Abel Tasman rattled off three Grade 1 victories in the Kentucky Oaks, Acorn and the Coaching Club American Oaks. Now Baffert may shed the blinkers in an effort to calm her down during the early stages.

“She got real rank with him, she took off with him it, and it was unfortunate. It was a ridiculous run. We just we might have to take the blinkers off. I guess we just have to turn the page.”