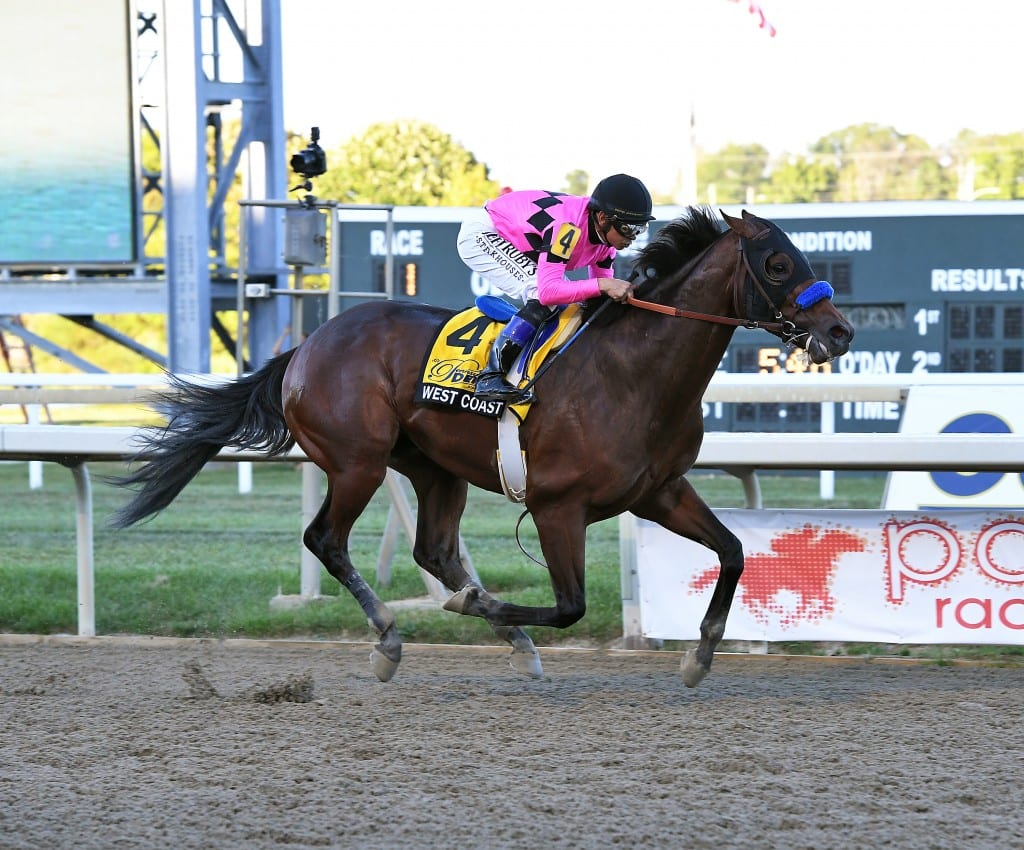 The muddled merry go round regarding this year’s 3 year-old male champion may have been narrowed down to Gary and Mary West’s colt West Coast, who stacked the cards in his favor with a strong 7 ¼ length winning performance under Hall of Fame rider Mike Smith in the Grade 1, $1 million Pennsylvania Derby.

The victory was the fifth straight for the son of Flatter, and second Grade 1 in a row after he responded to multiple late challenges in the Travers, but drew on to win by 3 ¼ lengths. That was his second graded stakes performance after closing to win the Grade 3 Los Alamitos Derby.

‘This horse is just getting better and better,” Baffert said. “We thought he would run a big race, and he was calm in the paddock. He is just a big boy. It was nice the way he ran. He did it pretty easily.”

West Coast sat second to the outside of front running Outplay and the two took the field into the first turn while Game Over followed three wide in third with Timeline fourth and Irish War Cry fifth. Irap sat patiently in sixth and the rest of the field of 10 followed, but after a half-mile was run in 47.24. West Coast put a head in front before Outplay found fought back and relieved his margin. Three quarters of a mile was clocked in 1:11.18, and West Coast was now a length behind, but Smith allowed his colt to run, and within a few strides he was in front of a tiring Outplay, as Irap, and a late charging Giuseppe the Great was making a move from ninth.

Irap took a few erratic strides in mid-stretch, and with Mario Gutierrez trying to straighten his course, the rest were strung about to his inside. West Coast lengthened his advantage, and Irap settled for second a length ahead of Giuseppe the Great, who once again outran his long odds as he did in his second place finish in the Grade 2 Jim Dandy at Saratoga. West Coast finished the 1 1/8 mile affair in 1:49.91. The romp was the second Derby victory for Hall of Fame trainer Bob Baffert after Bayern ran a record setting 1:46.96 for the 1 1/8 miles in 2014.

“I felt real good on the first turn, Baffert said. “Mike had him in a good position kept him on the outside. I told him don’t go near the rail. At the 3/8ths pole he had a lot of horse and I was afraid he was going to get a little bored out there [West Coast]. He’s just learning how to run and to have a three-year-old this time of year and the way he won the Travers and now winning this race he is going to be horse to reckon.”

For Smith, who seems to return with an unbeatable vengeance once he loses a Grade 1 race on a program as he did once race previously in the Cotillion with runner-up Abel Tasman, he is confident in his colt.

“He is really a good horse,” Smith said. “He is just better than they are right now, as far as three year olds go.”

With Kentucky Derby winner Always Dreaming, Preakness winner Cloud Computing and Belmont Stakes winner Tapwrit all out of action for the remainder of the year, the 3 year-old championship West Coast is now atop the division, and could be the first to benefit from his PA Derby win since the race was upgraded to Grade 1 status this year after running as a Grade 2 since 2004.

Now headed towards a start in the Breeders’ Cup on November 3 and 4, West Coast could give Baffert his eighth 3 year-old champion male, and third in a row following Arrogate in 2016, and Triple Crown winner American Pharoah in 2015.