“They do all the work”: Maryland Pride jocks credit trainers 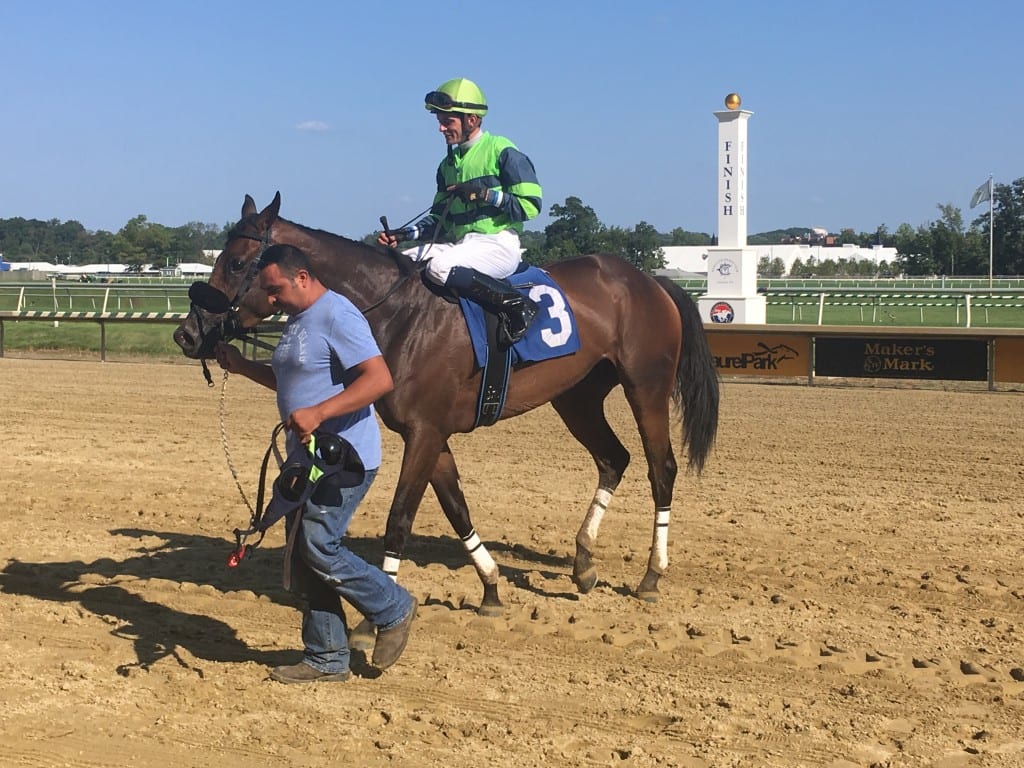 Sheldon Russell and Bawlmer Hon upset the All Brandy Stakes. Photo by The Racing Biz.

One day after a severe thunderstorm brought heavy rains throughout the Mid-Atlantic region, Laurel Park offered its “Maryland Pride Day” card that included three stakes, two of them on the turf, on a day when even remnants of the violent storms the day before were a distant memory other than moving several overnight races from the turf to the main track. Fittingly, three different jockeys prevailed in that trio of events for Maryland-bred runners.

In the first of the three stakes races on the card, Just Howard rallied from just off the pace to overhaul favored English Minister and held safe the late bids of Ghost Bay and Dothat Dance to score by nearly two lengths in 1:57.10, a pedestrian time for the nine furlongs over a yielding turf course. Just Howard, bred by the late Howard Bender and named in his honor by owner Skeedattle Associaties, notched his second straight stakes and his third consecutive victory overall, all with Alex Cintron aboard.

“The biggest difference with him has been the blinkers,” said Cintron, who was quick to credit the equipment change by trainer Graham Motion for the three-race win streak. “He’s a lot better with the blinkers. Normally, I like to save ground on the turf. But the rail is so wet and so deep, I was trying to get off the rail down the backside. When I got him clear into the firmer portion of the track, like maybe the six or seven path, he really started to respond.”

Cintron first climbed aboard Just Howard three starts back when the sophomore son of English Channel rallied along the rail at Pimlico to win a two-turn maiden special weight event on the grass to garner his diploma in his sixth career try. Then less than two months later in his next start, Cintron guided Just Howard to a determined victory in the Caveat Stakes for Maryland-breds over the Laurel grass on July 15. On Saturday afternoon, Just Howard recorded his third straight score with blinkers and Cintron by overcoming the yielding course.

“He’s getting better with every start,” Cintron said. “He just keeps improving. I think the blinkers really made the difference. He’s always determined. Even today we were spinning our wheels on the inside and then when I got him outside he responded. When another horse came to me, he really dug in.”

One race later in the $75,000 Miss Disco for state-bred three-year-old fillies, Crabcakes (Forest Boyce) lived up to her role as the 2-1 favorite when she overhauled early leaders Troublesome and Hailey’s Flip to score by two lengths in 1:08.77, a sparkling time for the six-furlong affair. A sophomore daughter of Great Notion trained by Bernie Houghton for owner-breeder Buckingham Farm [the late Binnie Houghton], Crabcakes notched her second win in six starts this year and now owns four wins and nearly $200,000 banked from eight career tries.

“Bernie did a great job getting this filly ready for this race,” Boyce said. “They do all the hard work and we just ride them and look to get around there without getting hurt. She took the lead turning for home and she just kept going. I knew I had Hailey’s Flip beat turning for home, I was just looking to see if anyone else was coming. My first stakes win was aboard Fascinatin’ Rhythm for Buckingham Farm. The best part about this game is riding for the families.”

Crabcakes emerged on the scene last fall by winning her career debut at Penn National against maiden special weight foes then came right back one week later to capture the $100,000 Maryland Juvenile Filly Championship at Laurel Park. Crabcakes then won her sophomore debut against allowance foes at Laurel in January, but she had been second in three stakes tries since then, including the Wide Country and Alma North at Laurel. On Saturday afternoon Crabcakes put everything together in impressive fashion to prevail in the Miss Disco for her late owner-breeder.

Then one race later on the card, Balwmer Hon (Sheldon Russell) posted a 9-1 upset in the nine-furlong All Brandy Stakes for state-bred fillies and mares over the yielding turf course. A four-year-old daughter of Silver Train trained by Mark Shuman for the Runaway Point Farms LLC, Bawlmer Hon was bred by Dr. Tom Bowman and wife Chris Bowman of Dance Forth Farm near Chestertown. It was her second straight tally and first in a stakes race.

“I rode on the other turf stakes and my horse showed speed and gave way,” Russell said. “So, this horse I wanted to keep her off the rail and keep her clear down the backside. On the far turn she really started to travel well and she finished up well. I have to give the trainer credit. Normally, I don’t listen to a lot of trainer instructions before a race, but he said to let her settle and keep her off the fence and then let her roll and she would respond to that. The race went just like that, so I need to give Mark credit for having her ready and giving me some insight.”

After six straight defeats to open the season, Bawlmer Hon has won her last two outings and now owns a 5-3-5 slate and banked nearly $230,000 from 20 lifetime tries. Bawlmer Hon had won three allowance races since earning her diploma, but she had been second, third and fifth in three prior stakes outings. Oddly, she was favored in both the Nellie Morse Stakes and the Conniver Stakes but was second at 24-1 in the Maryland Racing Media Association Handicap in between those other setbacks.

Midway through the card, Margie’s Money won a one-turn maiden special weight event on the main track for state-bred two-year-old fillies, impressing jockey Katie Davis and trainer Hugh McMahon. A juvenile daughter of Great Notion out of the Dance With Ravens mare Margaret Mary, Margie’s Money prevailed handily in her career debut for owner-breeder Terry Shane and impressed her rider despite a few anxious moments leaving the paddock and standing in the starting gate.

“This filly was a little antsy going to the gate,” Davis said of Margie’s Money, who will be the Maryland Pride day triumph as a steppingstone to the Maryland Million Lassie on Oct. 21 following an allowance prep at Laurel next month, according to McMahon. “Thank goodness for the pony rider. She led us to the gate. She was a little antsy in the gate and I wasn’t sure that she would come out running like that because she broke a little on her back feet. But she came out of there running and she finished up really well. I never really had to get after her in the lane.”