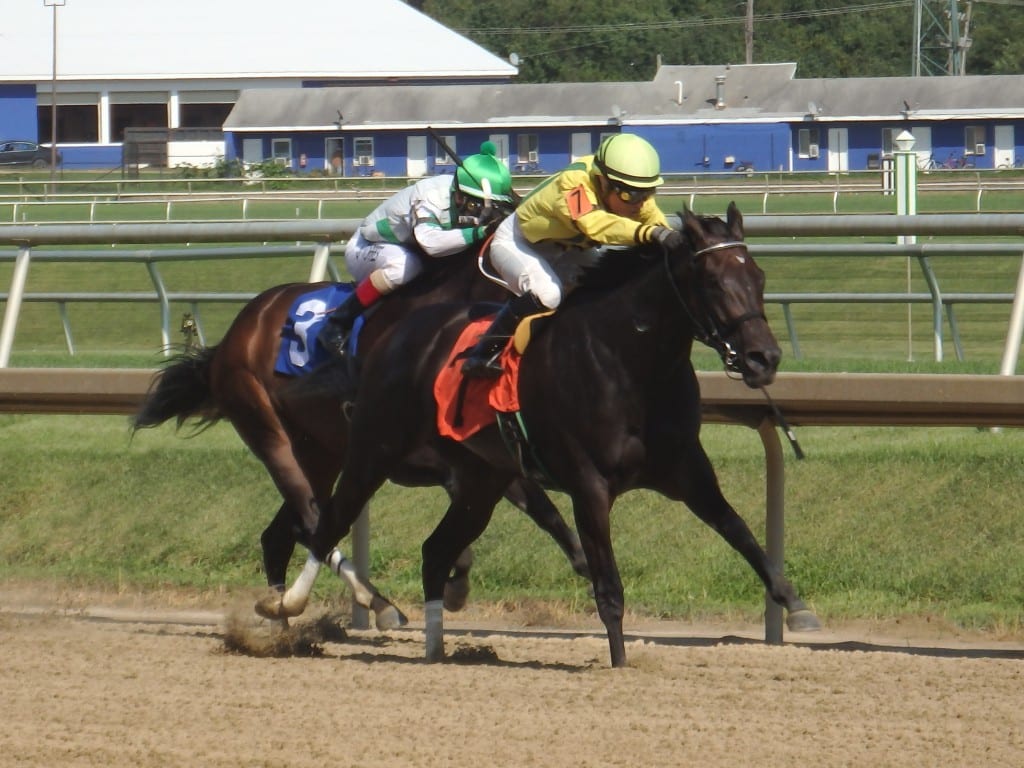 Crabcakes won the Miss Disco Stakes in a sharp 1:08.77. Photo by The Racing Biz.

On a sunny, hot Maryland Pride Day that proved to be a hunch player’s delight — Maryland-themed runners Maryland Pride, Crabcakes, and Bawlmer Hon all scored — absent connections played the biggest role of all.

“Maryland Pride Day is a celebration of Maryland-bred horses,” said Cricket Goodall, the executive director of the Maryland Horse Breeders Association. “We’re so pleased that the theme today upholds that.”

A celebration, yes, but one tinged with sadness.

In the first of the day’s three stakes, three-year-old Just Howard outgamed his older rivals to win the 1 1/8 mile Find Stakes by a neck over a soggy turf course listed as soft. It was the son of English Channel’s third straight victory.

Both Just Howard, who paid $13.20 to win, and longshot runner-up Ghost Bay were bred by the late Howard M. Bender, and Just Howard, owned by Skeedattle Associates, is named for Bender.

“I tell you Howard Bender, Howard was a really good friend and a mentor in this game and our regular business,” said a visibly emotional Willie White, pausing to collect himself. White is one of the Skeedattle team.

“He was a really good friend,” White continued. “When we bought the horse, we hoped something like this could happen. Larry Murray (Bender’s former trainer) was pleased that we bought him. Frank Smith got him in Kentucky for us, and he said, ‘I think we just got lucky, fellas, to get this horse.'”

With Alex Cintron in the irons, Just Howard stalked a glacial pace set by English Minister — 1:18.09 for three-quarters — slipped to the outside, and finished strong to win by a neck. It was Just Howard’s third consecutive victory, all achieved since trainer Graham Motion put blinkers on him.

“It changed him,” White said. “They all knew he was good. He was working good up there, he just wasn’t winning races. As soon as the blinkers went on the mind got focused.”

The very next race, Crabcakes and jockey Forest Boyce scored by 1 1/4 lengths in the Miss Disco Stakes for three-year-old fillies.

The win had extra meaning for trainer Bernie Houghton. His aunt, Binnie Houghton — the owner of Buckingham Farm, which bred and owns Crabcakes — passed away August 7 of a respiratory condition. She was 79.

“My aunt bred her. She did all the breeding,” Bernie Houghton said after the race. “And then she named her Crabcakes, so what a name that was. And she’s a Maryland-bred. Everybody’s here, so it really is a family thing from the day the foal was born right on their farm.”

Among the everybody that was there: Genevieve Pierce of Ennis, MT, Binnie Houghton’s daughter.

“For me it couldn’t be a better win for this filly,” Pierce said. “She has been training great for Bernie and I’m am just so, so grateful that she did this. I know mom’s up there so proud. She just loved this horse. Bernie’s been saying how great she’s been training and she’s just been going well. Mom really loved her and I know she tried to make it for this race.”

Crabcakes stalked the early pace from third before driving to the win over Hailey’s Flip. Running time for the six furlongs over a fast main track was a sharp 1:08.77. It was seven lengths from the runner-up back to show horse Faze the Nation.

“The filly came into this race perfect. I couldn’t have asked for anything better,” Houghton said. “She’s a nice easy horse to train. When I was watching the race, I had a smile on my face the whole way because she was going so good.”

Crabcakes now has four wins from eight starts and just shy of $200,000 in earnings.

A big part of the attraction of days like Maryland Pride Day is how meaningful they are to the participants — and the connections they create, and renew.

“It’s another special day for Maryland, and I think like everything else in Maryland, we just keep taking steps forward a little at a time,” said Willie White.

Added Crabcakes’ jockey Forest Boyce, whose first and most recent stakes victories both came in the yellow and green Buckingham colors, “My first stakes win was aboard Fascinatin’ Rhythm for Buckingham Farm. The best part about this game is riding for the families.”